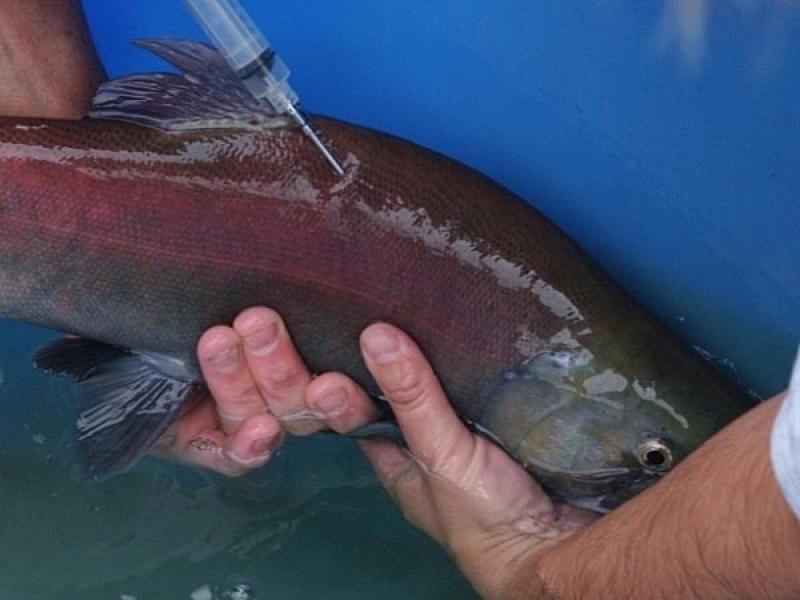 Before the extensive development of hydropower in the region, thousands of sockeye completed an annual migration of over 900 miles from the Pacific Ocean up the Columbia. The epic journey took them to their natal stream and spawning grounds, Redfish Lake Creek in Idaho’s Sawtooth Mountains. Today, eight Federally-operated dams stand between the returning adults and their spawning ground. The dams create hurdles for salmon migrating upstream; they also have more insidious effects, slowing the flow of waters that once carried young salmon downstream to the Pacific Ocean in about two weeks. Currently, the trip takes much longer and the smolts’ gills prematurely begin their adaptation from fresh to salt water before they reach the ocean.

In May of 1991, the population of Redfish Lake Sockeye hovered on the brink of extinction when stories appeared in the media about “Lonesome Larry,” the single adult sockeye returning to Redfish Lake. The dire situation galvanized regulatory and stakeholder groups, resulting in the Redfish Lake Sockeye Captive Broodstock Program, a multi-agency and tribal endeavor. Initiated to protect population genetic structure and to prevent the further decline of Idaho sockeye salmon, the program pools the expertise and efforts of several collaborators including NOAA, the Bonneville Power Administration, the Oregon Department of Fish & Wildlife, Idaho Fish and Game, and the Shoshone-Bannock Tribes.

Center scientists, in collaboration with the Idaho Department of Fish and Game and the Shoshone-Bannock Tribe, rescued and maintained remnants of the population to increase their numbers. From 1990 through 1998, a mere 16 fish returned to the Lake; all were removed as part of a captive broodstock program.

In the Center-developed captive broodstock technology, fish are reared in specialized freshwater and marine systems to ensure high survival and production of eggs, smolts, and pre-spawning adults. The salmon that are produced must be healthy and capable of surviving and reproducing in the wild. In the course of the program’s development, technology improved, and novel techniques emerged. For example, Center scientists collaborated with colleagues at the University of Maryland to advance the spawning time of the captive spawners using a hormone commonly used to treat infertility in humans. The technique improved the survival of offspring, and thus the production of juvenile fish.

Numbers Increase at the End of the Millennium

The end of the millennium saw the beginning of success for the captive broodstock program with the first return of adult Redfish Lake sockeye salmon in 1999. In the following year, over 250 sockeye from the program completed the 950-mile journey from the ocean to the lake.

The success of the sockeye captive broodstock program generated similar efforts with other species. In 2007, approximately 1,400 adults and 200,000 progeny from Snake River sockeye and Chinook salmon were provided to Idaho and Oregon for use in recovery efforts.