Aerial survey will help scientists estimate the abundance of beluga whales and learn more about their habitat and movement patterns. 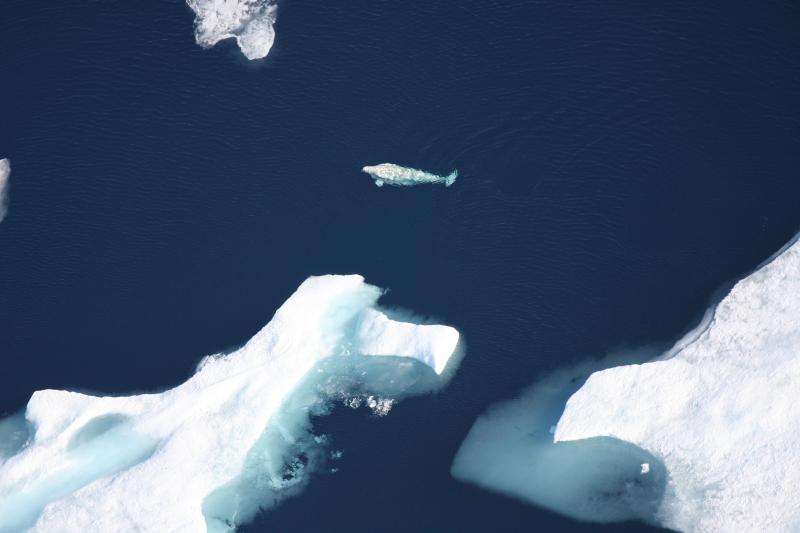 "The 2022 Eastern Bering Sea Beluga Aerial Survey has come to a close. We were able to get excellent coverage of our study area during our 4 survey days (8 total flights) this year. Dense smoke and strong winds prevented a survey today.

A huge thank you to everyone on this email list for the essential contributions you made to the success of this project!

Over the coming weeks, we'll do a final quality check of the data and we'll analyze the data to derive a revised estimate of abundance for Eastern Bering Sea belugas. We look forward to sharing those results with you soon!

I wish our Clearwater Air pilots, Kaden Vacendak and Dana McDonald, a safe journey back to Anchorage tonight.

Signing off with this photo of our survey team to mark the end of the 2022 survey! (From left to right: Dana McDonald, Kim Shelden, Amelia Brower, and Kaden Vacendak.)"

"During our second transect, we encountered one compact group of 48 belugas (event number 312 in the sighting table) among a broader group of belugas located approximately 11 nautical miles northwest of the Yukon delta..."

"Based on the high density of beluga sightings at the southern end of the study area during yesterday's flight and reports of recent beluga sightings near Hooper Bay, we created three new transect lines between Scammon Bay and Hooper Bay. The new lines ran from the coastline to approximately 22 nautical miles offshore. We didn't see any belugas down there today, but we're glad that we put in the effort to look.

All of our beluga sightings were in the middle of the study area. We detected a couple of belugas in Pastol Bay, and a cluster of sightings approximately 40 nautical miles offshore of Unalakleet.

We surveyed Norton and Golovin Bays towards the end of the day, when the winds had picked up. Survey conditions included Beaufort Sea State 3-4 (whitecaps, with some streaking) while we were collecting survey data. We did not detect any belugas on those northernmost transect lines, but we did detect 2 adult belugas and one calf during our transit back to Nome. The strong winds and heavy seas prevented us from completing transect 33."

"In total, we detected 440 belugas, ranging from just North of Scammon Bay all the way up to Shaktoolik... you'll notice in the summary table in the daily report that one sighting on that line had 87 belugas and another nearby sighting had 120 belugas. On the fourth transect from the bottom, we saw one group of 28 belugas and another group of 67 belugas... We did not detect any belugas on the two southernmost lines... If you know of recent beluga sightings in Hooper Bay, please let me know and we'll do our best to get back down there."

"We detected 139 beluga groups, resulting in a total of 251 beluga whale detections... the highest densities of belugas were within about 20 miles of the coast, on the southernmost lines off the Yukon delta."

NOAA Fisheries and the University of Washington Cooperative Institute for Climate, Ocean and Ecosystem Studies are working with co-management partner, the Alaska Beluga Whale Committee, to conduct an aerial survey to count beluga whales from June 20 to July 2.

“The last time we conducted a beluga whale aerial survey in this area was in 2017,” said Megan Ferguson, survey lead, Alaska Fisheries Science Center. “We are conducting the survey to obtain a current abundance estimate and identify habitat use for the Eastern Bering Sea beluga population in Norton Sound and off the Yukon River delta. When compared to previous estimates, it will be possible to estimate the population trend.”

Scientists also hope to learn more about whether the belugas have shifted their behavior or habitat use relative to previous surveys. This information will be particularly valuable to learn how climate change and marine heatwaves in the Bering Sea in the past several years may be affecting the whales.

Previous studies attached satellite transmitters to a few whales from the Eastern Bering Sea. The studies indicated that these whales move south with the sea ice over a wide area in the Bering Sea between Saint Lawrence, Saint Matthew and the Pribilof islands and to western Bristol Bay in winter. They return north to Norton Sound and the mouth of the Yukon River in late spring and summer.

“If we’re going to effectively manage these belugas, we need to understand how many there are and do it enough times on a regular basis so we have good information to know if our harvest is at a safe level,” said Tom Gray, chairman, Alaska Beluga Whale Committee. “Without this information we can’t make informed decisions. We live in changing times, we need to understand our resource.”

The survey will be based out of Nome, Alaska. The primary operating area is in the offshore waters of Norton Sound. The survey will also cover the coastal area south of the sound along the Yukon River delta to Scammon Bay.

All flights will be conducted at a target altitude of 1,000 feet during the survey. This altitude was chosen because it minimizes disturbance to the belugas, but still allows the scientists to make good counts.

“We plan to provide daily updates throughout the survey to share what we are seeing and communicate next-day survey plans so people know what we are doing,” said Ferguson.

The hope is that through these regular communications, tribal governments and local community members will have real-time information about what scientists are doing in the field and where the surveys are being conducted. They can ask questions about the surveys to the survey team or to the Committee.

How to Count Whales from the Air

To get an accurate estimate of how many beluga whales are in the area, the aircraft flies a series of straight lines, also called transects or tracklines, across the beluga’s known range. Scientists onboard the plane count and record all beluga whales sighted along the way.

The number of whales counted during the survey is corrected for whales that could have been missed. This happens when whales are below the surface diving, or because weather conditions, such as whitecaps, or distance to the whales make them hard to see.

By the end of August, NOAA will share preliminary results with interested communities in the region via a Strait Science presentation, media interviews, and requested conference calls. Information collected during the surveys will also be presented during the annual Alaska Beluga Whale Committee meeting this fall. It will also be shared at an eastern Bering Sea management planning workshop where beluga hunter representatives from beluga harvesting communities in Norton Sound and the Yukon are present.

“It's been 5 years since we surveyed this area for belugas and a lot has happened in the ecosystem since then. It is crucial to document the current number and distribution of whales as that will shape thinking on whether steps are needed to further protect the population,” said Verena Gill, supervisory biologist, Protected Resources Division, Alaska Regional Office.