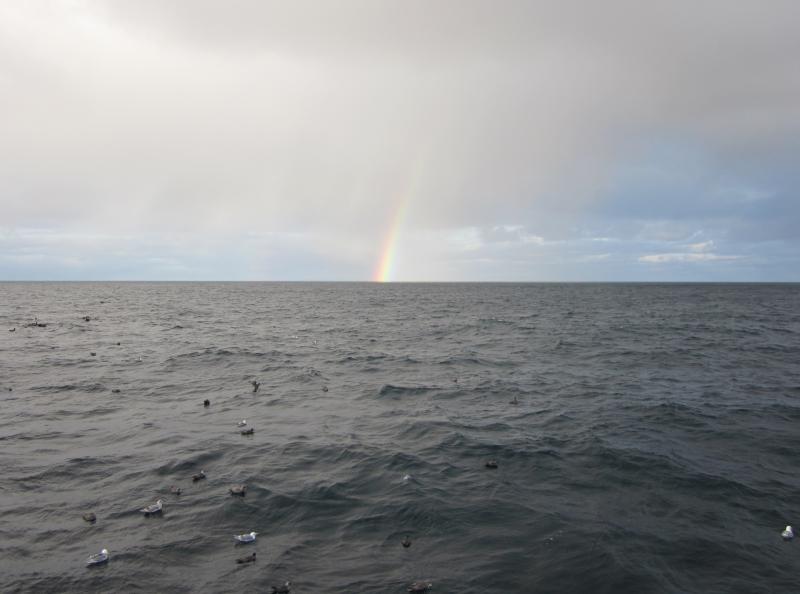 Scientists from NOAA's Alaska Fisheries Science Center and partners have begun another busy survey season off the Alaska coast. Eight surveys are planned in the Gulf of Alaska, Bering Sea, and Chukchi Sea to monitor fish, crab, marine mammals, and marine ecosystems.

During surveys, NOAA scientists sort, weigh, and count species collected by longline or trawl. They will also collect specimens and data on various species, as requested by cooperating scientists, agencies, and institutions.

Longline Survey of the Bering Sea and Gulf of Alaska

The annual longline survey is an important data source for producing timely resource assessments for the North Pacific Fishery Management Council. The 2021 survey continues a 44-year time-series of sablefish and other groundfish species stock trends. The survey is being conducted from May 28 to September 1 aboard the F/V Alaskan Leader, which is a 150-foot freezer longliner.

The 2021 survey begins in Dutch Harbor and makes port calls in Ketchikan, Yakutat, Cordova, and Kodiak. The survey samples the Gulf of Alaska every year, the Bering Sea in odd-numbered years, and the Aleutian Islands in even-numbered years. It surveys at depths from 200 to 1,000 meters. The survey produces catch rates, species compositions, length, and age data for:

The survey also tags and releases a subsample of sablefish, shortspine thornyhead, and Greenland turbot for studying movement behavior and life history. The survey operates on a cost-recovery basis: proceeds from the catch are sold to offset the cost of the vessel charter.

Two vessels will be used to conduct this survey. The F/V Ocean Explorer will be at sea from May 17 to July 30. The F/V Alaska Provider will be at sea from June 3 to August 16. Scientists will monitor trends in the distribution (location and movement patterns) and abundance of groundfish and crab species. This includes important commercial fish species such as walleye pollock, Pacific cod, flatfish, Pacific ocean perch, and other rockfish species. During this multispecies survey, scientists also collect oceanographic data and information on environmental conditions (e.g., water temperature, salinity, dissolved oxygen, chlorophyll and other nutrients).

Survey vessels and crews launch from Dutch Harbor, stop over in Kodiak, and complete the survey in Ketchikan—more than 1,200 miles along the southern Alaska coast. Scientists will also collect a suite of special collections for other investigators including rare sponges, corals, shellfish, and fish and tissue samples. This information will help discriminate different populations from each other and for other studies.

For the past 40 years, NOAA Fisheries has been conducting annual bottom trawl surveys of the  eastern Bering Sea continental shelf. The survey monitors the status and trends in commercial fish and shellfish stocks. Focus species include:

We use estimates of biomass and population from this survey in the annual stock assessments of eastern Bering Sea groundfish and crabs. They are also used in Bering Sea ecosystem models. Additional data collected on the survey are used to improve our understanding of life history of the species and the ecological and physical factors affecting their distribution and abundance.

Scientific staff will conduct the annual shelf survey this year from May 25 to August 1 on the F/V Vesteraalen and from May 28 to August 4 on the F/V Alaska Knight. Vessels will begin sampling at the eastern end of Bristol Bay and progress westward until completed. Once these vessels have completed the eastern Bering Sea survey, they will begin the northern Bering Sea survey. View  near-real time reports on ocean bottom temperatures and planned next stations as the scientists conduct the survey.

The northern Bering Sea survey will begin approximately on August 2 (once the eastern Bering Sea is completed) departing from Nome, Alaska and will run through August 28. Two fishing vessels will be used, F/Vs Alaska Knight and Vesteraalen, to survey Norton Sound and westward to the U.S./Russia maritime boundary. This survey was most recently conducted in 2010, 2017, and 2019. A partial survey of this area was conducted in 2018. We monitor ecosystem conditions due to changes in sea ice extent and movement of fish and crab species more typically found in highest abundance in the south and eastern Bering Sea. View near-real time reports on ocean bottom temperatures and planned next stations as the scientists conduct the survey.

The Southeast Alaska Coastal Monitoring survey has assessed the status of the pelagic ecosystem in Southeast Alaska annually since 1997 using fish, zooplankton, and oceanographic samples. It is one of the longest continuous annual surveys of its type in the North Pacific. This survey will be conducted aboard the Alaska Department of Fish and Game research vessel R/V Medeia. Sampling will occur during two surveys: from June 18 to 23, and from July 26 to August 4. Juvenile fish abundance and oceanographic data collected during the survey provide reliable forecasts of abundance of commercially important species to fisheries managers and stakeholders. Survey data are also used to describe ecological response to climate change. Since 2018, the survey has been conducted through a partnership between NOAA Fisheries and the Alaska Department of Fish and Game. It is currently funded by the Pacific Salmon Commission’s Northern Fund and the 2016 Gulf of Alaska pink salmon fishery disaster relief fund.

The biennial Gulf of Alaska summer acoustic-trawl survey will be conducted aboard the NOAA Ship Oscar Dyson from June 1 to July 11. It will be conducted in two 20-day legs beginning and ending in Kodiak, Alaska. The survey covers the Gulf of Alaska shelf and bays from the Islands of Four Mountains to Yakutat Bay. This year, the length and resolution of the survey has been reduced due to the COVID-19 pandemic. Using a combination of echosounder data and trawl catches, we estimate midwater walleye pollock size and age distribution and abundance. We also collect data on other midwater fish (Pacific Ocean perch, capelin), plankton species (euphausiids), and information on the physical environment (temperature, salinity, etc.). The fish data obtained from the survey are provided to the resource managers, and are an important contribution to annual stock assessments. Data on euphausiids (krill) are incorporated into ecosystem status reports and Ecosystem Socio-economic Profiles.

The Pacific Marine Assessment Program for Protected Species (PacMAPPS): Gulf of Alaska Cetacean Survey will be conducted aboard the NOAA Ship Oscar Dyson from July 28 to  August 26. Very few surveys for cetaceans and whales have been conducted in this region. Quantitative information on their density and distribution, particularly in the offshore area, is limited. Updated temporal and spatial information is needed on the distribution and density of whale species for analyses used in environmental planning documents. It is also used for consultations under the Marine Mammal Protection Act and Endangered Species Act. This project will be conducted with support from the U.S. Navy, which is providing funding for the operational aspects of the survey. Although this survey will be designed to collect information on whales, opportunistic sightings of other marine mammals—such as pinnipeds and sea otters—will also be recorded.

The PacMAPPS surveys supported by the Navy began in 2017, and have so far included:

The Gulf of Alaska is now the only area within the PacMAPPS rotation that remains to be surveyed. Data collected during the survey will provide updated density estimates. This information will support the Navy’s acoustic effects analysis required for environmental planning documents and consultations. These data will also support further understanding and the development of updated population abundance estimates for key whale stocks. Primary target species include North Pacific right, blue, sperm, and fin whales, all of which are endangered, and beaked whales. Visual information will be collected on all species, and acoustic information will be collected for all species except porpoises and some beaked whales.

NOAA Fisheries conducts cooperative surface trawl and ecosystem surveys in support of ecosystem research on salmon and other pelagic nekton in the northern Bering Sea. These surveys have provided annual assessments of the status of salmon stocks and the pelagic ecosystem in the northern Bering Sea since 2002. The 2021 survey will be conducted aboard the F/V Northwest Explorer from August 27 to September 20,  starting and ending in Dutch Harbor, Alaska. Principal funding for the survey is provided by the Alaska Sustainable Salmon Fund in support of research and management of salmon stocks harvested for subsistence purposes. In-kind support is provided by the Alaska Fisheries Science Center, Alaska Department of Fish and Game, and U.S. Fish and Wildlife Service.

"Long term, scientific surveys and the process studies and analysis that accompany them are really important,” added Foy. “The information we collect is essential because these marine ecosystems provide jobs, a stable seafood supply for U.S. citizens, and help preserve a traditional culture based on subsistence harvesting that has endured for centuries.”