A Tale of Two Stocks: Studies of Northern Fur Seals Breeding at the Northern and Southern Extent of the Range 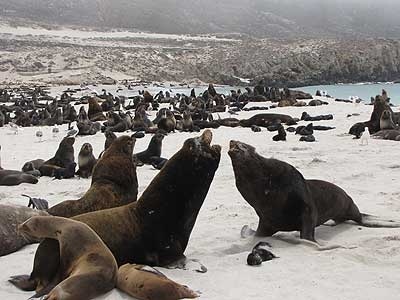 This is a tale of two stocks of northern fur seals (Callorhinus ursinus): the Eastern Pacific stock and the San Miguel Island stock. The Eastern Pacific stock breeds mostly on the Pribilof Islands, Alaska, at the northern extent of the breeding range. This stock was listed as depleted in 1988 under the Marine Mammal Protection Act of 1972, but not all populations within the stock boundaries display similar population trends. Within the Eastern Pacific stock, the Pribilof Islands population, historically the largest breeding population in the world, has declined dramatically over the past 20 years, whereas a new breeding population at Bogoslof Island has increased exponentially since its discovery in 1980. In contrast, the San Miguel Island stock, which breeds mostly on San Miguel Island, California, at the southern extent of the breeding range, is not listed as depleted because it has increased or been stable since its discovery in 1968.

The U.S. Northern Fur Seal Conservation Plan describes research and actions to be taken to restore the Eastern Pacific stock to a healthy population level. One of its aims is to quantify environmental effects on foraging behaviors and identify essential habitat during the annual cycle of northern fur seals throughout the species' range. To do this, the Marine Mammal Laboratory's Alaska and California Current Ecosystem Programs have taken a collaborative approach in their investigations of the Eastern Pacific and San Miguel Island stocks since the 1970s. The goal is to better understand the interplay between the stocks' biophysical environment, diet, foraging behavior and, ultimately, population dynamics. Comparing the two stocks could help identify ecological drivers of the divergent population trends within and between stocks. This research feature article compares the history of the two stocks and highlights NMML's research investigating population dynamics, foraging behaviors of adult females, and their diet.