"Muster up your confidence and go for it!"

March is Women’s History Month. We’ve asked five trailblazing Northeast Fisheries Science Center women scientists to share a little about what drew them to science, how they got here, and what advice they might have for the next generation of women scientists. Candid, honest and full of sage advice, find out more each Wednesday in March as we feature their incredible stories.

Christine Lipsky is a fishery biologist at the Center's Orono Field Station. She studies endangered and threatened anadromous fish species and the many factors that can hamper or promote their recovery. 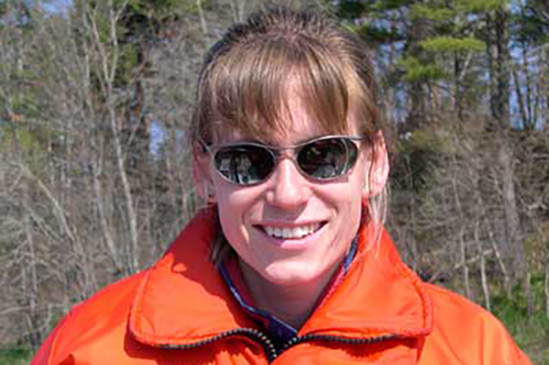 It’s funny thinking about it now - so many of the things I did as a kid can be looked at as having an interest in science. When I was a kid, it was all just fun, play, and curiosity. I baked cakes and cookies as much as possible, and I loved that I knew the difference between the way baking soda and baking powder worked. I read about it in a cookbook, and it just made so much sense! When my family got a cat, I was curious about animal biology and I gave the cat a thorough exam, thinking that it was just like veterinarians do. It was then that I proudly announced to my parents that she was actually a he, contrary to what we were told by my aunt, who gave us the cat. I ended up being right. And my dad’s favorite television channel was (and still is) The Weather Channel, so by spending time with him, I learned about temperatures and dew points, and the big question of the day was always should we light the woodstove today? I also spent a lot of time outside near my home in Connecticut, watching ants in the driveway, examining animal tracks in the woods, climbing trees, camping, and fishing. It connected me to the natural world, and made me realize how fragile nature is. I saw other people (adults!) abusing fish, carving messages in trees, and I wanted to do something about it. I guess I always just assumed that all kids were just like me, and that they all had the same interests

2. When did you know you were going to be a scientist?

There wasn’t actually a specific moment that I knew; it was more like all my childhood experiences lead me in that direction. Even as a kid, I knew that I liked problems with solid answers. I asked a TON of questions, the kind that all parents dread – the ones that start with “Why?” I remember trying to build a Rube Goldberg machine for a 7th grade science class. It’s basically a device that completes a simple task in a complex way. A basic example is when you knock over a long row of dominoes, they push a ball down a chute, and then the ball falls into a hole, connecting a circuit…all to turn on a light. I was thinking that it was the coolest thing that I could ever imagine doing. It allowed me use problem solving skills while letting me think outside the box, which was not typical for school assignments. Even though my machine didn’t end up working, I loved my teacher for giving us that assignment. Mrs. Johnson used a lot of hands-on activities in her classroom to get her messages across. She really knew how to keep things interesting!

3. What professional accomplishment is your proudest so far?

I’m most proud of being lead author on my first published manuscript, an article about tag identification in adult Atlantic salmon. It gave me a sense of accomplishment, and it also really boosted my self-confidence. It confirmed to me that I belonged to the community of my peers who call themselves scientists. After working as a fishery biologist for over ten years, I had arrived!

4. What advice would you give young women about a career in science?

I have several suggestions. First, I think it’s really important to have a mentor. Someone you trust, who believes in you and your capabilities, and who cares about your future. The path forward isn’t always clear and it’s rarely straight. It’s really helpful to be able to bounce ideas off someone who’s been there before, and be able to get an outside opinion. Second, spend time with other women in your field. It may sound a bit segregationist, but it’s nice to have people in your corner who get where you’re coming from, even if they’re behind the scenes. I’m often the only female in a meeting or on a field crew, and it can be intimidating. Add in a bit of self-doubt and imposter syndrome, and the next thing you know, you aren’t playing your A game. But when you have champions who support you, who you can open up to, and who have confidence in you, it can change your outlook. And last, don’t be afraid of putting yourself out there. Many women I know don’t have the confidence to speak their mind because they’re afraid. Afraid of being ridiculed, or being patronized. But I honestly believe that you need to take risks in order to succeed. So muster up your confidence and go for it!