On March 10, 2016, two Alaska Wildlife Troopers, a public safety technician, and a NOAA Enforcement Officer got underway for a 10-day at-sea operation in the Aleutian chain, Alaska. The joint patrol mission was focused on conducting at-sea boarding's, as

On March 10, 2016, two Alaska Wildlife Troopers, a public safety technician, and a NOAA Enforcement Officer got underway for a 10-day at-sea operation in the Aleutian chain, Alaska. The joint patrol mission was focused on conducting at-sea boarding's, as well as inspections of state and federal commercial fishing vessels and processors operating in the Gulf of Alaska.
What they thought would be a relatively smooth mission, turned into much more than they bargained for.
With days of 40 knot (46 MPH) winds, 10-15 foot seas, and snow, “it was more than I’m used to,” said Enforcement Officer Noah Meisenheimer of the NOAA Office of Law Enforcement Office.
Aboard the State of Alaska’s patrol vessel Stimson, the crew wasn’t in imminent danger. But, on day eight of the nearly 1,300 nautical mile trek, a nearby vessel was. It was a particularly stormy evening when the vessel Stanley K had its anchor wrap around the propeller.
“When we heard that a vessel was without power and couldn’t steer we knew that we had to help,” said Meisenheimer. “That’s how people get lost at sea and we wanted to make sure they didn’t.
“When you hear a call of distress you go and assist. That’s the family of mariners – we all help each other, no matter what.” 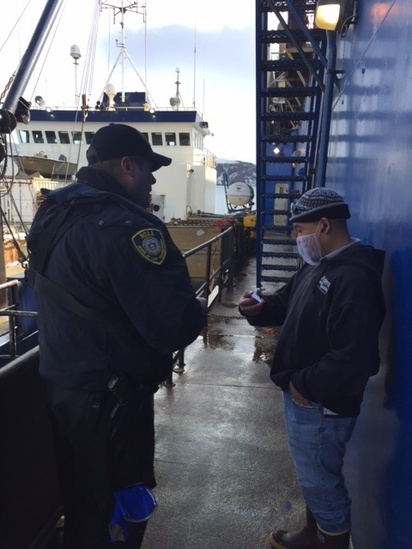 When the Stimson pulled up to the Stanley K, crews hooked a tow line but it broke under the weight of the vessel. Again, the crews attempted a second tow line; this one was successful but after two hours it began to rip off the cleats of the Stanley K.
Unable to pull the disabled vessel, and having attempted numerous approaches to assist over the course of four hours, the Stimson moved into a position to block the raging sea. This barrier allowed for the skipper, a certified diver, of the Stanley K to dive into the water to free the propeller and recover the anchor.
“There was a lot of pot gear floating in the water, so that could have disabled us. But, we kept a close eye on the crew, lines, and debris,” said Meisenheimer about the Stimson. “Everything worked out successfully; the skipper came back up without any issues and everyone went on their merry way.”
By the end of the at-sea patrol, the Stimson team had successfully conducted this rescue mission, inspected more than 100 cod pots, boarded for examination 35 commercial vessels, and audited four seafood processors. In total, eight federal and 13 state violations were documented. These infractions ranged from fishing for Pollock in a closed area and overlimit retention of Pollock to Observer sampling interference, unattended wheelhouse, and unlicensed crew members.
After 10-days on the water, the Stimson dropped off Meisenheimer at Sand Point, Alaska, for a three-day local foot patrol of the remote area.
“Building relations with our partners and managers out on the water and in remote locations makes these types of patrols stand out,” said Meisenheimer. “The long extended patrol a lot of fun; living on the base of operation and being able to move to a much wider area to patrol was an amazing experience and demonstrated the breadth of capabilities joint missions have.”
Collectively through the 13-day trip, he made contact with more than 220 people, including four deployed federal observers.
Asked what the best part of the operation was, Meisenheimer said, “The comradery. Being together with people I haven’t worked with before, but have the ability to know what needs to get done and do it.
“With the professionalism of the crew and Troopers I never felt like I was in an unsafe situation; I always knew someone was going to back me up. But, on this trip, everyone – even the skippers or vessels with violations – were great contacts.
Will Ellis, assistant director for OLE-Alaska, added, “The ability to work together jointly with our state partners for the enforcement of both state, and federal regulations was a success. Through the utilization of the Stimson’s satellite phone and internet capability, OLE was able to maintain communications with land based assets enabling us to get updated vessel locations, movement, and intelligence. These relationships are truly invaluable to OLE.”