On Earth Day, April 22, 2019, we will celebrate the completion of the Town Brook restoration in Plymouth, Massachusetts. 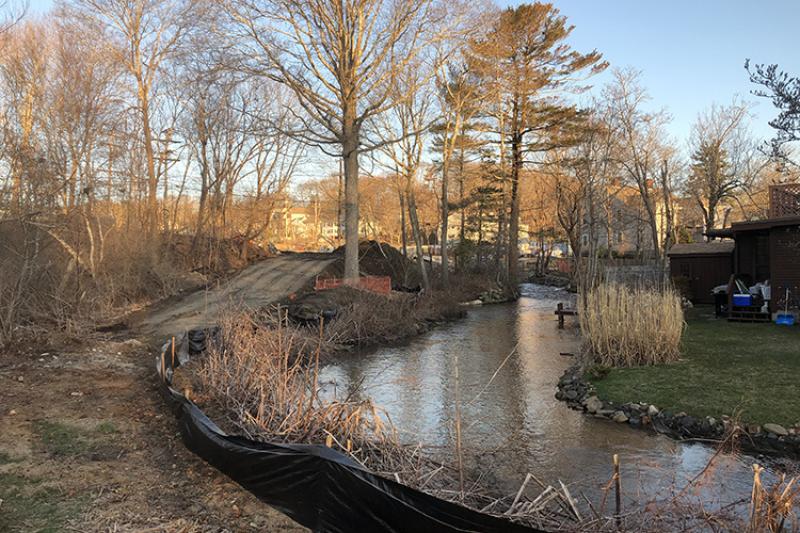 On April 22, Earth Day, we will celebrate the hard work of many dedicated people that were involved with the restoration of Town Brook in Plymouth, Massachusetts. With the herring run re-opened, the potential exists for up to a half million fish to make that annual migration in the near future. 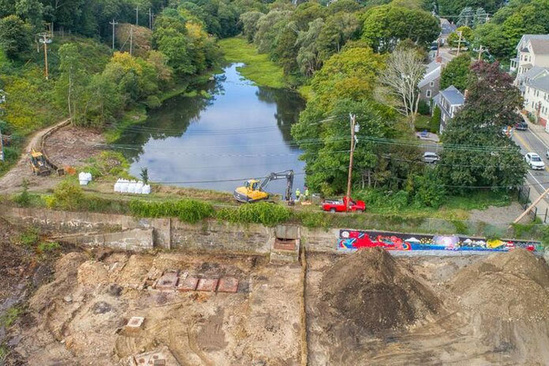 The Holmes Dam in Plymouth, MA prior to its demolition in September 2019.

"These fish are important not only to Town Brook and the Town of Plymouth, but to the much broader marine ecosystem of the Northwest Atlantic," says Michael Pentony, regional administrator for NOAA Fisheries Greater Atlantic Region. "River herring are forage for sea birds, marine mammals, and fish such as cod, tuna, and striped bass. These small silver fish are part of the backbone of the recreational and commercial fisheries of this region, and they support a robust ecotourism industry as well."

This past September, the final major step in the nearly 16-year project to restore Plymouth’s historic Town Brook began: the removal of the Holmes Dam. The project started in 2002, with the removal of the Billington Street Dam. Since then, new improved fishways were added to the Jenney Grist Mill and Newfield Street dams, the Water Street Dam was lowered by 12 inches (2004) and rock ramp constructed (2013), the Off-Billington Street Dam was removed (2013), and the Plymco Dam was removed (2014-15). 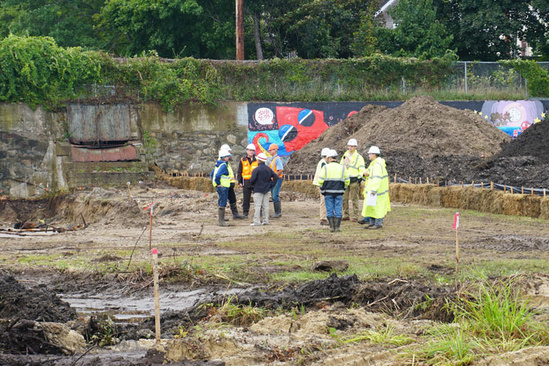 And now, the Holmes Dam is coming down, in time to complete just about the entire habitat restoration project by 2020, the 400th anniversary of the landing of the Pilgrims in Plymouth.

How It All Began

The Mashpee Wampanoag Tribe, also known as the People of the First Light, have inhabited present day Massachusetts and Eastern Rhode Island for more than 12,000 years. They farmed and fished this area, relying on the stream of silver fish returning in the spring to mark the start of the new year.

Then, nearly 400 years ago, the Mayflower came ashore near Plymouth Rock, a large boulder tucked deep into western shore of Cape Cod Bay. The protection offered by this harbor must have been attractive to the Pilgrims in mid-December of 1620. Graced with the “sweet water” of Town Brook, the Pilgrims chose this site to establish the first European colony in Massachusetts. What followed was a brutal winter, and the death of more than half of the original Pilgrims.

Silver Fish Were Key to Survival

The silver fish flowing up the little brook as river herring returned to spawn in the spring must have seemed a blessing to the surviving colonists. With the help of local knowledge shared by a native interpreter, the herring provided a rich source of fat and protein for the colonists. They also learned to use the herring as fertilizer for crops of corn and other produce. Months later, in a meal of thanksgiving for the harvest, eels migrating to the sea supplemented the crops and wild game on the first Thanksgiving table, and likely supplied the Pilgrims with dried and smoked fish for the winter. Without Town Brook, and its runs of diadromous fish, Plymouth Colony might not have succeeded. 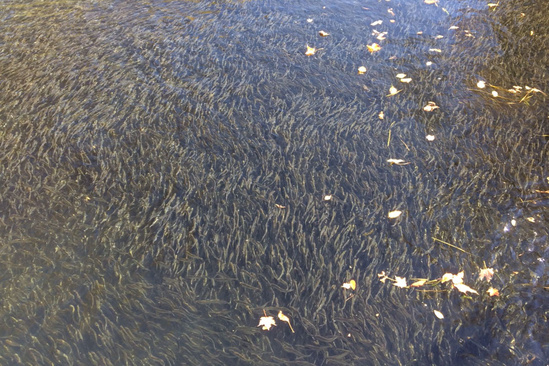 Experts estimate that this run could support upwards of half a million river herring.

Today, as they did 400 years ago, river herring play a key role in riverine and oceanic ecosystems. River herring are sometimes called “forage fish,” as they provide food for predators, such as striped bass, bluefin tuna, bluefish, and Atlantic cod, that support valuable recreational and commercial fisheries. Whales, dolphins, seals, and all kinds of waterfowl also rely on these little silver fish for sustenance.

Now, it’s our turn to help the river herring. Throughout their range, which extends from Florida to Canadian Maritime Provinces, river herring populations have declined. One of the causes is lack of access to quality spawning habitat. Since the Pilgrims landed nearly 400 years ago, we have built thousands of dams on rivers throughout Massachusetts, including about 3,000 that are now obsolete and are no longer serving their original functions. Depending on the effectiveness of efforts to improve fish passage over the years, many of these dams have prevented or limited access to spawning habitat

Getting By with a Little Help from Their Friends 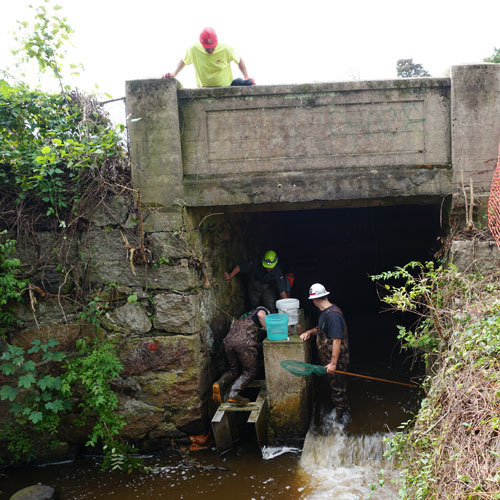 NOAA Fisheries and Town of Plymouth staff donned waders and headed into the underground river looking for fish and turtles to be evacuated before dam removal began.

By the early 2000s,the 1.5 mile stream was blocked by six dams and barriers, reducing herring runs from an estimated capacity of nearly one million fish to just 150,000. Further declines would have occurred without the aid of Massachusetts Division of Marine Fisheries staff. For years, staff and volunteers carefully scooped thousands of herring out of the river, and trucked the fish around multiple Town Brook dams to get them to their spawning habitat.

With the removal of the four dams, improvements to two fish ladders, and the lowering of one dam, experts estimate that this run could support upwards of half a million river herring. River herring in this restored run are now able to swim unassisted to an additional 269 acres of spawning habitat in the Town Brook watershed. 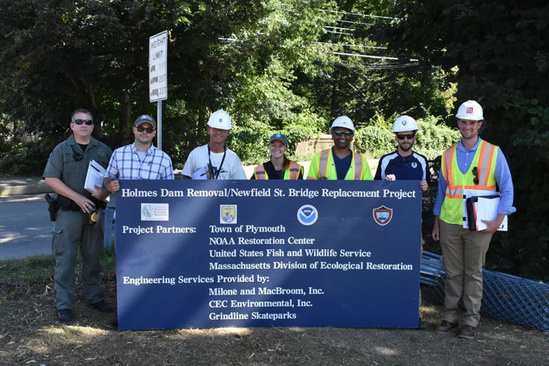 Thanks to Our Many Partners