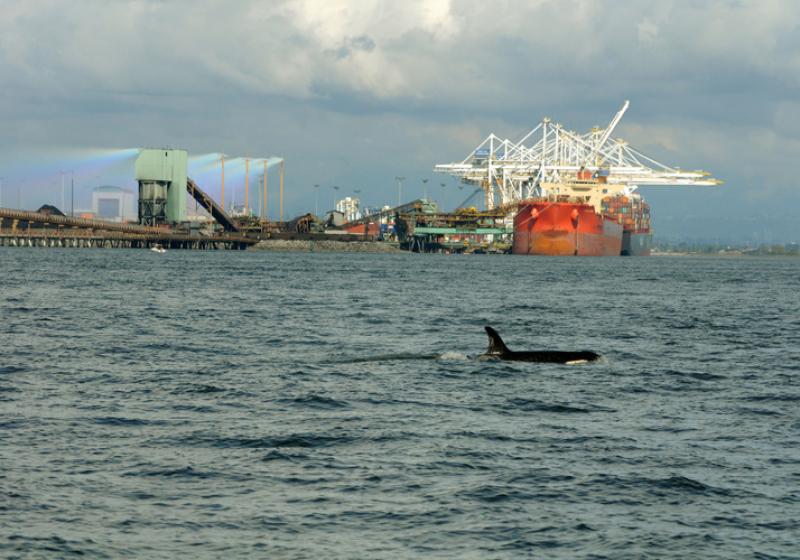 Majestic. Enchanting. Spectacular. We often use these and similar terms to describe killer whales, one of the most recognizable predator species in the world. Here in the Pacific Northwest, whale watchers thrill to catch sight of our very own local population. Known as Southern Residents and grouped into three matriarchal pods, the approximately 80 whales make Puget Sound and its surrounding waters their annual summer home.

The Southern Resident population has been listed as endangered since 2005, and in 2015 were designated one of NOAA’s Species in the Spotlight based on their high risk of extinction. In Seattle, scientists from NOAA Fisheries’ West Coast Region and Northwest Fisheries Science Center are studying the factors that put the whales at risk. Their efforts are guided by the Final Recovery Plan for Southern Resident killer whales and a recent 5-year action plan.

So why are the whales at risk? According to the Species in the Spotlight report, the three main threats are “insufficient prey, high levels of contaminants…, and impacts from vessels and sound.” Teresa Mongillo, a fishery biologist at the West Coast Region, is the lead author of a new NOAA Technical Memorandum that aims to shed light on the second of these factors: a group of toxic chemicals called persistent organic pollutants (POPs).

Her team’s report analyzes some of the most common POPs found in and around Puget Sound, including the polybrominated diphenyl ethers (PBDEs) in flame retardants and the long-lasting PCBs and DDTs that still exist in the environment. It also examines how these chemicals are transferred, both from the whales’ favored prey (Chinook salmon) and between mothers and calves.

Southern Residents, it turns out, are picky eaters. While they will eat a variety of prey, including sole, cod, herring, and squid, their preferred diet is Chinook salmon. They even appear to select the oldest, largest Chinooks, when they are available. Unfortunately, this sweet tooth for salmon may be hurting them in the long run.

Ocean-type Chinook prefer coastal waters, meaning they spend most of their lives relatively close to shore, or in protected inland marine waters like Puget Sound. This may expose them to industrial discharge, urban drainage, wastewater from treatment plants, and agricultural runoff—all sources of harmful chemical contaminants.

“Chinook salmon are predators: they eat other fish, which puts them higher up the food chain than some other fish species,” Mongillo explained. “So they collect and store these chemicals throughout their lives. This is one reason why Southern Residents are more polluted than other killer whale subgroups: they eat prey that are highly polluted themselves.”

In a process known as biomagnification, POPs become more concentrated as they move up the food chain. Killer whales, being top-level predators, accumulate more of these harmful chemicals than other animals in the ocean. Scientists are still learning the full extent of what this is doing to the Southern Residents’ health.

At the very least, carrying a cocktail of toxic chemicals around in their fat reserves probably isn’t good for them. Among the known potential effects of various POPs are endocrine disorders, reproductive dysfunction, a compromised immune system, neurological problems, unusual behavior, and cancer. And that’s just in adults.

POPs can affect fetuses and nursing calves, as well. A killer whale mother’s milk is partially produced from her blubber. When nursing, she transfers a percentage of her load of POPs to her offspring, potentially causing changes in their metabolism, growth rates, and future fertility. POPs can even slow learning and impair memory, challenging a young whale’s ability to forage for food and interact with others in its pod.

“We’re concerned about the calves,” said Mongillo, “who are at the developmental age where they’re very susceptible to these health effects, especially in response to PCBs and PBDEs.”

So what can we do to help the whales? For Southern Residents, at least, recovery may require more than just making sure they have more fish to eat. We also need to minimize the amounts of toxic chemicals we put into their environment.

Alicia Keefe is the Education and Outreach Coordinator for NOAA Fisheries’ West Coast Region. She has created a useful set of guidelines for anyone interested in doing more to keep our local waters clean. They include:

For the complete list, or for more information about what you can do to help Southern Residents, you can contact Alicia directly at alicia.keefe@noaa.gov, or by calling (206) 526-4447. She also recommends Puget Sound Starts Here, a public awareness campaign with hundreds of local members, and the Seattle Aquarium’s killer whale web page.

For more about killer whale conservation in the Pacific Northwest, the West Coast Region’s killer whale web page provides numerous useful links, including to some hazards not covered in the Technical Memorandum described above (like ship strikes and ocean acoustics). Or visit this page focusing on recovery of Southern Residents, with details about NOAA Fisheries’ partnership with the EPA to help combat toxic pollutants in our waters.

To learn more about the threat POPs pose to Southern Residents, read Exposure to a Mixture of Toxic Chemicals: Implications for the Health of Endangered Southern Resident Killer Whales. (PDF, 118 pages). In addition to its thorough discussion of the effects of POPs on marine mammals, the Technical Memorandum provides a detailed set of recommendations for the most necessary directions that future work on Southern Residents should take.