Annual projections on when adult Chinook salmon are expected to return to the Yukon River to spawn. 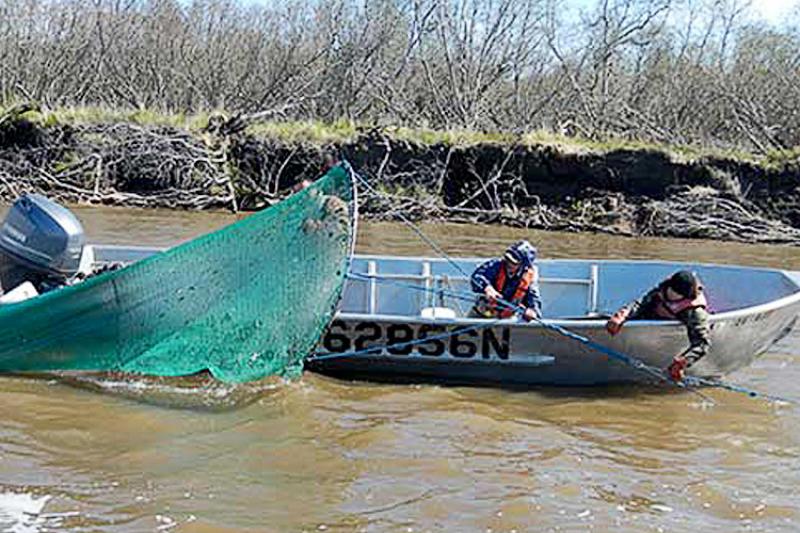 Each year NOAA Fisheries and its partners at Alaska Fish and Game and Alaska Ocean Observing System share annual projections on when adult Chinook salmon are expected to return to the Yukon River to spawn.  Another team of NOAA Fisheries scientists is also engaged in a second year of study examining the health of young salmon as they leave the river and venture into the ocean for the first time.

“To gauge the health of a salmon population, we need to monitor migrations of both adults and juveniles and look at the environmental factors that may affect them as they migrate,” said Phil Mundy, laboratory director, for Auke Bay Laboratories, part of the NOAA Fisheries’ Alaska Fisheries Science Center. “Monitoring juveniles in their first summer as they move from the river to start life in the ocean is essential to understand how many of them may survive to return as adults.”

Scientists have long been tracking adult Chinook salmon migrations into the Yukon River, which is the third largest river in the United States in terms of water flow. However, until the current research was initiated very little information had been gathered on the juvenile Chinook salmon migrating out of the river to the sea. The last research to be conducted on juvenile salmon in the lower Yukon River occurred in 1986.  At that time, the number of returning adults was much higher than it is today.  In this current work, researchers hope to better understand, among other things, how survival rates of young fish could factor into the lower adult returns of recent years.

The big questions scientists are seeking to answer include:

“We know that healthier fish have a better chance of surviving to adulthood,” said NOAA Fisheries Research Biologist Katherine Miller with the Alaska Fisheries Science Center’s Auke Bay Laboratory. “So, we will be working with local fishermen to catch, count and collect a sample of young fish from various points in the river. Scientists back in our lab will then examine the stomach contents of collected fish to help answer our research questions.”

Researchers also will be sampling fish at the edge of the Yukon River delta, where fresh water and salt water meet.  It is also the place where young fish first reach the ocean. The freshwater flow from the Yukon River extends up to 10 miles offshore of the Yukon Delta and can be seen by satellites from space.  Sampling will occur during June, July and August.

This research is a collaboration between NOAA, the Alaska Department of Fish and Game, and the Yukon Delta Fisheries Development Association.  Funds are also provided by the Arctic-Yukon-Kuskokwim Sustainable Salmon Initiative and the North Pacific Research Board.