A study of the diets, health, and seasonal cycles of juvenile Chinook salmon on the Yukon River Delta. 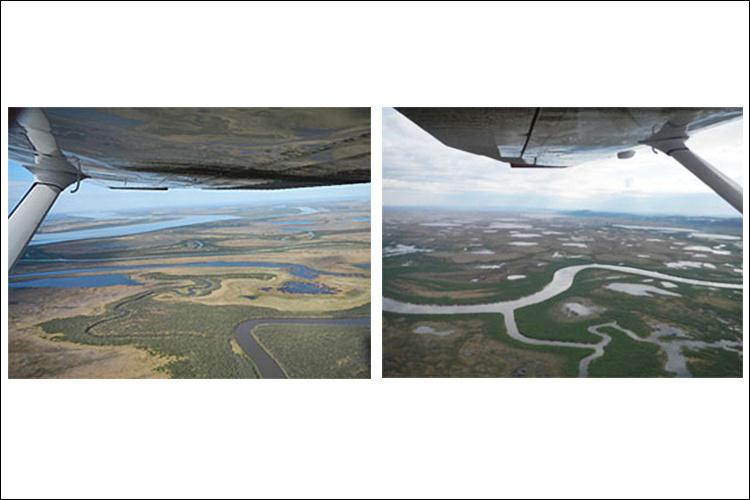 Scientists from the National Oceanic and Atmospheric Administration (NOAA) and the Alaska Department of Fish and Game partnered with the Yukon Delta Fisheries Development Association to study the diets, health, and seasonal cycles of juvenile Chinook salmon on the Yukon River Delta beginning in summer 2014.  Katharine Miller, a Research Fisheries Biologist with the AFSC's Recruitment Energetics and Coastal Assessment program, reports on her second year of field work. Her work focuses primarily on estuarine ecosystems.

My first view of the Yukon Delta from a small prop-plane was inspirational.  Nothing I had read or seen in pictures had prepared me for how vast and complex the Yukon Delta really is.  Looking down on it from above, it is an intricate landscape of ponds, sloughs, small water courses and larger river channels.  A very challenging environment in which to try to catch salmon that are less than 4 inches long!  But that was our task: to collect juvenile Chinook salmon so we can study them as they make their journey from their freshwater Yukon home to the sea.

The Yukon River is over 3,000 miles long.  It originates in British Columbia, Canada and ends in the cold waters of the Bering Sea off Alaska.  Every year, adult Chinook, coho and chum salmon return from the sea and make their way up the Yukon tributaries to the spawning grounds.  For the Chinook salmon, which spawn close to the headwaters, this annual journey is one of the longest fish migrations in the world.

In order to make such a long journey, the salmon need to store up fat reserves at sea before entering the river.  These fat reserves, which can account for up to 30 percent of the fish’s muscle weight, give Yukon Chinook salmon their distinctive flavor.  With returns once numbering around 300,000 fish per year, these fatty fish were once the mainstay of subsistence communities and commercial fisheries all along the river.  However, things have changed and far fewer fish are returning to the Yukon River to spawn.  In 2012, the U.S. Department of Commerce issued a disaster declaration for Chinook salmon fisheries on the Yukon and Kuskokwim rivers, and there have been closures and restrictions on commercial and subsistence fisheries in the last few years.

After hatching from the spawning beds or redds, juvenile Chinook salmon spend up to 2 years living and feeding in the river and its streams before beginning their migration out to sea.  The transition between freshwater and marine environments is a crucial period in which predation and growth strongly affect winter marine survival and the ability to grow to adulthood and return to the river to spawn – a process known as recruitment.   There are many factors that could be influencing the decline in salmon returns.  One factor might be a mismatch between the timing of the juvenile fish outmigration with the availability of food.  This is one of the hypotheses that our research is investigating.

Satellite image from February 5, 2015 of the frozen Yukon River and adjacent sea ice (left) and a March 5, 2015 image of the ice-free river (right) (NASA Worldview)

During winter, the Yukon River is frozen, and ice also covers much of Norton Sound off the Yukon Delta.  Open areas of marine water, called leads, occur as the ice breaks up.  The average date for the ice to leave the lower Yukon River in the vicinity of the village of Alakanuk is May 23, but in 2014 during the first year of this study, the ice was gone by May 5th! This year, the ice left on May 19th.  Even after the ice is out of the river, ice can linger for a while along the shore and in Norton Sound. 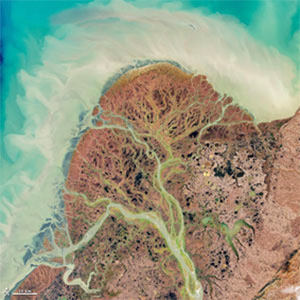 Image of the Yukon River from space showing the large, muddy plume of freshwater extending into the sea (NASA Earth Observatory)

We cannot effectively sample under the ice, especially when it is starting to move, so our research in 2014 and 2015 begins in May just after the ice is gone.  Most of the Alaska portion of the Yukon River flows through the Yukon-Kuskokwim Delta: a large alluvial plain of sediment that has been deposited by the Yukon and Kuskokwim Rivers over long periods of time.  At its lower end, the Yukon River branches into three main tributaries.  With help from fishermen from the lower Yukon villages of Emmonak and Alakanuk, we have set up sampling stations on each of the tributaries to catch fish from May through July.

The second part of our research occurs approximately 10 miles offshore of the Yukon Delta.  The Yukon is the third largest river in the United States in terms of the amount of freshwater flow.  There is so much muddy freshwater flowing out of the river that the river plume can be seen from satellites in space.  At the edge of this freshwater plume, the juvenile salmon will transition from a freshwater fish to a marine fish.  By studying the fish all along their journey to the sea, we can learn about how they grow and change as they prepare for life in the ocean.