Scientists from the National Oceanic and Atmospheric Administration (NOAA) and the Alaska Department of Fish and Game partnered with the Yukon Delta Fisheries Development Association to study the diets, health, and seasonal cycles of juvenile Chinook salmon on the Yukon River Delta beginning in summer 2014. 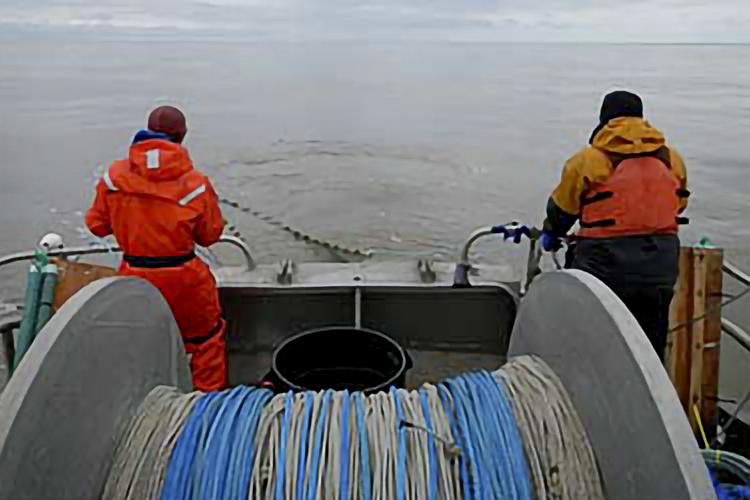 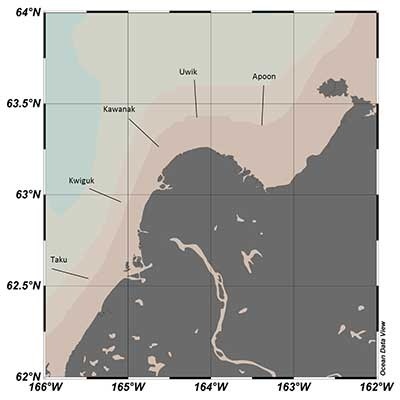 Location of sampling transects around the Yukon Delta.

As the Yukon River water passes the mouths of the tributaries, it spreads out across a subtidal area called the platform.  The platform is large and extremely shallow, averaging less than 2 meters (6 feet) deep and extending as much as 30 kilometers (18 miles) off the river mouths.   Within the platform are a number of channels that have been scoured out by ice and river flow.  Juvenile salmon must cross this platform as they head out to sea, but most of the area is too shallow to sample using trawls, and the water is too turbid to be able to locate the ice-scour channels that the fish may be using on their outmigration.  At its seaward edge, the platform drops off abruptly into deeper water.  Here, with the use of a small charter fishing vessel and some specially designed nets, we can restart our sampling and pick up our story of Yukon salmon migration.

To sample off the Delta platform, in the area known as the delta front or pro-delta, we fly across Norton Sound to Nome, Alaska.  Here we board the 42’ charter fishing vessel Anchor Point to make the journey back to our sampling stations.  We have established five transects, each with three sampling stations, around the perimeter of the Yukon Delta.

Depending on whether we start at Apoon on the north of the delta in Norton Sound, or Taku off South Mouth, the journey by boat back to the Delta takes between 8 and 12 hours.   There is approximately 8 miles between each station, and 25 miles between each transect.  All of this adds up to a lot of time spent just getting to where we can put the nets in the water! 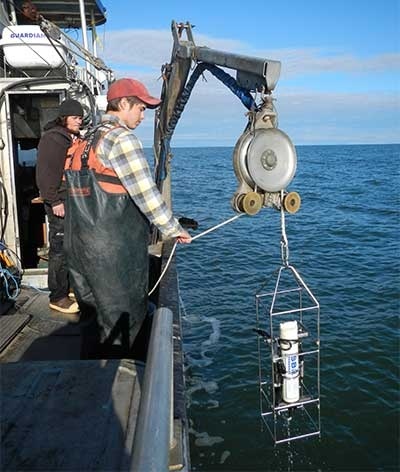 A CTD is used to collect information on the water column's temperature, salinity and turbidity. Photo by Darcie Neff.

We also collect data on the water that we are fishing in using a CTD (Conductivity-Temperature-Depth) instrument.  Conductivity is a way of measuring salinity.  The instrument takes measurements every 0.5 seconds as we lower it over the side of the boat.  After processing the information in a computer program, we can see vertical profiles of the water that shows how the temperature, salinity, and turbidity of the water varies as we move from shallow stations to deeper stations, as we move around the delta, and as we sample over the summer.

For example, in June, the entire water column in the shallow stations is very fresh and warm, as a result of the incoming freshwater from the river.  The freshwater continues to be present in the deeper stations, but it becomes narrower and narrower until is it is a freshwater band floating on the denser, saltier marine water below.  Knowing whether the juvenile salmon are staying in this freshwater band or venturing into the salty marine waters is an important clue in understanding how they are transitioning from one environment to the other.