NOAA joins forces with the Whale and Dolphin Conservation team to expand the Greater Atlantic Regional Marine Mammal Stranding Network. The Network assesses health, provides rehabilitation, and investigates the cause of death of marine mammals. 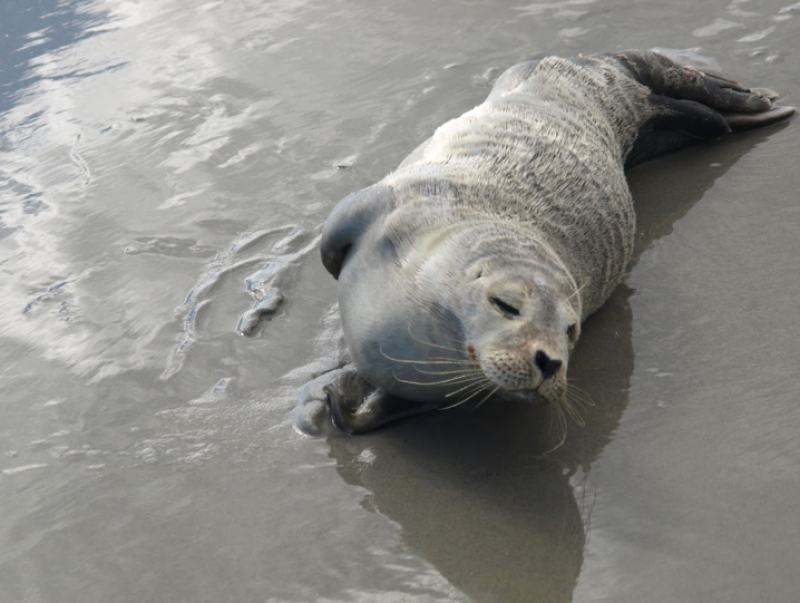 A harbor seal pup is assessed for body condition and signs of injury. Credit: WDC

We have good news for any whales, dolphins, seals, and porpoises in trouble from Marshfield to Plymouth, Massachusetts: there’s a new stranding response team in town! This newly formed team from Whale and Dolphin Conservation (WDC) brings a wealth of experience and expertise in marine mammal stranding response. NOAA is very excited to welcome them to the Greater Atlantic Regional Marine Mammal Stranding Network.

NOAA oversees the Marine Mammal Health and Stranding Response Program. It authorizes the Network to assess the health of live animals and provide triage or rehabilitation when necessary. The Network also investigates the cause of death of marine mammals, such as during unusual mortality events of humpback, minke, and North Atlantic right whales.

WDC is now authorized to respond to live and dead stranded seals, dolphins, porpoises, and whales. The team, led by Executive Director Regina Asmutis-Silvia, and Stranding Coordinator Sarah McCormack, has hit the ground running. In their first month, they have already responded to several stranding events, including a live, stranded dolphin and two seals who had wounds from recent interactions with sharks.

During a response, the team collects extensive data and samples for diagnostics, research, and education. “Marine mammals play an integral role in our ecosystem, the health of our planet, and our own future. By collecting information from stranded animals, we continue to learn about these important species,” said Asmutis-Silvia.

“WDC’s response range is an active habitat for harbor seal pups, as well as a common area for dead whales to strand. We are thrilled to have their support for stranding events,” said Ainsley Smith, NOAA’s Greater Atlantic Regional Marine Mammal Stranding Coordinator. “The team brings passion and years of experience in marine mammal conservation to the Network with the establishment of their stranding response program.”

While this is a new agreement, the staff are well versed in marine mammal biology and stranding response. Asmutis-Silvia’s background is in biology and she was a long-time stranding responder for the original Cape Cod Stranding Network. McCormack has worked at the Virginia Aquarium and Marine Science Center, the International Fund for Animal Welfare, and California Wildlife Center. While on these teams, she acquired experience with marine mammal response, rehabilitation, and necropsy (animal autopsy).

In the past, WDC staff volunteered as stranding responders under the New England Aquarium, which previously covered the Marshfield to Plymouth area. The Aquarium began shifting its mission towards endangered sea turtle recovery in 2019 and NOAA began seeking an organization to take the lead on marine mammal stranding response in this area. McCormack states, “We are excited to fill a critical gap along the Massachusetts coastline in the Greater Atlantic Region Marine Mammal Stranding Network. We’re looking forward to contributing to the conservation of marine mammals through stranding responses, while promoting the ecological importance of these animals through community outreach.”

What should you do if you see a stranded, distressed, or dead marine mammal?

If you are in the area of Marshfield through Plymouth, call WDC’s Marine Animal Rescue & Response Hotline at (617) 688-6872. For other locations from Maine through Virginia, local stranding network partners can be contacted through NOAA’s stranding hotline: (866)755-6622.