What’s Behind Chinook and Chum Salmon Declines in Alaska?

NOAA science provides insights on poor salmon runs on Yukon and Kuskokwim rivers in 2020 and 2021. 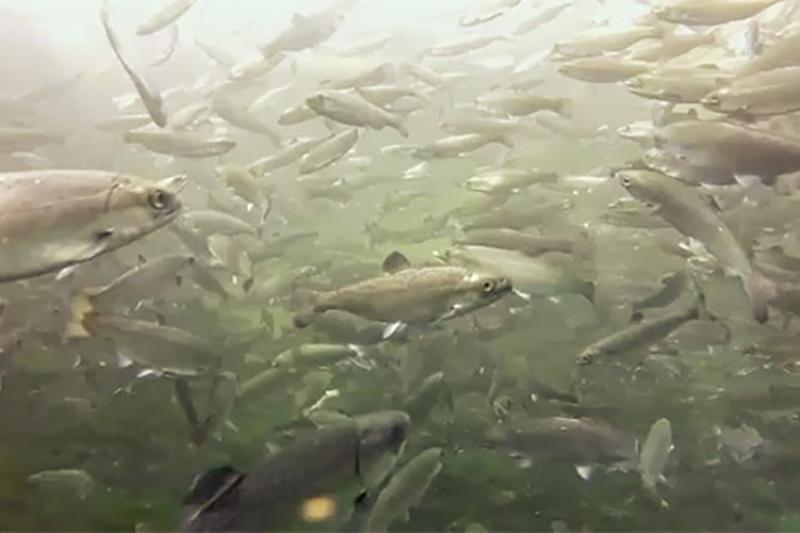 The decline in salmon runs in the Yukon and Kuskokwim river systems over the past few years has caused a tremendous hardship for commercial and recreational fisheries and subsistence communities. Chinook and chum salmon harvests are part of the cultural fabric of subsistence communities and serve as a critical food source. We are working with communities and state and federal partners to provide needed science and management to respond to this complex challenge.

Our science indicates that several factors working in combination due to warm water temperatures likely contributed to poor Yukon and Kuskokwim River returns in the past 2 years.

Poor Diet and Changes in Metabolism in Young Salmon

Our collaborative marine ecosystem surveys with the Alaska Department of Fish and Game and supporting laboratory studies help us gain critical insights on:

In the northern Bering Sea, we have been conducting a survey of juvenile Chinook and chum salmon (1–3 years old) for more than two decades. We have observed a steady decline in abundance of Chinook salmon juveniles, but the abundance of juvenile chum has increased in recent years.

For Chinook there is a pretty good relationship between the number of juveniles we see in our survey and the number of adults that return to spawn to the Yukon River in future years.

For chum the story is a little more complicated. Just because we have been seeing higher numbers of juveniles in our recent survey doesn't necessarily mean we will see more adults in the rivers in the next few years. Environmental conditions in the different places that chum go to feed in the ocean may have something to do with this. We also suspect this is the key reason that 2020 and 2021 adult chum returns to the Yukon River were so low.

To understand what happened to returning adult chum in 2020 and 2021, looking at conditions that young fish experienced in the ocean during the warm years of 2016 and 2019 provides some insight.

In the warm years of 2016 and 2019, we observed thinner, less fit young chum salmon in our survey. We suspect this was due to a combination of increased metabolic rates, reduced prey, and poor prey quality.  At the same time, there were also mass seabird die offs, and a gray whale unusual mortality event. Poor prey availability was identified as a potential factor in both of these situations.

By compiling juvenile abundance estimates over the years, we learned that much of the year-to-year variability in survival of Yukon River Chinook salmon occurs during the first few years of life (freshwater and initial marine stages). However, the recent decline in Yukon River chum salmon has occurred during their later marine stages.

These young chum salmon migrate into the Gulf of Alaska in the winter to feed. Scientists suspect that during the warm years, the chum experienced a double whammy. First, there was reduced prey availability and lower quality prey in their Bering Sea feeding grounds. Then they encountered a similar situation when they entered the Gulf of Alaska as older fish. This likely contributed to the lower salmon returns in recent years to the Yukon River.

Surveys like the 2020 and 2021 International Year of the Salmon may provide important insights on conditions in the Gulf of Alaska winter feeding grounds for chum.  This may help us better predict adult chum returns so that subsistence communities and fishermen can better prepare.

The Alaska Department of Fish and Game has also seen an increase in Ichthyophonus infection (a parasite) in salmon returning to the lower Yukon, predominantly in Chinook. In 2021, Chinook returning to the Yukon to spawn were smaller than average—44 percent of the fish sampled were infected with Ichthyophonus. This was significantly higher than previous years of sampling.

What Role Did Bycatch Play in the Declines?

Through our genetics research, we are learning a lot about how bycatch affects Alaska salmon runs. This is because we are able to identify what proportion of the salmon bycatch in the pollock fishery comes from Alaska rivers.

Over the years, most of the chum salmon caught as bycatch in commercial groundfish trawl fisheries in the eastern Bering Sea are either hatchery fish from Asia or fish from the Eastern Gulf of Alaska/Pacific Northwest (southern stocks including Southeast Alaska, British Columbia and the lower 48).  Considerably fewer chum salmon are from western Alaska.

For example, in 2021, of the 545,883 total chum salmon taken as bycatch, 67.6 percent (368,892) of these fish were from Asia. Around 9.4 percent (51,510 fish) were from western Alaska, which includes the Yukon, Kuskokwim, and Nushagak rivers and areas in Norton Sound and north. Because of natural mortality at sea, not all of those western Alaska salmon would have returned to their natal rivers to spawn or been available to in river fisheries.

For Chinook salmon in 2020, 18,195 of the 32,294 Chinook caught in the Bering Sea and Aleutian Islands groundfish fisheries were from western Alaska stocks. This represents 56.4 percent of the total bycatch (Incomplete data are available for 2021). Again, not all of these fish would have survived to return due to natural mortality in the ocean.

We have fine-scale data on river run size and age composition for Chinook salmon. We can use these data in sophisticated statistical models to estimate the number of Chinook salmon that would have returned to their natal rivers after accounting for marine mortality. This allows us to quantify the direct impact bycatch has on Chinook salmon runs.

This impact rate is the number of Chinook salmon caught as bycatch that we calculate would have returned to spawn divided by the total run sizes to a given area.

In 2020, the impact rate to the western Alaska stock group was estimated as 3.4 percent and the impact rate to the upper Yukon was estimated as 0.94 percent. This means that bycatch accounted for less than 3 percent of the total runs to each of these systems in 2020. These percentages corresponded to an estimated 10,337 Chinook salmon from western Alaska and 871 Chinook from the Middle and Upper Yukon that were captured as bycatch that we estimated would have returned.

While evidence indicates that the 2020 and 2021 run declines were due largely to climate-related changes in the marine environment, we still need to do more to address bycatch, especially given historic low salmon runs. Scientists at the Alaska Fisheries Science Center are engaged in a number of research efforts to provide important information to help resource managers understand and mitigate this issue.

NOAA Fisheries scientists are working with the fishing industry to develop new tools to reduce salmon bycatch. With the help of genetics we are also helping fishermen explore new ways to fish so they can do more to avoid catching these species.

We are also providing more timely information to help resource managers so they can be more responsive in their management actions.

The Alaska Fisheries Science Center’s Genetics Program is exploring ways to help the fishing industry avoid catching specific stocks of salmon through integrative analyses that combine large datasets to predict stock specific distributions. Additionally, the genetics lab has decreased the analysis time for chum salmon by nearly a year and will do the same for Chinook salmon. This will ensure these important data are made available sooner.

NOAA Fisheries’ social scientists, participating in our ACLIM and GOACLIM efforts, have initiated programs in the Bering Sea and the Gulf of Alaska. We want to learn more about scientific and traditional observations of the impacts of climate change on salmon and other local subsistence and commercial fisheries. By understanding how changes in returns are impacting communities, and if and how people are adapting to these changes, scientists can develop indicators to project climate change impacts on fish stocks and communities. This information will help NOAA Fisheries further understand the effect of federal fisheries on salmon returns and minimize the social and economic impacts on communities.

Over the years, the North Pacific Fishery Management Council has developed a number of federal management measures to help reduce salmon bycatch, which NOAA Fisheries has implemented.

These efforts must comply with requirements under the Magnuson-Stevens Act to minimize bycatch to the extent practicable while balancing various user needs.  We have to make progress in reducing bycatch while accounting for the economic contribution from the pollock fishery.

The pollock fishery, through tax revenues, supports important community services (e.g., education, police, snow plowing etc.). Community Development Quota programs in western Alaska have also invested in these fisheries. These programs provide significant support to local communities through jobs, scholarships and heating fuel support. Reductions in bycatch must be balanced against the reality of other impacts.

Some efforts to date

In 2010, NOAA Fisheries implemented revisions to the federal fishery management plan for the groundfish of the Bering Sea and Aleutian Islands Management Area (Amendment 91). Incentive Plan Agreements were developed to help reduce salmon incidental catch at all levels of pollock and salmon abundance. A key component of these Agreements with the commercial fishing industry is the use of near real-time data to inform incidental catch “hot-spot” closures. Through these closures, vessels are prohibited from fishing in areas of known high salmon abundance as they change throughout the season.

This year, the Secretary of Commerce directed $55,928,849 million in disaster relief to Alaska Norton Sound, Yukon, Kuskokwim, Chignik, Prince William Sound, and Southeast Alaska Salmon Fisheries. This effort will mitigate some of the loss of critical salmon runs due to climate change and associated impacts on commercial and subsistence communities in Alaska.

Salmon are an important component of Alaska marine ecosystems and vital to coastal communities.

We are committed to doing more to help tackle the many issues affecting salmon survival in Alaska through science and management.