We conduct a variety of genetic research on Pacific salmon, groundfish, and forage fish species to comply with regional, national, and international agreements and treaties for managing marine resources. 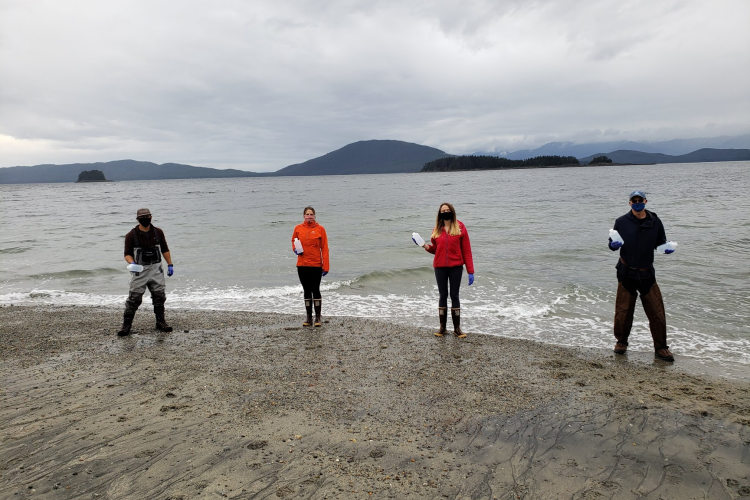 Our primary goal is using genetic tools to inform conservation and management of natural resources with an emphasis on fish species managed by the Alaska Fisheries Science Center. The species we study include Chinook salmon, chum salmon, sockeye salmon, sablefish, Pacific cod, Alaskan pollock, various rockfish, and sleeper sharks. We also use molecular tools to conduct species identification, estimate species diversity, and investigate diet patterns from stomach or fecal samples. Information on some of our current projects is below.

Understanding the stock compositions of salmon caught as bycatch in large groundfish fisheries is important for informing stock-specific management. Our laboratory analyzes samples collected by fisheries observers and uses genetic baselines of spawning stocks to assign samples back to their stock of origin. We then share our results with resource managers at the North Pacific Fishery Management Council to help make management decisions. The laboratory is transitioning to a genomics (genotyping-by-sequencing) approach for genotyping that will greatly improve efficiency.

The AFSC has been analyzing bycatch samples for over a decade and is currently working on new analysis methods that incorporate artificial intelligence to understand stock-specific distribution patterns. Preliminary results from these analyses indicate that there are some consistent patterns in stock compositions across seasons and years but run sizes and environmental conditions significantly influence stock compositions within a given year. We are continuing to synthesize the large amount of data we have generated to better understand stock-specific distributions and ecology. This research will ultimately help fisherman avoid important salmon stocks and will provide useful information on salmon ecology including stock-specific migration and distribution patterns.

Pacific cod support large fisheries in the North Pacific Ocean and Bering Sea which are managed by the AFSC. It is important to understand the stock structure of this species to ensure that stock assessments and catch quotas reflect demographically independent units. The AFSC genetics group has conducted genetic research on the stock structure of Pacific cod for over a decade. Most recently, we used a genomic tool called RAD sequencing to genotype thousands of genetics markers in Pacific cod, greatly improving resolution to detect stock structure. We found multiple isolated populations, with high differentiation between areas such as Prince William Sound, the Aleutian Islands, and Kodiak. We also analyzed cod colonizing new habitats in the northern Bering Sea and found that they were likely fish belonging to other Bering Sea/Aleutian Islands stocks. We are currently employing genome resequencing to further improve resolution of stock structure and investigate local adaptation. Preliminary results have revealed striking signatures of adaptive divergence among populations and we plan to investigate these further to understand how these genomic regions influence cod phenotypes. Our ultimate goal is to understand stock structure at both neutral and adaptively important genetic markers to predict how cod may be able to respond to rapidly changing conditions.

Understanding how species are distributed across space and time is vital for developing conservation strategies to protect these species. However, collecting data on species distributions is extremely time and resource intensive, requiring infrastructure such as large boats and nets and substantial personnel time. An alternative method that can generate similar data with substantially less effort and infrastructure requirements compared to traditional net sampling is environmental DNA (eDNA). eDNA sampling involves collecting and filtering water to isolate DNA fragments shed from organisms then using molecular methods such as metabarcoding to assess species presence/absence and abundance. We recently employed eDNA analysis to investigate nearshore fish communities across various habitats near Juneau, AK. We found that some species, such as salmon, herring, sculpin, gunnels, and flatfish, were generally ubiquitous across all habitats and tide phases. Additionally, we found that some pelagic and commercially important species such as cod and sablefish were found intermittently but in high abundance when encountered. We are excited about conducting further sampling to characterize the distributions of these commercially important species in the nearshore environment where knowledge of their ecology is lacking. Additionally, we are conducting eDNA sampling in a number of other diverse environments including near deep sea corals and in the Arctic.