Shark is not a word most people associate with Alaska, yet three species are commonly found. 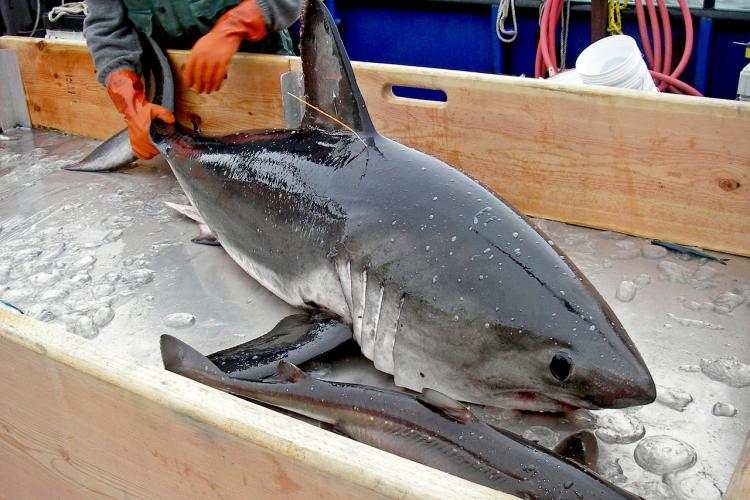 "Shark" is not a word most people associate with Alaska. There are three shark species commonly found in Alaskan waters: Pacific sleeper shark (Somniosus pacificus), spiny dogfish (Squalus suckleyi), and salmon shark (Lamna ditropis). Many other species occur occasionally in Alaskan waters as well, including great white sharks (Carcharodon carcharias), blue sharks (Prionace glauca), six-gill sharks (Hexanchius griseus) and others. Currently there are no directed fisheries for these species in Alaska, but they are caught incidentally in other fisheries.

We calculated vulnerability scores for 21 Alaskan groundfish species based on their reproductive biology and susceptibility to overfishing. Three of the four most vulnerable species were sharks. The Pacific sleeper shark was the most vulnerable of all species considered.

Our scientists collect and analyze the scientific information needed to manage and conserve sharks in Alaskan waters.

We calculated vulnerability scores for 21 Alaskan groundfish species based on their reproductive biology and susceptibility to overfishing. Three of the four most vulnerable species were sharks. The Pacific sleeper shark was the most vulnerable of all species considered.

Our vessel surveys combined with fishery observer catch records provide biological information on shark species in Alaska waters. The sharks are managed as two stock complexes: Bering Sea/Aleutian Islands and Gulf of Alaska. The species within the complexes are: Pacific sleeper shark, spiny dogfish, salmon shark and “other/unidentified” sharks. We summarize and analyze the survey and catch data in annual Stock Assessment and Fishery Evaluation Reports. Both of the assessments are considered data-limited and our scientists are working with experts in the data-limited assessment field to improve the assessments.

Pacific sleeper sharks are the largest of the shark species encountered in Alaskan waters, growing up to 7 meters long, and the biggest mystery. This species is poorly sampled by existing research surveys, possibly due to their large size and/or the surveys not sampling areas where the species inhabits. Thus, estimates of biomass are not available for the stock assessments. This species is the primary species in the shark stock complex in the Bering Sea and Aleutian Islands.

The life history of the Pacific sleeper shark is unknown. Of the animals that do get sampled, none have ever been mature. Parameters such as fecundity, age at maturity and natural mortality are unknown. Reproductive mode is speculated to be aplacental viviparity based on other species in the family. This species has proven very difficult to age, but research on a similar species (Greenland shark, Somniosus microcephalus) suggests that they are long lived. Therefore little is known about their growth, longevity, or reproductive biology to inform the stock assessment.

Our scientists are collaborating with our partners to fill some of these knowledge gaps. We are investigating the population stock structure through next generation genomics and examining alternative methods for age estimation, as well as collaborating with universities and other organizations on investigations of discard mortality and physiology.

Spiny dogfish are the primary shark species in the Gulf of Alaska. They are long-lived and slow growing species, living to 100 years or more and not reaching sexual maturity until 36 years. Reproduction is also slow for this species: gestation takes nearly 2 years, with an average of about 9 pups per pregnancy, and recent studies have suggested that they can skip-spawn, further slowing the reproductive processes.

We have deployed satellite tags on spiny dogfish since 2009 to observe their migration and habitat use. Besides tracking movements, the tags record the temperatures, depths and light levels that the shark experiences. We are developing movement models which incorporate oceanographic conditions to supplement the tag data and estimate movement paths. The habitat use and migration data will inform the Essential Fish Habitat for the species and provide managers information on the interjurisdictional movement of the species.

Salmon sharks are rarely encountered in surveys in federal waters, and occasionally caught in trawl fisheries in the Bering Sea. The species is more commonly caught in Alaska state salmon fisheries and in nearshore waters. The species is also targeted by sport fishermen in Alaska, but catches are low. Tagging studies by the Alaska Fisheries Science Center and collaborators show that some animals may migrate thousands of kilometers south while others may over winter in Alaskan waters.