During March (Women’s History Month), the Northeast Fisheries Science Center asks five women scientists to share a little about their science journey, what hurdles or obstacles they’ve experienced, how they overcame them, and what advice they might have for the next generation of women scientists. Featured this week is Katie Shelledy, a junior acoustician at our James J. Howard Lab in Sandy Hook NJ. 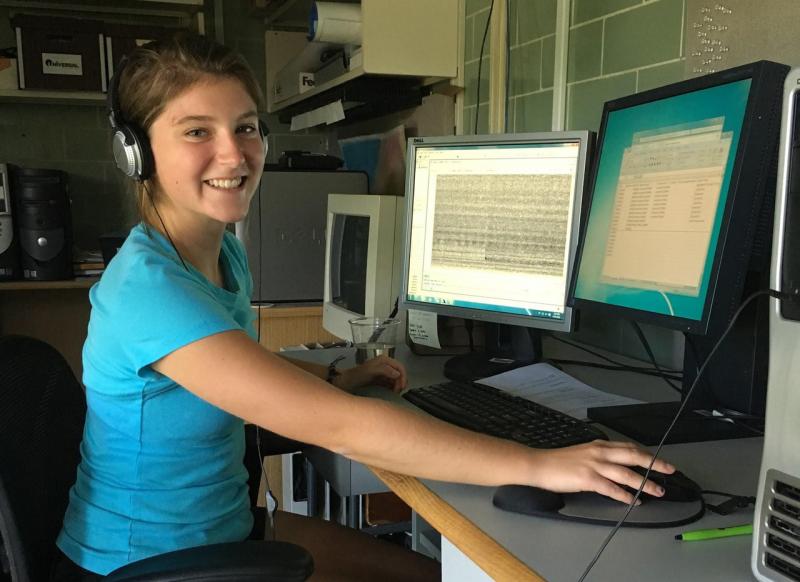 As a dolphin-smitten eight-year-old in Milwaukee, Wisconsin, I read every book on cetaceans that I could find, to the point that I finished the entire children’s section 599.5 at my family’s local library. A classmate told me that marine biologists study dolphins all day, every day — something I now know to be a misconception — and my second-grade self immediately decided to become a scientist.

However, I didn’t know any scientists and lived in the middle of North America, so my exposure to marine science was limited to what I could create for myself. I read books by Julia Whitty, Jane Goodall, Kathleen Crane, and Denise Herzing, and through their stories these women became role models for me. My first tangible scientific experience came during high school in Mrs. Betty Jo Azpell’s “Independent Science Research Project” class (partnership with Discovery World’s Reiman Aquarium) studying how increased water temperature affects corals. Research required a steep learning curve from me, since I didn’t even know to keep a research log! Advice to future scientists: write down everything, please.

I studied biology at Juniata College in Pennsylvania for my undergraduate degree to establish a strong scientific foundation before zeroing in on oceans. My academic advisor Dr. Vincent Buonaccorsi encouraged me to volunteer on a fish genetics project as a first-year student. Looking back, it was a very small project, but it felt like a really big deal when we got the sequences back and I could read the actual genetic sequences of the fish I had sampled. There’s something about seeing your data visualized and knowing your work created new knowledge that I find super rewarding and important, although the reality is that even small discoveries have to be hard-won. I also completed a National Science Foundation Research Experience for Undergraduates at Marquette University, studied as a guest student at the Oregon Institute of Marine Biology and spent a semester abroad through Universidad San Francisco de Quito’s Galapagos Semester Program.  Because I worked on such a wide array of research projects, I was able to eliminate career options that didn’t interest me and navigate closer to the ones that did — like the work I’m doing now.

My “big break” was as an Ernest F. Hollings scholar sponsored by NOAA’s Office of Education. Through this scholarship, I spent a summer working with scientist Dr. Jenni Stanley of the Science Center’s Passive Acoustics Group and Woods Hole Oceanographic Institution. It was such interesting work and I got along so well with Jenni that after graduating I asked to come back. Fortunately, Jenni was at the beginning of a project funded by the Bureau of Ocean Energy Management that would examine how fish behavior is affected by underwater sound generated through offshore wind energy development.

I now work as a junior acoustician with the Science Center. It is such a unique job to study fish behavioral ecology within the context of fisheries and renewable energy. I know that this work matters, and that knowledge keeps me moving forward. The next step will be graduate school, most likely at the University of Washington in Seattle.

My job location is Highlands, New Jersey, and if you don’t know where James J. Howard Marine Science Laboratory is, a map will show you it’s five miles up a relatively uninhabited (but beautiful) sand bar jutting out into the sea. Moving here to work with the Science Center, I chose not to have a car in an attempt to reduce my carbon footprint, which meant I had to find an apartment within reasonable biking distance of the lab. I also didn’t know anyone in Highlands when I moved here, so between living by myself and having limited means of transportation, the first few months were lonely. I underestimated how personally challenging this move would be for me because I was so focused on having a job in my field.

After relocating, I kept reminding myself on how great a research opportunity the job was, but for the first several months I saw very little action. We kept experiencing project delays, which meant in addition to lacking a community where I lived, I also didn’t have a lot of work to do. The combination strained my normal levels of happiness and purpose and I had to rely entirely on internal motivators to get through the transition. I gave myself small challenges like talk to someone in person every day, which sounds really silly now but at the time was necessary.

Like most transitions, that period — jokingly referred to as “the dark days” by my officemate — passed with time. I joined a choir, got to know my colleagues better, and now have enough work to do that I worry about getting it all done! While I do not want to go through “the dark days” again, they left me with a clearer idea of what I need to feel sustained as a person and a greater appreciation for my own resiliency.

Tell us about a time in your career when you or your mentor, colleague, or coworker supported you or other women scientists by recognizing, nominating, or rewarding them, or was a champion of change and an ally, or amplified the voices of women when they weren’t being heard?

My supervisors Beth Phelan and Jenni Stanley support me and my career development pretty much daily. Last summer, I gave a talk at the American Fisheries Society Annual Meeting in the wind-energy room on Stakeholder Day. It was an incredible platform to debut my first presentation as a full-time researcher in front of so many career researchers, collaborators, and wind-energy and fisheries representatives. I spent the whole day in that room listening to presenters from different groups and learning a ton about different perspectives in the wind energy world. In the afternoon, I was one of several scientists presenting original research.

The audience was intimidating to me because of how much knowledge was already in the room; I walked up to the podium knowing that I looked young and honestly my leg was shaking the entire time, but I left the podium feeling like a scientist who had contributed to that knowledge. There were lots of questions after my talk, which I take to mean that I had not only delivered a message but that message had been understood enough to warrant follow-up questions. By allowing me present my own work, my supervisors gave me a voice in the wind energy conversation and a right to scientific dialogue.

If you’re just getting started, try as many different types of science as possible; it will help you find out what is or isn’t a good fit. Once you start conducting research, be patient with yourself and accept uncertainty in your work as best as you can. Science is full of question marks! You are doing something that hasn't been done before, and sometimes it seems like the scientific process doesn't always give you answers but instead clarifies what questions you should be asking. There is so much that is unknown at the beginning of a project and in a new work environment that it can be overwhelming. But that's okay because we are capable of learning and growing and can't expect ourselves to have everything figured out immediately.

Most importantly, in life and career, find people who make you want to be the best version of yourself and support and challenge them similarly!