NOAA whale experts are hoping a Juneau-area humpback calf nicknamed Lincoln can free itself from an entanglement after a team of five was able to make a strategic cut to the line Wednesday. 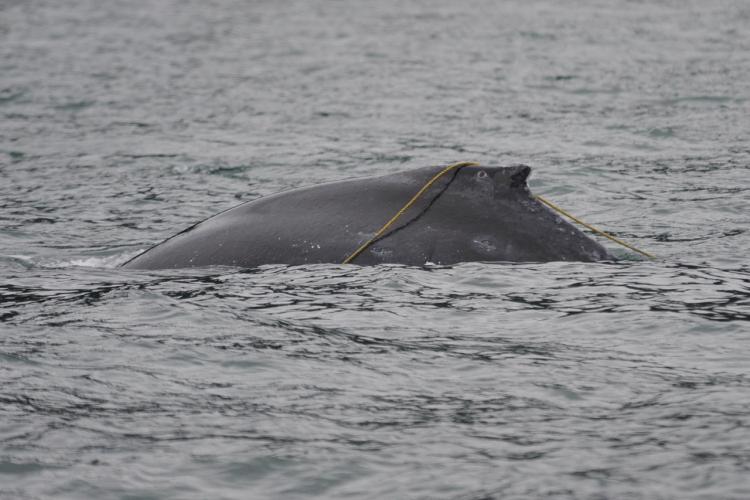 Juneau, AK — NOAA whale experts are hoping a Juneau-area humpback calf nicknamed “Lincoln” can free itself from an entanglement after a team of five was able to make a strategic cut to the line Wednesday.

“The entangled animal is this year’s calf of a commonly-seen humpback whale in the Juneau area,” said Suzie Teerlink, marine mammal specialist for NOAA Fisheries in Alaska. “In fact, the mother is so regularly spotted here she has been nicknamed ‘Juneauite’.”

The mother-calf pair has frequently been seen this season in North Pass adjacent to Lincoln Island—hence the calf’s nickname. It was first reported entangled over a week ago, and the marine mammal team has been waiting for the best opportunity to mount a response. That opportunity came Wednesday, when the whale was spotted near Favorite Reef, west of Auke Bay. The team included John Moran and JJ Vollenweider from NOAA’s Alaska Fisheries Science Center, Sean Egan and Teerlink from the agency’s Alaska Regional Office, and marine mammal expert Kate Wynn.

The whale was entangled with a combination of a blue/green line and a yellow poly line, possibly from a mooring system. The gear is difficult to see because there was no attached flotation. The line was lodged in the mouth of the calf, coming out of both sides of the mouth and trailing behind the animal as it swam.

The trailing lines were initially knotted together, but the response team was able to make a cut to the gear on one side that may make it possible for the gear to slip through the mouth and for the animal to self-release from the entanglement.

“We are interested in sightings of Juneauite and her calf so we can relocate and re-assess the calf to see if there is need for further response,” said Teerlink. She added NOAA is appreciative of reports from the Juneau whale watching community that have helped to locate the calf.

Anyone sighting this entangled humpback calf should maintain at least 100 yards distance. Immediately call the Alaska Marine Mammal Stranding Network Hotline at (877) 925-7773. If unable to call, please radio the US Coast Guard on VHF channel 16 and they will relay the report. Please report latitude, longitude, and direction the whale is swimming.

Well-intentioned mariners should not attempt to free entangled whales themselves. Only trained and well-equipped responders authorized under NOAA Fisheries are permitted to disentangle whales.