A collaborative team of scientists is investigating what caused the death of a female killer whale found on a beach in Portage Bay, Kupreanof Island, northwest of Petersburg. The team 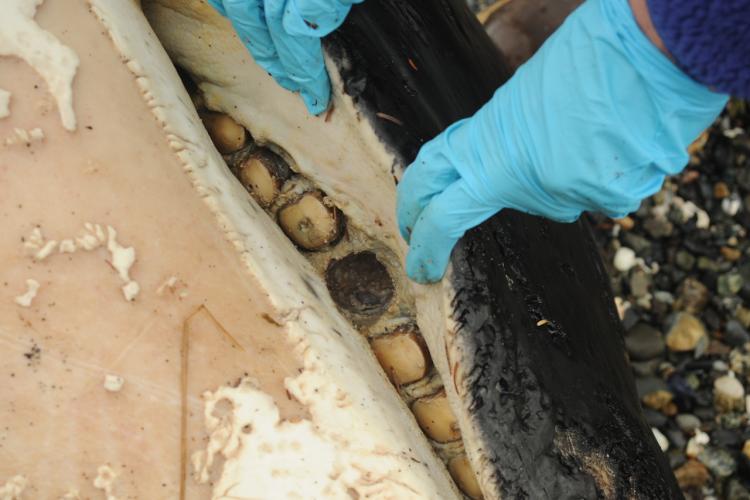 A collaborative team of scientists is investigating what caused the death of a female killer whale found on a beach in Portage Bay, Kupreanof Island, northwest of Petersburg. The team was able to reach the 17.4 foot long carcass on Monday to conduct a full necropsy after Sunday’s plans fell through due to bad weather.

A local Petersburg man reported the freshly dead whale to NOAA Fisheries Alaska Marine Mammal Stranding Network on Friday. NOAA Fisheries immediately dispatched an advance team to secure the whale on the beach in preparation for the necropsy. A photo taken by that advance team helped to identify the animal as an "offshore" killer whale.

The teeth were flattened to the gumline, indicating it was either a very old animal, or an offshore whale. Experts from the killer whale research community identified the animal as 0059, a female offshore first identified in the early 1990s, with documented sightings from California to the Bering Sea.

The necropsy team found no indication of external injuries, although it did have an infection in the jaws. The marine mammal experts were able to collect a full suite of necropsy samples to help determine cause of death.

The necropsy was a collaborative effort between NOAA Fisheries, the University of Washington, the Vancouver Aquarium, and the Petersburg Marine Mammal Center.

NOAA Fisheries urges members of the public to immediately report any stranded or dead marine mammals to the Alaska Marine Mammal Stranding Hotline at (877) 925-7773.