Bottlenose dolphin stranding rates were elevated from July 1, 2013 through March 1, 2015 along the Atlantic coast from New York through Brevard County, Florida. This event was declared an Unusual Mortality Event  on August 8, 2013. Over 1,600 bottlenose dolphins stranded during the event, including approximately 69 live dolphins.

All ages of bottlenose dolphins stranded, with more males stranding than females. The majority of carcasses were in moderate to advanced states of decomposition and many dolphins had lesions on their skin, mouth, joints, or lungs. Based on necropsy, histopathology, and diagnostic findings, the mortality event was caused by cetacean morbillivirus.

NOAA has declared the bottlenose dolphin UME in the mid-Atlantic closed. 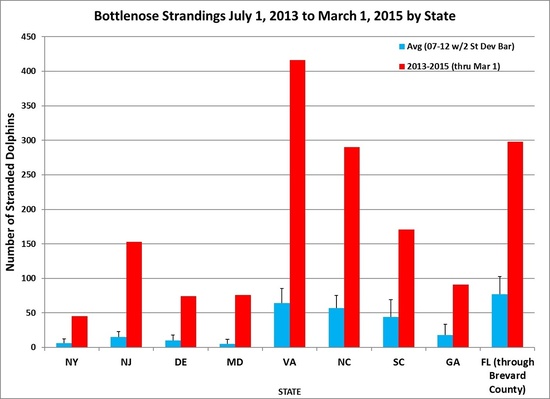 Note: Data are dolphin strandings that have been confirmed and responded to by Stranding Network Members. Current UME Data are preliminary and may be subject to change as more information becomes available.

* Florida data is through Brevard County.

Causes of the bottlenose dolphin UME

Based on gross necropsy, histopathology and diagnostic findings, the cause of the UME was cetacean morbillivirus infections, which is in the same family of viruses as measles. Of the dolphins tested for morbillivirus, approximately 92 percent were dolphin morbillivirus-positive (275 of 299). Additionally, a subset of the stranded dolphins had evidence of active Brucella sp. bacterial infections in the joints, brain, or reproductive organs. Of the dolphins tested for Brucella sp. Using PCR testing, approximately 25 percent (39 of 153) were positive for the organism.

In the years 1987 to 1988, a bottlenose dolphin morbillivirus mortality event was declared along the mid-Atlantic coast, involving over 740 animals from New Jersey to Florida. That massive die-off, along with a humpback whale mortality event in 1987 off the coast of Massachusetts and the 1989 Exxon Valdez oil spill, prompted Congress to formally establish the Marine Mammal Health and Stranding Response Program, with specific instructions for the UME Program as Title IV of the Marine Mammal Protection Act.