Over the last several decades, the Northeast U.S. continental shelf has warmed faster than any other U.S. ocean region. Part of NOAA’s mission is to understand and predict the impacts of this ocean change on the ecosystem and its living marine resources.

Climate change is affecting the nation’s valuable living marine resources and the people, businesses, and communities that depend on them. Climate related changes such as warming oceans, rising seas, droughts, and ocean acidification are affecting the distribution and abundance of marine species in the Northeast U.S. continental shelf ecosystem. Understanding the impacts of climate change is necessary to reduce climate-related effects on living marine resources and the people and communities that depend on them. The NOAA Fisheries Climate Science Strategy is part of a proactive approach to increase the production, delivery, and use of climate-related information needed to fulfill NOAA Fisheries mandates. The Strategy is designed to be customized and implemented through Regional Action Plans that focus on building regional capacity, partners, products, and services.  The Northeast Fisheries Science Center has a variety of research and monitoring efforts that help track, understand, and forecast climate-related impacts on resources and resource-dependent communities.

View the The Northeast Shelf: A Changing Ecosystem storymap.

Drivers of Climate Change and Variability

Climate has a profound effect on life in the oceans. In the Northeast U.S. continental shelf ecosystem, drivers of climate change and variability are derived from both natural and human related activities and contribute to physical, chemical, and biological variability in the ecosystem. Over the last two decades, ocean temperatures in the Northeast have warmed faster than the global ocean. In particular, the Gulf of Maine has warmed faster than 99 percent of the global ocean (see animation below).

Sea surface temperature anomaly comparing the Gulf of Maine to the global average from 1981 to 2017.

Recent studies suggest that a large portion of this enhanced warming is caused by human activity. The major component of human activity that contributes to climate change is historical and continued emission of long-lived greenhouse gases. These gases comprise carbon dioxide (CO2), methane (CH4), and nitrous oxide (N2O). Since the beginning of the post-industrial era in 1750, atmospheric concentrations of these gases have increased substantially because of human activities. 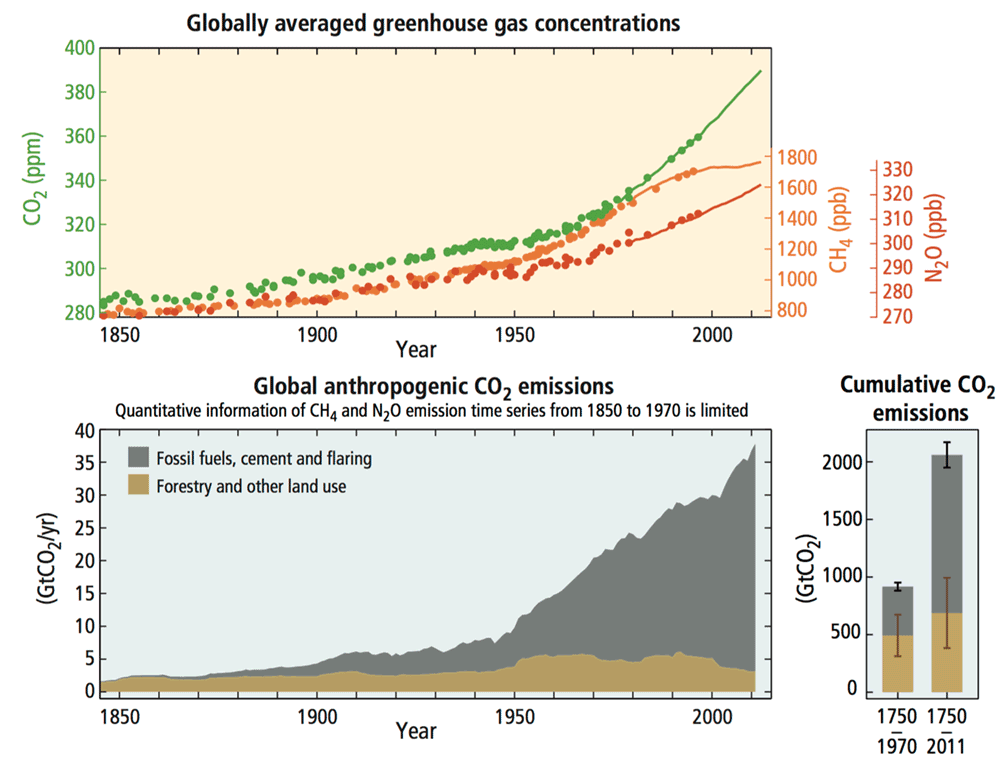 (Top panel) Atmospheric concentrations of the greenhouse gases carbon dioxide (CO2, green), methane (CH4, orange) and nitrous oxide (N2O, red) determined from ice core data (dots) and from direct atmospheric measurements (lines). Indicators: (Bottom panel) Global anthropogenic CO2 emissions from forestry and other land use as well as from the burning of fossil fuel, cement production, and flaring. Cumulative emissions of CO2 from these sources and their uncertainties are shown as bars and whiskers, respectively, on the right hand side. Reproduced from IPCC (2013) with permission.

Monthly (blue) and running average (orange) index representing the north wall of the Gulf Stream. Positive values represent a more northerly Gulf Stream position.  There has been a robust increasing trend over the last eight years.

We are also observing natural swings in the Earth's climate that impact the Northeast U.S. continental shelf ecosystem. For example, large-scale climate oscillations in the North Atlantic Ocean are associated with the North Atlantic Oscillation and the Atlantic Multidecadal Oscillation. The position of the Gulf Stream is also linked to the ecosystem’s climate and oceanography. A more northern position of the Gulf Stream is associated with warmer water in the region. Similarly, changes in the Atlantic Meridional Overturning Circulation can also impact the oceanography of the NES.

2012 was the warmest on record in the region, with an annual mean surface water temperature ~2oC warmer than the 1981-2018 average. Observed marine conditions can provide a context for the future mean state of this region in terms of these more intense and more frequent marine heatwaves.

The Intergovernmental Panel on Climate Change (IPCC) fifth assessment of projected global and regional ocean temperature change is based on global climate models that have relatively coarse (~100-km) ocean and atmosphere resolutions. In this ecosystem, the global climate models assessed by the IPCC do not simulate the regional circulation of the shelf and slope waters. Moreover, these coarse resolution climate models cannot resolve the fine-scale bathymetry of the Northeast such as deep canyons, channels, and banks (e.g., Georges Bank), which impact the regional circulation.

The NOAA Geophysical Fluid Dynamics Laboratory’s high-resolution global climate model 2.6 simulates the regional ocean circulation of the Northwest Atlantic Shelf much better than the coarse models assessed by the IPCC. The atmospheric CO2-doubling response from this model shows that the bottom ocean temperature in the Northwest Atlantic Shelf, particularly in the Gulf of Maine, warms at a rate nearly two to three times as fast as the low resolution models. This enhanced warming is accompanied by an increase in salinity. This is due to a change in water mass distribution related to a retreat of the Labrador Current and a northerly shift of the Gulf Stream (see animations below). Both observations and the climate model demonstrate a robust relationship between a weakening Atlantic Meridional Overturning Circulation and an increase in the proportion of Warm-Temperate Slope Water entering the Northwest Atlantic Shelf. Therefore, prior climate change projections for the Northwest Atlantic Shelf may be far too conservative and underestimate the amount of warming expected in the Northeast U.S. continental shelf ecosystem.

The majority of research on historical and projected climate change impacts to the Northeast U.S. continental shelf ecosystem has focused on species distributions. Most of these studies use the Northeast Fisheries Science Center’s fall and spring bottom trawl survey data to build species distribution models (SDMs) for fish, sharks, and invertebrates.  The SDMs are compared to observations, and then future shifts are projected using global climate models. Most of these studies have focused exclusively on species’ thermal habitat (the preferred temperature range of a species) and ocean temperature change using only fall/spring fishery-independent data. New research explores other ocean variables in addition to ocean temperature. Moreover, this new research also uses data collected by fishery observers to build SDMs throughout the entire year as opposed to just for the fall and spring. Results, which can be viewed as interactive graphics here, suggest that SDMs based only on temperature can mask climate vulnerability for key commercial and recreational species such as shortfin squid, American lobster, Atlantic cod, black sea bass, striped bass, summer flounder, and winter flounder.

Fisheries Climate Research in the Northeast