The Northeast’s Passive Acoustic Research Program works on various projects which focus on identifying spawning grounds and their season duration, acoustic diversity, and ecology. We also evaluate if and how human-made sound sources alter fish and invertebrate communication and behavior.

Ambient sounds and intra-/inter-species communication are integral to fish and invertebrate survival. For many marine animals, sound plays a key role in navigation, finding food and mates, and avoiding predators. Our Passive Acoustic Research Group focuses primarily on the sounds produced by fish and invertebrates in the Northwest Atlantic Ocean. We are interested in how key sound-producing species fit into the broader biological soundscape across different habitats and how they are affected by human-made noise. We aim to improve the understanding of fish and invertebrate ecology and help inform conservation and management decisions. 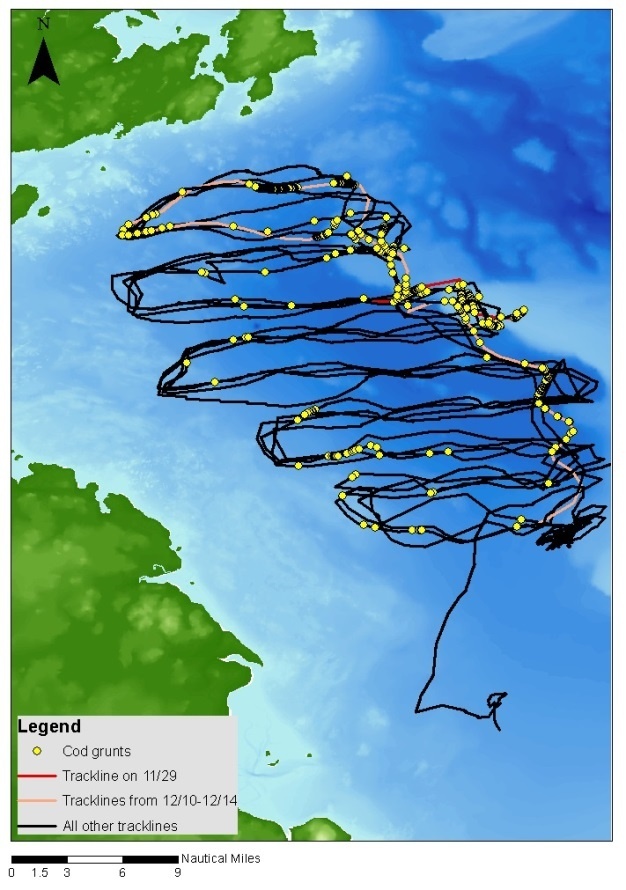 Atlantic cod is a demersal predatory fish that is important ecologically, economically, and culturally in the Northeast. Both commercial and recreational fisheries have targeted this species for centuries. This resulted in a major crash in the North Atlantic in the late 1980s and early 1990s. Since Atlantic cod stocks are still recovering, there has been much research into the genetic structure of cod stocks and their movements based on tagging studies. Research into the reproductive behavior of cod is also gaining importance. Understanding this portion of the cod life cycle could provide valuable information for improving cod stock management.

While the reproductive behavior of cod has been studied for several decades in captive studies, there have been few studies that looked at these behaviors in the wild. During the spawning season, male cod produce low frequency sounds called grunts. These sounds are thought to function either as a courtship display to females or an aggressive display to competitors. By understanding these spawning behaviors, we can listen in on where and when these events occur. Passive acoustic monitoring offers a novel perspective from which to investigate the occurrence, area, and duration of spawning cod aggregations.

Our aim is to provide information  that will help put in place, time, and space closures relevant to cod to help their recovery. We want to integrate this information with active acoustic work on this species in the Northeast United States.

What we have done so far?

There is a collaborative effort between our passive acoustics group, the Stellwagen Bank National Marine Sanctuary, the Massachusetts Division of Marine Fisheries (DMF) and Cornell University's Bioacoustic Research Program. We conducted a pilot study  by placing a recording unit in the Spring Cod Conservation Zone. This is a seasonal conservation zone where a spawning aggregation of cod was known to occur during the spring. Cod were recorded on 98 percent of recording days from the deployment. According to a DMF tagging study the spawning season continued for at least another month after the marine autonomous recording unit was retrieved. Despite producing sound throughout the deployment, a daily pattern of calling was apparent in the data: cod tended to grunt more often during the day than during the night or twilight hours. The results of this analysis were published in 2013.

We continue to collaborate with the Stellwagen Bank National Marine Sanctuary, the Massachusetts DMF, and Cornell University's Bioacoustic Research Program. We also partnered with The Nature Conservancy and local fishermen to look at winter cod spawning aggregations in Massachusetts Bay, in an area known as the Winter Cod Conservation Zone. The aims of this project were to describe both the spatial and seasonal extent of winter cod spawning activity in Massachusetts Bay. This would be based on a combined synthesis of the acoustic telemetry (Massachusetts DMF) and passive acoustic monitoring data, from both fixed station and mobile autonomous glider deployments.

For three successive winters, we deployed a total of 17 marine autonomous recording units (MARUs) (five in 2013, six in 2014, and six in 2015) alongside the DMF "active acoustics” receivers in Massachusetts Bay. These receivers recorded continuously at a sampling rate of 2,000 Hz. We also deployed slocum gliders to track cod presence in Massachusetts Bay. Because one can only hear cod vocalizations 50–100 meters from the source, the gliders could help identify possible cod spawning activity in areas outside of the range of our MARUs.

Due to the extensive time and effort required to analyze large acoustic data sets, we developed an automated cod detector. This significantly reduces the time required to find and validate the presence of cod grunts.

What are we doing now?

We are analyzing data collected in and near the Massachusetts Bay Winter Cod Conservation Zone from 2007–2012 for the presence of spawning cod. There is uncertainty as to where current spawning grounds are. Checking archival data for cod grunts over multiple seasons will show how consistent they are and may help us discover new spawning locations that need protection.

Map: Extent of Atlantic cod vocalizations during each winter spawning season in Massachusetts Bay from 2007–2016. Yellow circles are proportional in size to total number of cod grunts throughout the study (e.g., nearly 100,000 cod grunts were recorded at one site in 2015).

While the main purpose of the archival data sets is to identify the temporal and spatial occurrences of cod spawning aggregations, the data is also useful for other things. By examining the vocalizations in detail, we can analyze call type for “dialects” and match them to call types from other locations. We also plan to investigate whether grunt rates can be used as a proxy to estimate the density of grunting cod on a spawning ground. Density estimates are useful and could complement estimates from traditional trawling surveys.

Currently, there are several known sound-producing fish species in the Stellwagen Bank National Marine Sanctuary. These include Atlantic cod, haddock, pollock, cusk, and cusk eel. Ongoing analysis of acoustic data reveals which species are present and add to the Massachusetts Bay soundscape. We are constantly expanding our fish call library to include these soniferous fish.

Animals and people have developed ways to use sound as an efficient way to communicate in the marine environment. Many ocean organisms actively use and produce sound, and marine mammals use sound as a primary way to communicate over significant distances underwater. Over shorter spaces, fish do the same. Marine invertebrates produce sound for behavioral display purposes, as well as by feeding or movement. Many marine organisms use ambient sound to navigate, to choose their settlement or residence location, and to modify daily behavior such as breeding, feeding, and socializing.

Learn more about this study by reading Underwater sound from vessel traffic reduces the effective communication range in Atlantic cod and haddock.

Effects of Offshore Wind Energy on Fish and Invertebrates 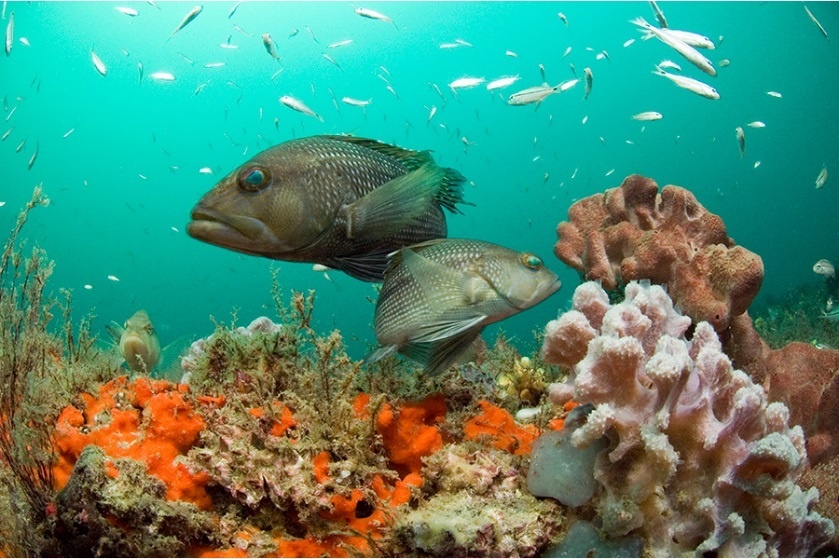 Black sea bass (Centropristis striata) support a valuable commercial and recreational fishery in renewable energy planning areas along the Atlantic Coast and are attracted to structurally complex habitats. Some of these habitats occur within current renewable energy lease and planning areas either seasonally or year-round, depending on water temperature. Commercial and recreational fishermen have expressed concern that sound produced during benthic surveys, pile driving, and operation of renewable energy facilities may be having negative effects on the behavior of black sea bass. This could be causing changes in catchability, flight from disturbed feeding and spawning habitats, and disruption of intraspecific communication.

Longfin inshore squid (Doryteuthis pealeii) may also be affected by acoustic disturbance from offshore wind development. A short-lived (~1 year) cephalopod, the longfin squid is migratory, pelagic, and a well-established model species for sensory ecology and neurobiological investigations. It is the primary commercial cephalopod species of the western North Atlantic, at approximately 16.6 metric tons and $41 million per year since 2000. A wide range of predators consume the species, which is considered an ecologically key prey item for a variety of marine mammals, seabirds, and finfish. Fishery stakeholders have expressed concern that summer spawning on the continental shelf could be disrupted by acoustic disturbance from offshore wind construction and operation.

We are collaborating with our Sandy Hook laboratory, the Woods Hole Oceanographic Institution, and the Bureau of Ocean Energy Management. We are examining the effects of the renewable energy industry (e.g., construction noise of offshore wind farms) on the behavior of black sea bass and longfin squid. Our objective is to characterize and replicate the acoustic signals from the construction and operation of an offshore wind facility and evaluate the effects of noise on commercially and recreationally important fish. The project evaluates the behavioral and physiological effects on black sea bass and longfin squid to the reproduced acoustic signal expected during the construction and general operation of an offshore wind facility. This study aids in evaluating acoustic impacts that may reduce the quality of essential fish habitat necessary for feeding and breeding. 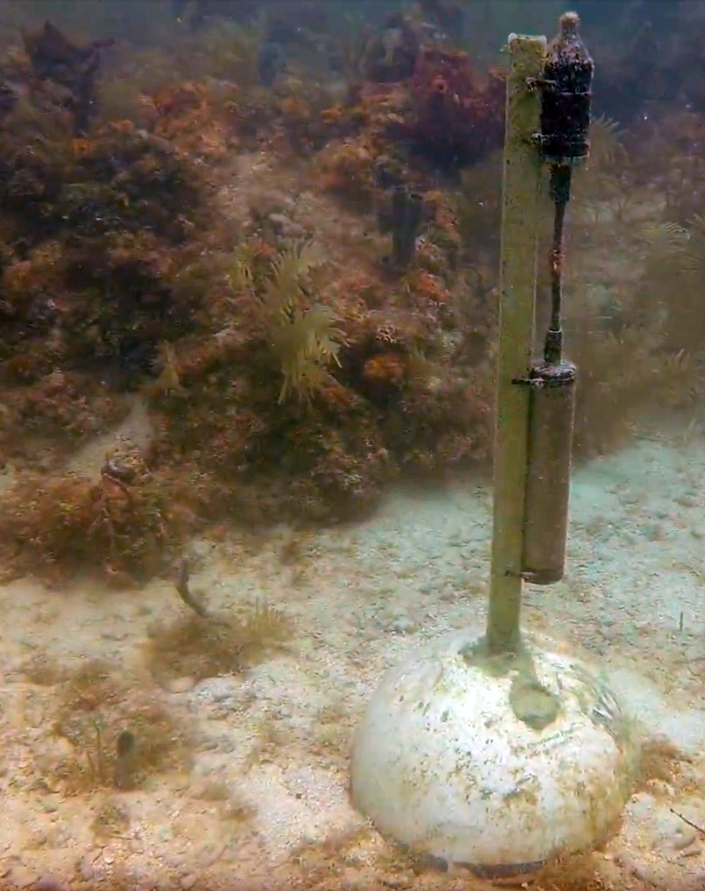 Two SoundTrap 300 STDs are used for recording in each sanctuary.

The acoustic information gathered is used to classify the acoustic signatures of each of the eight sites. This includes relative contributions from human-produced noise sources as well as marine wildlife (invertebrates, fish, and mammals) and geophysical sources (wind, waves).

We aim to continue this sampling during all four seasons of the year. We will use this data to contribute to a more complex status assessment regarding current ecological soundscapes within these sanctuaries. The long-term goals of this project are to gain information on:

We also use this data to aid in the development of novel acoustic metrics and test these against more traditional metrics.

To date, we have found the two sites at Gray's Reef sanctuary the most acoustically diverse. There were significant daily patterns in sound pressure levels due to the acoustic activity of abiotic (tidal currents at new and full moon phases) and biotic factors. The recordings indicate an enormous diversity of fish and invertebrate acoustic signals. Human-made sound is also distinguishable and is likely due to heavy research vessel activity at the site. Vessel signal is the largest contributor towards changes in the sound pressure levels.

Stellwagen Bank sanctuary has a very different acoustic signature. Low frequency signal of large vessels dominated the recordings. Broadband sound pressure increased around midday during all moon phases. This was due to an increase in the number of vessels not only in the immediate vicinity of the hydrophones but also at greater distances. The identified acoustic telemetry tags detected in this sanctuary came from great white sharks, Atlantic cod, haddock, Atlantic sturgeon, American shad, Atlantic bluefin tuna, and striped bass.

To learn more about the Four Sanctuaries Monitoring Project, please watch this video or visit the Office of National Marine Sanctuaries website.