The Forum is an information exchange venue to bring together river herring practitioners, managers, researchers, and community groups from across the species range. Below are the presentation abstracts from the March 29, 2021 meeting. 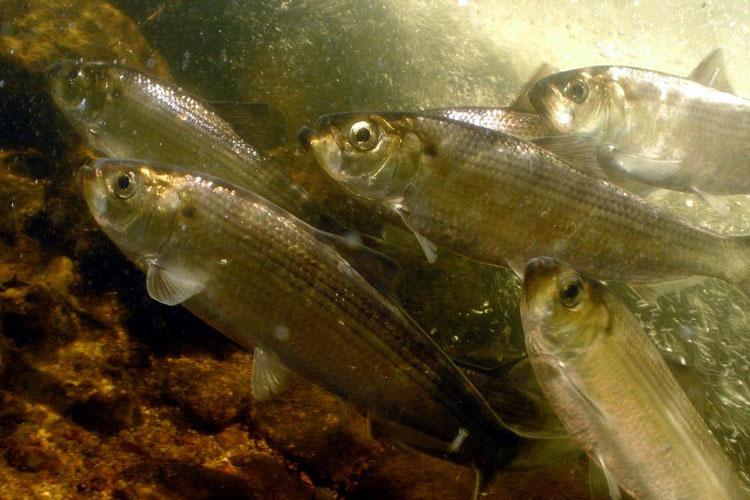 As part of an on-going modeling project to simulate Alewife population dynamics (Nelson et al. 2020), I programmed a feeding model for Alewife post-larvae/young-of-the-year (YOY) in an attempt to model growth in a more realistic manner. I developed individual models for six freshwater prey (rotifers, cladocerans and copepods) and eight marine prey (copepods) and linked a foraging model with different prey selection functions to them to obtain estimates of consumption that are used directly in a bioenergetics model to calculate growth.

More work is needed to further fine-tune the model. The major impediment for quicker progress is computing power. It takes three hours to complete one year of simulation for the YOY sub-model which is far greater than the time it takes to run the complete Alewife life history model for 55 years (about one and a half hours). Given this limitation, I may have to consider reducing the complexity of the current model in order to achieve reasonable computation times. However, I do believe this model holds great promise for predicting growth dynamics of YOY Alewife.

Reference: Nelson, G . A., , B. I. Gahagan, M. P. Armstrong, A. Jordaan and A. Bowden. 2020. A life cycle simulation model for exploring causes of population change in Alewife (Alosa pseudoharengus) Ecological Modelling 422: 109004.

Accurate genetic stock assignment is an essential component of Alosine restoration and recovery efforts. Over the past decade, marked improvements in assignment accuracy have been achieved using microsatellite and double digest restriction-site associated DNA SNP markers. Using these approaches, fish can be assigned to regional stocks with a high degree of accuracy, but assignment to individual rivers remains elusive. Advancements in low coverage whole genome sequencing (lcWGS) technology shows considerable promise for achieving higher assignment accuracy to individual rivers. The higher-resolution information about differentiation between populations provided by lgWGS allows markers to be selected from the most informative regions of the genome. Using lgWGS data for 372 individuals from twelve reference populations along the east coast of North America, we are developing an easily assayable panel of highly informative SNP markers for genetic stock assignment in America shad (Alosa sapidissima). Using 20-30 SNP loci, our preliminary analysis achieved assignment accuracy similar to previous studies based on microsatellite markers (~73 percent self-assignment). With 40-60 SNP loci, we were able to achieve assignment accuracy to individual rivers greater than 88 percent. Going forward, we are interested in expanding the number of reference populations used in our analysis and are looking to collaborate with individuals, organizations, or agencies involved in shad monitoring and restoration efforts. Our initial findings show considerable promise for accurate assignment of shad to individual rivers, and a similar approach could improve assignment accuracy in Alewife (A. pseudoharengus) and Blueback herring (A. aestivalis).

River herring restoration efforts have primarily focused on improving access and size of spawning habitat for adults. Thus, the prioritization of restoration sites is based principally on acreage. However, not all nursery habitat will equally promote production, particularly as freshwater systems experience rapid environmental changes. While it is critical to develop climate-ready prioritization metrics, significant data gaps on the drivers of river herring production in nursery habitats hinder this process. We used laboratory experiments to examine thermal limits to anadromous juvenile river herring production under high and low food availability. We measured survival, growth, condition, and performance as a function of temperature, as decreases in these metrics would indicate lower fitness and thus, lower habitat quality. For mid-range populations, current (26 - 29°C) and near-future (30 - 32°C) summer thermal regimes led to decreased growth rates and lower feeding performance. Under low food availability, juvenile blueback herring were unable to maintain body condition (i.e. energy density) at higher temperatures. While survival was not significantly impacted by temperature, sublethal decreases in fitness and changes in prey supply will be of increasing concern as thermal regimes become warmer and more variable. Our findings suggest that ongoing northward range shifts in both river herring species could correlate with decreases in production of early life stages with climate change. This research and others focused on drivers of production provide an opportunity to improve climate-ready prioritization of sites for restoration.

Over the past 20 years, efforts to restore diadromous fish in Maine’s river systems have led to significant increases in run size for many species, namely river herring. As the abundance of river herring populations have increased, it has become more pertinent to understand the role of river herring as prey for marine predators in the Gulf of Maine (GoM). To assess our current understanding of this ecological connection, we organized a workshop for scientists who are actively researching the role of diadromous fish as prey in the GoM. Over two days, scientists shared current research and preliminary results to foster discussion on the “state of the science”. Preliminary results from Maine Department of Marine Resources trawl survey and traditional diet sampling indicate that river herring abundance is variable at spatial and temporal scales in the nearshore GoM, with indications of overall increased abundance in recent years. Despite the perceived increases in river herring abundance, river herring detection in diets has been relatively low among the small number of sampled marine predators. Of these sampled marine predators are Atlantic cod (Gadus morhua), a groundfish with low abundance and truncated size distribution. However, river herring have recently been detected for the first time in the diet of Atlantic bluefin tuna (Thunnus thynnus) sampled in the GoM. Further, stable isotope analysis is proving to be a powerful tool for detecting the presence of freshwater prey contributions to the diets of marine predators at a broader temporal scale than traditional diet sampling. Participants discussed potential synergies within these investigations and committed to a future meeting to explore these topics further and formalize connections by coordinating sample collection, comparing methodologies, and sharing results. This suite of studies is slated to continue and therefore strengthen our understanding of the role of diadromous fish, especially river herring, as marine prey.