Meet the Voices of Our Upcoming 2021 Webinars “Cooperative Research: Facing the Challenges of COVID-19”

Here's more information on the researchers and fishermen who will share their experiences conducting science during a pandemic.

Facing the Challenges of COVID-19

During this webinar series, regional scientists and industry partners will share the stories of how they adapted projects and leveraged self-reported data collection strategies to continue conducting science during a global health crisis.

These partnerships and success stories exemplify how cooperative research provides flexibility in operations. It also promotes communication between fishermen and researchers needed to progress regional science goals during unprecedented times.

These researchers will share lessons learned while conducting cooperative research during the COVID-19 pandemic at two, 90-minute  WebEx virtual workshops on February 25 and March 4, 2021.

The first webinar in this series will focus on how cooperative research field work was adapted to ensure safe operations during the COVID-19 pandemic.

Dave McElroy and industry partner Captain Eric Hesse of the F/V Tenacious II will talk about how they developed a fall survey plan that included safety measures to mitigate the spread of COVID-19. 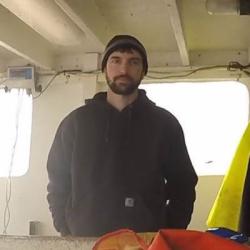 Dave McElroy grew up in Falmouth, Massachusetts. He completed his undergraduate degree at Connecticut College and graduate school at the University of Rhode Island in the fisheries department. He conducted his graduate research in collaboration with our science center’s  Apex Predators Program. He has worked for both our Cooperative Research Branch and our Population Biology Branch. He has contributed to a variety of industry-based research including surveys, biological studies, tagging projects, and gear studies. He currently leads the center’s Cooperative Gulf of Maine Bottom Longline Survey. 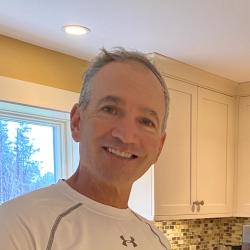 Eric Hesse owns the Tenacious II and is a participant in the Bottom Longline Survey. He is a career fisherman and advocate for sustainable fishing methods and science-based fishery management. Eric is a founding member of the Cape Cod Commercial Fishermen's Alliance and holds degrees from Bates College and the University of Massachusetts, Amherst. Beyond his participation in the bottom longline survey, Eric has worked on a number of research projects over the years including cod genetics research, cod mortality, haddock hook research. He has participated in tagging studies involving cod, dogfish, ocean sunfish, halibut, and bluefin tuna. He has supported oceanographic research with several of the organizations working in the Cape Cod research community.

Dustin Gregg and industry partner Bobby Rhule of the F/V Darana R will talk about how they adapted the Northeast Area Monitoring and Assessment Program Trawl Survey to include safety protocols that prevented the spread of COVID-19 during the survey. The NEAMAP survey has been led by the Virginia Institute of Marine Science (VIMS)  since 2006, and is a cooperative state-federal data collection program. 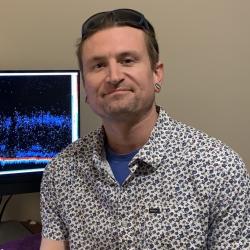 Dustin Gregg is the chief of Trawl Survey Operations for the VIMS Multispecies Research Group. He has been the chief scientist of NEAMAP since 2014, led myriad other surveys at VIMS, and serves as an advisor to both state and federal surveys. Dustin has engaged in cooperative research for 10 years, logging nearly 1,000 days at sea. He is a member of the Northeast Trawl Advisory Panel and Atlantic States Marine Fisheries Commission NEAMAP Operations Committee. His research interests include hydroacoustics and survey gear efficiency. 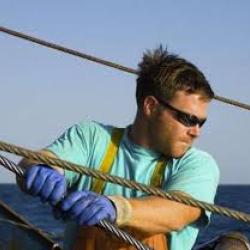 Robert Ruhle is the mate, relief captain, and co-owner of the Darana R, out of Wanchese, North Carolina. Captain Ruhle has been engaged in commercial fishing full-time since 1995, participating mainly in the Atlantic croaker, Atlantic herring, summer flounder, and Illex squid fisheries. He has been involved in cooperative research throughout his career. He was instrumental in the development and implementation of NEAMAP, and has played a major role in all subsequent survey cruises. He currently serves on the Northeast Trawl Advisory Panel, as well as the Mid-Atlantic Fishery Management Council’s Mackerel/Squid/Butterfish, Summer Flounder/Scup/Black Sea Bass, and River Herring & Shad Advisory Panels. Captain Ruhle was recently named to the Responsible Offshore Science Alliance Advisory Council. 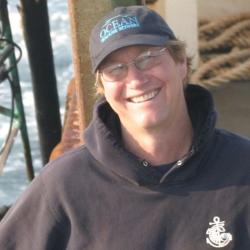 Kevin Stokesbury is a professor in the Department of Fisheries Oceanography, School for Marine Science and Technology (SMAST), at the University of Massachusetts, Dartmouth. His research examines the marine ecology of invertebrates and fish, their spatial distribution, population dynamics and the impacts of fishing and energy development. For the past 20 years, his work has focused on sea scallops, including stock assessment, rotational fishery management strategies, growth and mortality estimates, gear development and environmental assessment. He began using his scallop survey research to examine the habitats being considered for wind farm development in 2012 and is now leading the examination of the before-after-control-impact studies for macro-epibenthic invertebrates in the Vineyard Wind area. Most of his research is collaborative with the fishing industries of Canada and the United States, and he was awarded the David H. Wallace Award from the National Shellfish Association (2013) and the New Bedford Standard-Times’ Southcoast Man of the Year (2018) for his two decades of science in the public interest, and the connections he has made between fishermen and science. His research has been published in 68 scientific papers and five book chapters. 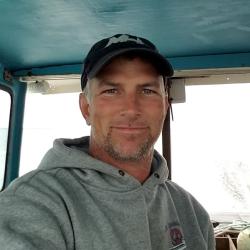 Jarrett Drake owns and operates the 42-foot fishing vessel Cynthia Lee, and the 48-foot fishing vessel Encourager. His fishing experience began in 1985 when he first got his junior commercial lobster license. For the past 34 years he has been lobstering the waters of Buzzards Bay. In 1997, he started fishing the federal waters of Rhode Island Sound and south of Martha’s Vineyard out to Cox’s Ledge. Captain Drake sits on the Board of Directors for the Lobster Foundation of Massachusetts and has been involved in many research projects for the Massachusetts Division of Marine Fisheries, the Commercial Fisheries Research Foundation, SMAST, and the University of Maryland. He is the vice president, delegate, and executive committee member of the Massachusetts Lobstermen's Association, and has been appointed to the Area 2 Lobster Conservation Management Team by the Massachusetts Division of Marine Fisheries. He is a member of the federal Bureau of Ocean Energy Management’s Fisheries Working Group on Offshore Renewable Energy, a member of the Responsible Offshore Science Alliance Advisory Board, and a board of directors’ member of the Responsible Offshore Development Alliance.

Tasha O’Hara and industry partner Captain Joe Correria of the F/V Kayla Rose will talk about how they developed a sea scallop survey plan that included safety measures to mitigate the spread of COVID-19. 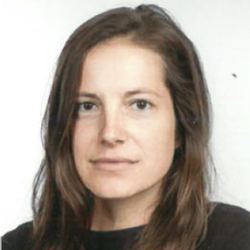 Tasha O’Hara is a research biologist at Coonamessett Farm Foundation  in East Falmouth, Massachusetts. She is the principal investigator on the annual stereo-optical scallop biomass survey, which uses the HabCam v3, and manages all aspects of the HabCam project. She holds a master’s degree in resource management from the University of Akureyri, and has completed fisheries surveys in Alaska, Iceland, and the Northeast region of the United States.

Joe Correia is a retired sea scallop fisherman with more than 35 years of experience scalloping, including 25 years as captain of the Kayla Rose, which he co-owns with Arnie’s Fisheries. Joe is a great supporter of cooperative fisheries science and is dedicated to sharing his knowledge to ensure sustainable fishing for future generations.

The second webinar in this series will focus on how fishermen worked with researchers to independently collect scientific data during the COVID-19 pandemic, and how this experience may be used to bridge data gaps.

Andy Jones and industry partner Doug Feeney of the F/V Noah will discuss how our center’s Study Fleet partners continued to collect fine-scale catch, effort, and environmental data during the COVID-19 pandemic and how the data are being used. 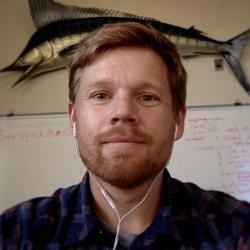 Andy has worked in support of our science center since 2016, first as an analyst for the Fisheries Sampling Branch and recently as a fisheries biologist for the Cooperative Research Branch. He was involved in developing the video-based electronic monitoring program. Andy leads the branch’s efforts to use Study Fleet and other fishery-dependent data to address science questions, and inform stock assessments and fisheries management.

Growing up in California in a family of avid sailors, Andy has always spent time in or around the water. He moved to Ithaca, New York to pursue a degree in natural resources at Cornell University (2006). After college he worked for NOAA's Southwest Fisheries Science Center in Santa Cruz, CA before moving to Yale University for his Ph.D. (2015) and then to Woods Hole Oceanographic Institution for a postdoctoral position (2016). 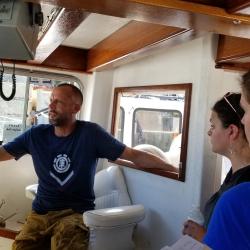 Doug, a longtime Cape Cod fisherman, targets dogfish, groundfish, and squid on his fishing vessel, the Noah. He rebuilt most of the vessel by hand after purchasing the hull in 2013. Doug supports the small-boat fishery by advocating for the use of dogfish in more domestic markets through his work with the Chatham Harvester Co-op.

Dave Bethoney and Fred Mattera will discuss how the Commercial Fisheries Research Foundation’s (CFRF’s) research fleets continued to collect fine-scale biological and environmental data during the COVID-19 pandemic and how the data are being used. 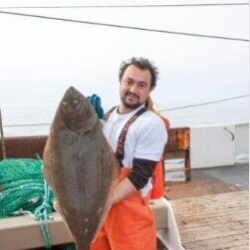 Dave Bethoney is the executive director of the Commercial Fisheries Research Foundation. Previously he was a research assistant professor at the University of Massachusetts Dartmouth School for Marine Science and Technology (SMAST). There, he developed a research program on the foundation of practical application and direct engagement with the fishing industry. He also obtained his M.S. and Ph.D. from SMAST. 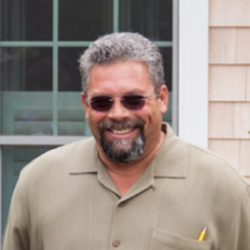 Fred is a commercial fisherman and has been in the industry for more than 40 years. He has owned and operated an 84 ft freezer trawler out of Point Judith, Rhode Island. since 1984. Fred currently serves as the executive director of the Commercial Fisheries Center of Rhode Island and as president of CFRF.

Mel Sanderson and Mary Hudsonn will discuss how Cape Cod Commercial Fishermen’s Alliance (CCCFA) members have used electronic monitoring tools to collect catch and effort data during the COVID-19 pandemic and how the data are being used. 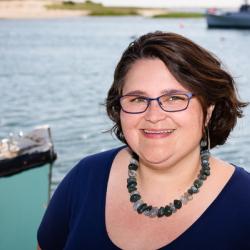 Melissa Sanderson joined the CCCFA in 2004, working to sustain small-boat fishing opportunities. For the last four years she has managed the regional groundfish electronic monitoring Audit Model Pilot Project. Mel has a B.A. in marine biology from Occidental College and a master’s degree in coastal environmental management from Duke University. 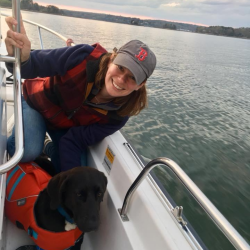 Mary is the director of Fisheries Programs at Maine Coast Fishermen’s Association (MCFA), and manager of the Maine Coast Community Sector (MCCS), established to help manage catch-share programs under the federal groundfish fishery management plan. She works closely with MCCS members on issues related to their groundfish fishing businesses and the working waterfront. Mary is also lead on MCFA's involvement in camera monitoring projects in groundfish and scallops fisheries, and runs MCFA's Fishermen Feeding Mainers Program.

Jim Manning, Davie Goethel, Rob Martin, and Mike Marchetti will discuss how the Environmental Monitors on Lobster Traps and Large Trawlers (eMOLT) program has proceeded through the pandemic in its 20th year of operation. 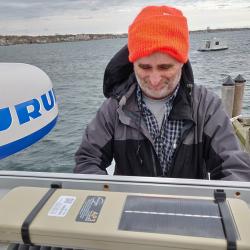 Jim Manning, oceanographer at our science center’s Woods Hole Lab, went to sea back in the 1990s. He was frustrated that these research cruises did not adequately detect the short-timescale, year-round variability in the shelf seas. Some experimenting with ocean models at the time demonstrated the need for more data. During his midnight watches out on Georges Bank, he noticed many vessel lights on the horizon. So, on his return to land, he started going to the docks, chatting with fishermen, and realized they were interested in oceanography. He hasn’t been to sea since, but is now getting lots of data from them. 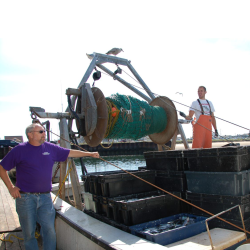 David is the owner-operator of the 44-ft trawler Ellen Diane, which fishes out of Seabrook, New Hampshire. He has a strong interest in finding solutions for fishing in a sustainable manner. David is a former 3 term member of the New England Fishery Management Council. With a degree in Biology, he has successfully completed numerous cooperative research projects and is an original contributor to the Study Fleet program. With eMOLT, David has reported more than 1,200 hauls in realtime off of the New Hampshire coast.