NOAA and Partners Inspire Young Scientists in the Nation's Capital

Students from McKinley Technology Middle School in Washington, D.C. who participate in the NOAA Enrichment in Marine Sciences and Oceanography (NEMO) program have unique opportunities to learn about aquatic science in their own backyard. 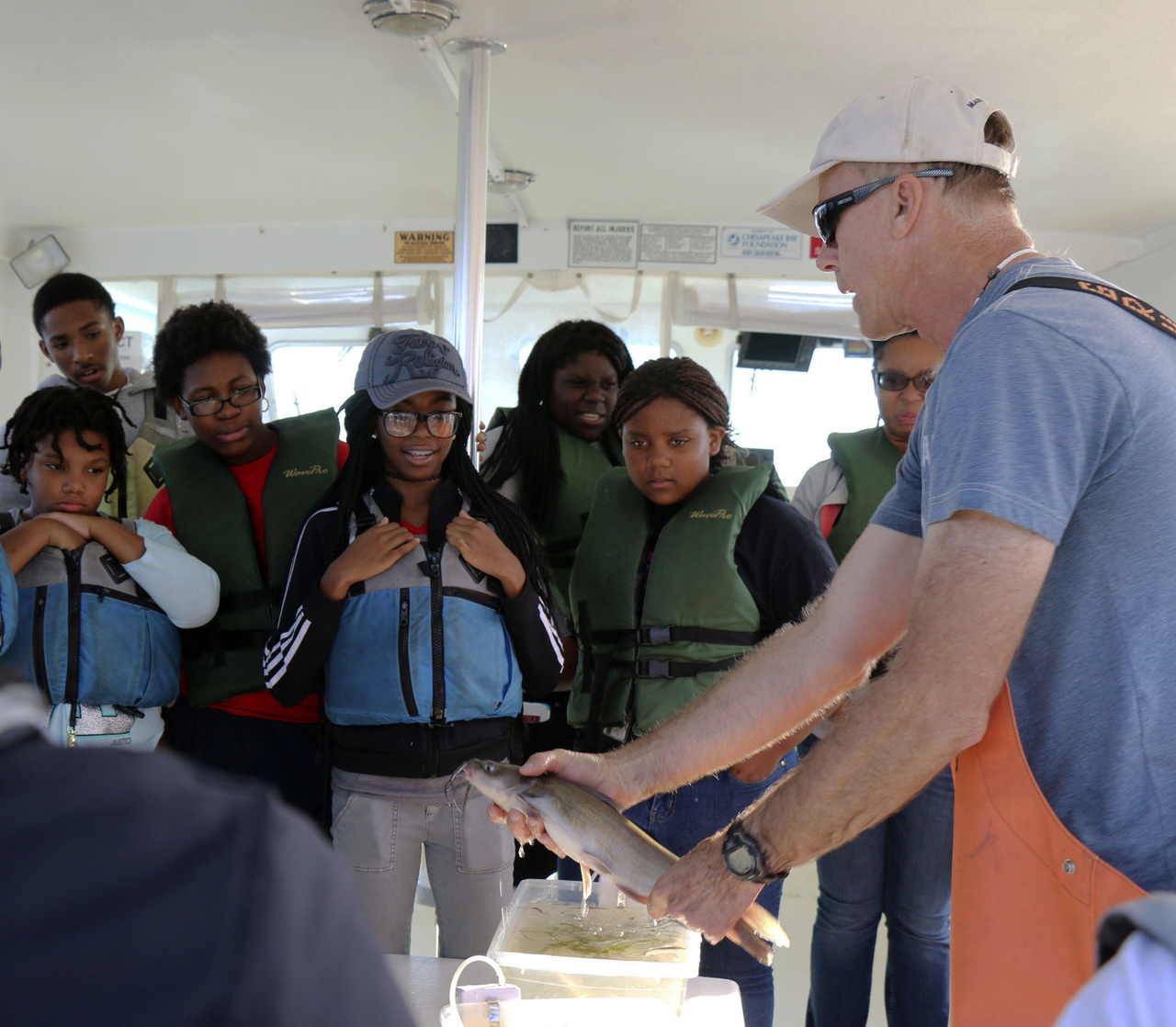 Students from McKinley Technology Middle School in Washington, D.C. who participate in the NOAA Enrichment in Marine Sciences and Oceanography (NEMO) program had a unique opportunity to learn about aquatic science. The students participated in the Potomac River Program, a day-long boat trip on the Potomac River offered by the Chesapeake Bay Foundation. They explored the river's ecosystem and aquatic life. Cliff Cosgrove and LaTonya Wilson, scientists from NOAA's National Coast Survey, joined the students. They served as mentors and helped guide activities during the day-long trip.

Excitement ran high: this event was the first time on a boat for nearly a quarter of the students. Two Chesapeake Bay Foundation captains and educators, Dave Gelenter and Eric Marshall, led students through a series of hands-on activities. They helped students understand how the aquatic worlds of the Anacostia and Potomac Rivers are intimately linked to daily city life and our oceans. The aspiring young scientists learned about the role water plays in our everyday lives and how to perform water-quality tests to assess the river's health. Perhaps most importantly, they had a chance to get hands-on experience with river creatures like catfish, shad, and bass.

Capturing the attention of middle school students isn't always easy. McKinley science teacher Kamelia Keo finds that students respond well to hands-on activities. She appreciates the flexibility and freedom the NEMO program gives, allowing her to expose students to STEM (Science, Technology, Engineering and Math) careers. "Kids like putting themselves in the position of scientists," Keo says. "A lot of [them] disassociate science with real life. NEMO gives students a different perspective."

Some students participate in NEMO because of the interesting experiments and lessons. Other students see NEMO and this field trip as a first step in their careers. One student says that she wants to be a math or science teacher when she grows up, and feels like NEMO is a step in the right direction. Another student says he wants to be a marine biologist when he grows up. "NEMO is helping me learn how to save marine animals," he said. He cited a simulation activity where students cleaned up an oil spill while balancing the tradeoffs of a limited budget and lack of resources. 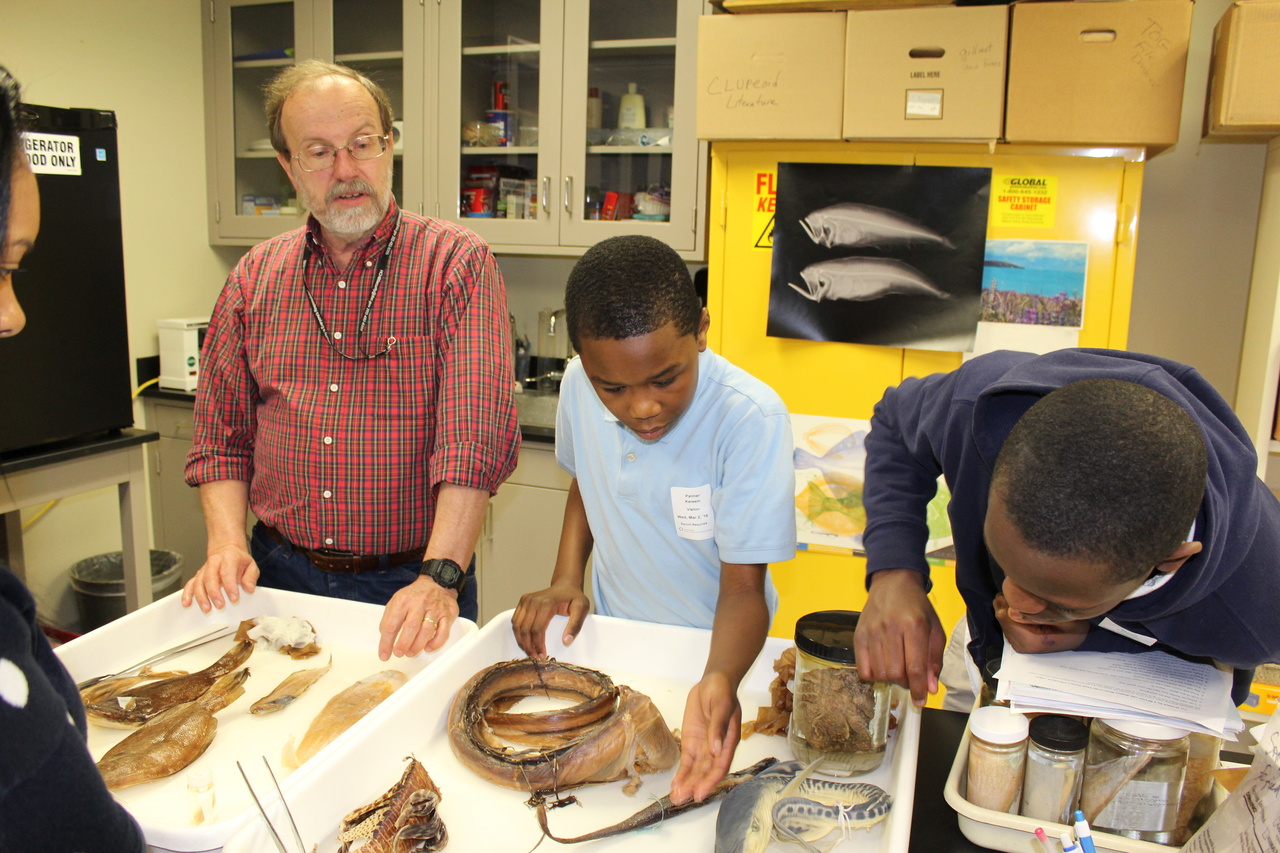 Students from McKinley Technology Middle School in Washington, D.C. who participate in the NOAA Enrichment and Marine Sciences and Oceanography (NEMO) program were treated to a unique day of learning and fun as part of the 2016 White House National Week at the Labs. The initiative was part of President Obama's effort to encourage the nation's youth, particularly minorities and young women, to pursue careers in science. NOAA Fisheries worked with the Smithsonian Institution's National Museum of Natural History to give students an inside look at an active marine biology laboratory. They also got a hands-on opportunity to test their skills in ocean engineering.

The first stop was a behind-the-scenes tour of the NOAA Fisheries National Systematics Laboratory located at the Smithsonian Institution's National Museum of Natural History. This was one of 50 labs around the country to open its doors to students as part of the White House initiative. Scientists at this facility have the expertise to determine whether an unknown marine animal discovered on a beach or research cruise is a new species. NOAA scientists helped teach students about marine biodiversity and introduced students to their work on marine animals ranging from jellyfish and squids to fish and dolphins.

"It is a pleasure to introduce young, inquisitive minds to the work we do here at the National Systematics Lab. Some of these students could become the next generation of marine scientists," said Collins. Students also had the opportunity to see a preserved eye from a giant squid—the largest eye in the animal kingdom!

Next, Bart Merrick and Kevin Schabow from NOAA's Chesapeake Bay Office taught students about marine navigation, observation, and ocean engineering through hands-on activities. Students designed and built their own buoys and tested their results to determine which design was the most effective. "Watching students use their natural creativity to address a scientific problem is a highlight of this activity," said Merrick. "During the testing phase, we get to see the specific moment that students begin to understand how design affects utility."

Students also had an opportunity to explore the Qrius Education Center and Sant Ocean Hall. Volunteers led students through hands-on activities designed to complement the exhibits. Students learned about many ocean topics from marine debris and ocean exploration to ocean animals like horseshoe crabs and whales. One student said, "Before today I had never seen a horseshoe crab, and now I get to take one home with me." (Abandoned shells of horseshoe crabs given to the students at the end of the day).

NOAA Fisheries and the National Aquarium Team Up to Teach D.C. Students about Marine Science 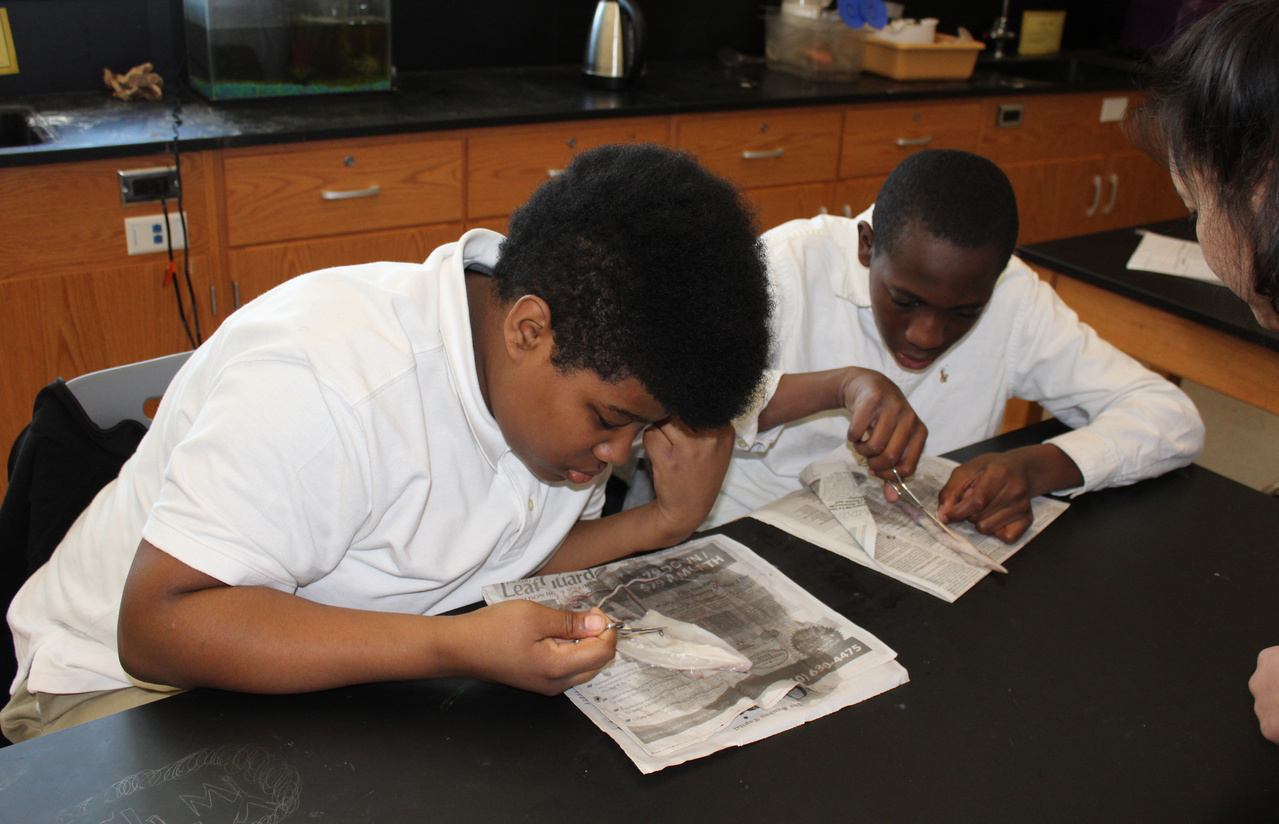 Students at McKinley Technology Middle School in Washington, D.C., spent an afternoon learning about marine science and exploring the unique biology of squid. NOAA's Enrichment in Marine Sciences and Oceanography (NEMO) program facilitated this event, led by David Christopher of the National Aquarium in Baltimore, Maryland.

During the activity, students dissected squid to learn how animals can adapt to thrive in a marine environment. Some key lessons they learned were:

For many students, this opportunity was their first hands-on experience in anatomy.

"My favorite part of today was finding all three hearts and the brain," remarked one student. "Finding the squid's pen and writing my name in squid ink was the best part," noted another.

"Teaching local students about marine animals is one of the best parts of my job," said Christopher. "Encouraging scientific creativity is exceptionally rewarding, these students are the future of science."

NEMO organizer and McKinley science teacher Kamelia Keo, believes that hands-on activities are one of the best ways for middle school students to learn. Keo has been involved with the program for 3 years. She appreciates the opportunities this program gives her to expose students to marine science and oceanography.

"These are good students," said Keo. "They are bright and inquisitive. I enjoy teaching them about marine animals and possible career paths in science. The NEMO program helps expand their educational horizons."

These field trips were facilitated by NOAA's NEMO program which is designed to promote ocean literacy in D.C.'s public schools. NOAA collaborates with local schools and partners to provide students with meaningful educational opportunities in the ocean sciences and introduce them to new career paths.