A history of the first research vessel named Albatross. 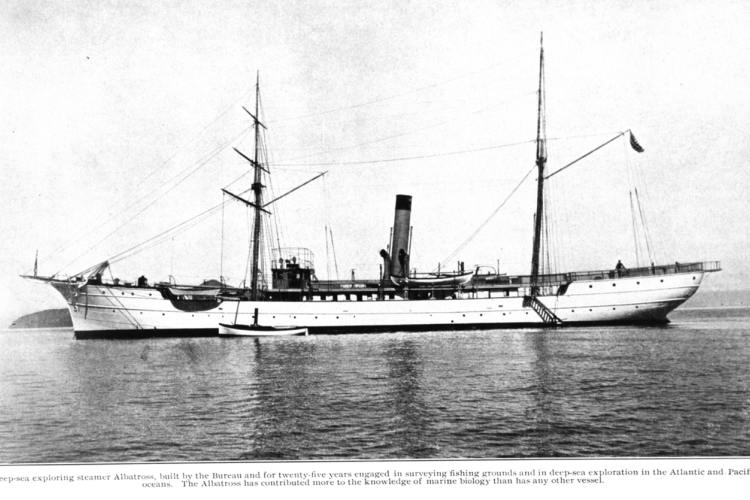 The fisheries research vessel the Albatross IV perpetuates an illustrious name among research vessels starting with the steamer Albatross of the United States Commission of Fish and Fisheries. In the year 1881, at the suggestion of Commissioner Spencer Fullerton Baird, Congress authorized an appropriation totaling $148,000 for the construction of the vessel. Plans were drawn by Charles W. Copeland of New York and a contract for construction was awarded to Pusey & Jones of Wilmington, Delaware. The keel was laid in March 1882, the ship was launched in August, and she made her trial run on December 30.

Thus began the long career of the United States Fish Commission steamer Albatross, the first vessel built especially for marine research by any government. During her forty years of service she surveyed the Newfoundland Banks, the Bering Sea, visited scattered archipelagoes of the Pacific, and served in two wars." (Hedgpeth, 1945, American Neptune, vol. 5).

The Albatross was an iron twin-screw vessel propelled by two independent two-cylinder steam engines designed by Mr. Copeland and built by Pusey and Jones. Each engine developed about 200 net shaft horsepower delivered independently to each of the screws which were nine feet in diameter and constructed of cast iron. Steam was generated by two coal-stoked boilers which were placed fore and aft in the hold of the vessel. The vessel had a cruising speed of somewhat under 10 knots and consumed a little over 100 pounds of coal per mile at this speed.

Her hull statistics were as follows:

The vessel was provided throughout with electric lights—it is said that it was the first government vessel to be so equipped. The dynamo was designed by Mr. Edison who selected a particularly fine steam engine manufactured by Armington & Sims of Providence, Rhode Island, to drive it. The dynamo generated 51 volts and a current for 120 lamps.

Edison electric lamps also were used for underwater observation of marine organisms at night and for attracting fish and other animals to night light stations. The deep-sea cable used for the light was 940 feet long. 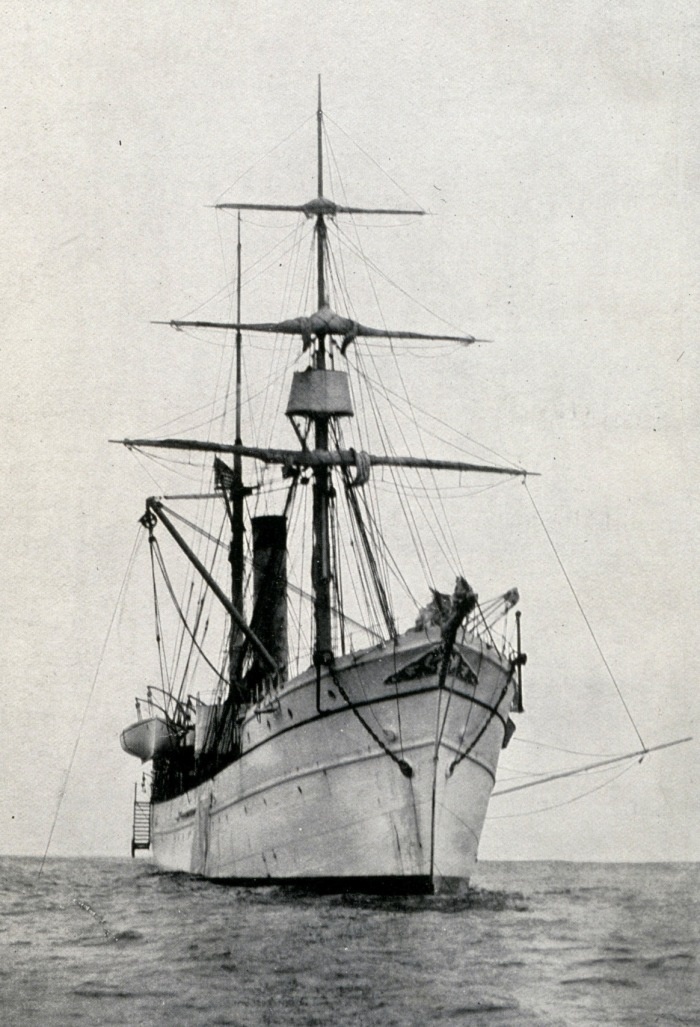 The bow of the first Albatross.

The vessel was especially designed for dredging and the collection of bottom samples and animals at all depths. She had two well equipped large laboratories for the preservation and study of biological materials and the chemical analyses of water samples. One laboratory on the main deck was 14 feet long and occupied the entire width of the deck house. Another laboratory on the deck below was 20 feet long and equipped with a photographic darkroom and a chemical laboratory.

The Albatross carried five boats: a Herreshoff Steam Cutter, a steam gig, a seine boat, a whale boat, and a dinghy. The 26-foot cutter seated eight people, was powered with a 16-horse-power steam engine, and could make eight knots, but it was also provided with sliding gunter masts and sails, schooner rigged. Her bunkers held 1000 pounds of coal.

The steam gig was 25 feet long, powered with 7-1/2 horse power engine and was generally lighter than the cutter. It had a speed of seven knots and seated seven persons. A peculiar feature of the boat was the location of the propeller under the bottom, about half the length from the stern. This prevented racing in heavy seas and made her performance in a sea-way remarkable.

Since the Albatross was especially designed for deep-sea dredging, the dredging equipment was one of her most interesting features. She carried 4,500 fathoms of 3/8-inch galvanized wire rope. The main dredging winch was on the main deck, but the wire was stored on a reel on the deck below. The wire rope from the dredge passed over the dredging block at the end of the dredging boom, then under a sheave in the heel of the boom, then upward and over a block suspended from a special rubber accumulator, and then to the central gypsy head of the main dredging winch.

After leaving the dredging winch the wire was passed below deck and lead under a governor, then to a leading block forward of the storage winch, and finally back to the reel of this winch. Through the action of the governor, uniform tension was maintained on the rope, compensating for the surging on the dredging winch. A level wind distributed the rope evenly on the storage reel.

Deep soundings were made with a Sigsbee Sounding Machine powered by a Bacon one-cylinder steam engine. It could reel in the sounding wire at the rate of 100 fathoms per minute. A Tanner sounding machine was used in depths of less than 200 fathoms and for navigational purposes.

Subsurface samples of water were collected with a Sigsbee water bottle (then called a water-specimen cup) and an improved bottle invented by Kidder, Flint, and Tanner. Temperatures were taken with Negretti and Zambra deep-sea thermometers. Sea water densities were measured by Helgard's ocean salinometer.

The Albatross was built as a result of discoveries made by the Fish Commission vessel Flsh Hawk in New England waters and the first five years of the Albatross' investigations were confined to the waters of the Atlantic Shelf from Cape Hatteras to Newfoundland. After the trial runs in the winter of 1882-83 she made her first scientific cruise in the summer of 1883 from April to November, running from Washington to Woods Hole and return, but investigating the fishes and bottom in a wide area of the coastal shelf and Gulf Stream. On this cruise she began amassing what was destined to become one of the greatest collections of marine organisms ever made by a single vessel. Innumerable publications have appeared based on the collections of this pioneer vessel.

From 1884 to 1887 she continued work in the Northwest Atlantic and in the Caribbean, making intensive dredging surveys and hydrographic stations. In March 1887 she was sent to the Pacific to investigate the fisheries of Alaska. She worked in these waters for three years investigating the fishery resources and fishing grounds of the Northeastern Pacific and Bering Sea, and in conducting hydrographic work. She was assigned particularly to the study of salmon, the Pribilof Islands' seal herds, and halibut.

In 1891 the Albatross made a special expedition to the tropical Pacific off the west coast of Mexico, Central America, and the Galapagos Islands under the direction of Alexander Agassiz of Harvard University. Many of the collections of this and later cruises under Professor Agassiz's direction were deposited in the Museum of Comparative Zoology of Harvard University.

That same winter she surveyed the ocean bottom between San Francisco and Hawaii to determine the best route for a submarine telegraph cable to the Islands. For the next several years she was occupied with Alaskan fishery investigations including continued study of the Pribilof Islands' fur seals, studying their pelagic life as well as the rookeries on the islands. She even became involved in enforcement work after the fur seals came under international regulations.

Interspersed with the Alaskan duties were numerous biological surveys conducted in various areas of the west coast of the Americas: a survey of San Diego Bay in 1894, Puget Sound salmon fisheries in 1896-97, halibut surveys, and a systematic survey of all salmon streams in 1897.

In 1898, during the war with Spain, she was detailed to the Navy. Her dredging and collecting equipment was stored in Mare Island Navy Yard and alterations made to her deck house And bunkers

The second Agassiz-Albatross expedition was conducted in 1899-1900. During this cruise the Albatross made collections over a wide area of the South Seas and Japan, adding enormously to our knowledge of the flora and fauna of the Pacific. In the period 1900-04, surveys were made along the West Coast, in Hawaii, and Mexico under the direction of a number of scientists from Stanford University and the University of California, including David Starr Jordan, Barton Warren Evermann, Walter K. Fisher, Harold Heath, and C. A. Kofoid.

The third Agassiz expedition (1904-05) took a number of scientists down the west coast of South America to Galapagos, Easter, and Gambier Islands.

"The 1906 cruise of the United States Fisheries steamer Albatross had for its especial object the investigation of the fish and fisheries of the Japanese seas, where the ship spent most of the time. The journey out was made by way of the Aleutian Islands, at several of which we stopped, Petropaulski, Kamchatka, and the Kuril islands. We returned by way of Honolulu. As the purpose of the expedition was the investigation of fish and marine invertebrates, and the ship was usually occupied in work offshore, my opportunities for collecting birds were rather limited, especially as my time was largely taken up by my duties in connection with the marine work, as the representative of the Bureau of Fisheries."

In 1907 - 10 the Albatross made her famous Philippine expedition which resulted in a wealth of information on the fishery and aquatic resources of these fascinating islands. This expedition was under the personal direction of Hugh M. Smith, Deputy Commissioner of Fisheries. F.M. Chamberlain was naturalist on board. Others in the scientific party included such well known biologists as H.C. Fasset, Lewis L. Radcliffe, Paul Bartch, Albert L. Barrows, Alvin Seale, and Roy Chapman Andrews.

After this great expedition the vessel returned to Alaskan studies and surveys of the West Coast. During the years 1912-14 she made an intensive survey of San Francisco Bay which resulted in a classical monograph of the area.

From then until the First World War she continued dredging and hydrographic surveys along the West Coast. During the war years, 1917-19, she was placed under control of the Navy and transferred from the West Coast to Guantanamo, Cuba, for patrol duty in the Caribbean and Gulf of Mexico.

After the war she returned to research in the North Atlantic, having been away for over 30 years. In 1919 she worked in the Gulf of Mexico in the environs of Cuba and off the South Atlantic coast. W.W. Welch was in charge with E.P. Rankin as ship's naturalist. In 1920 she surveyed the Gulf of Maine under the direction of Henry B. Bigelow, conducting hydrographic and biological investigations. This was the last scientific trip. In 1921 she returned to Woods Hole, the center of the Commission's research in the North Atlantic, where she was decommissioned on October 29.

The vast collections in the museums of this country, and the library of scientific papers that resulted from her cruises substantiate the fame this vessel acquired in all scientific circles of the world.