November Takes a Bite Out of 'the Blob'

Warm expanse that heated up West Coast waters is beaten, but not yet broken.

The so-called “blob” of infamous warm ocean waters that has gripped the West Coast and shaken up its marine ecosystems in the past two years is battered, but not dead yet, NOAA scientists report.

Strong winds blowing south from Alaska toward California dominated the West Coast through much of November, bringing cold air and some new upwelling of deep, cold water that weakened the warm patches that had long made up the blob, said Nathan Mantua, leader of the Landscape Ecology Team at NOAA Fisheries’ Southwest Fisheries Science Center in Santa Cruz, California. Patches of ocean that had been as much as 2 to 3 degrees C warmer than average in October have now dropped sharply to around 0.5 to 1.5 degrees C above average. Some areas along the Northern California Coast have even dropped to slightly below average temperatures for this time of year, he said.

Sea surface temperature maps from early November and early December illustrate decline of the large patches of warm water off the West Coast that have become known as “the blob.” The maps chart the difference between current and average sea surface temper

The blob has become one of the best-known temporary features of the world’s oceans, a big red expanse on temperature maps that has earned headlines in the New York Times and other outlets around the world. It has also become one of the hottest topics in climatology and oceanography, with scientists looking for possible links to climate change and the California drought; shifting distributions of marine species; and the unprecedented harmful algal bloom that has encompassed the West Coast, shutting down crabbing and clamming for months.

The one main exception to the blob’s decline is a narrow band of still-warm water along the coast from Southern California to San Francisco that remains about 3 degrees C above normal for this time of year. But the band may also be an early signal of the arrival of El Niño-related ocean currents, which are expected to cause more warming along the Pacific Coast in the next few months, Mantua said. 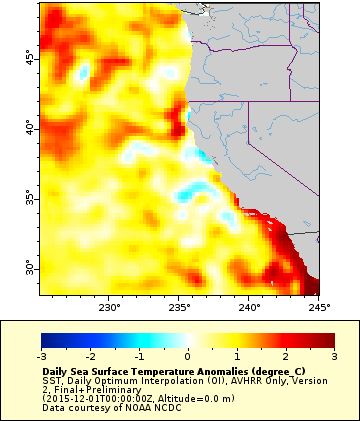 A close-up of sea surface temperatures off the West Coast, with red illustrating areas warmer than average and blue representing areas below average.

Research scientist Nick Bond of the NOAA Joint Institute for the Study of the Atmosphere and Ocean at the University of Washington originally coined the term, “the blob,” to describe the warm expanse. He said climate models agree the strip of warm water will remain along the West Coast, perhaps helping the blob hang on. He figures that the conditions might continue “well into 2016, and be of great enough magnitude to matter to marine ecosystems. How much is the big question.”

“Unusually warm temperatures still dominate the Pacific between Hawaii and the West Coast, but the amount of warmth is lower now than it has been for most of the past two years,” Mantua said. “As we get into the winter months, the expected El Niño influence on North Pacific weather and ocean currents includes more dramatic changes in West Coast ocean temperatures that will likely include coastal warming and offshore cooling.”

Below are the most recent sea surface temperature anomaly maps for the U.S. West Coast and the Northeast Pacific. These images are generated live from a data server, so they make take a few seconds to display. 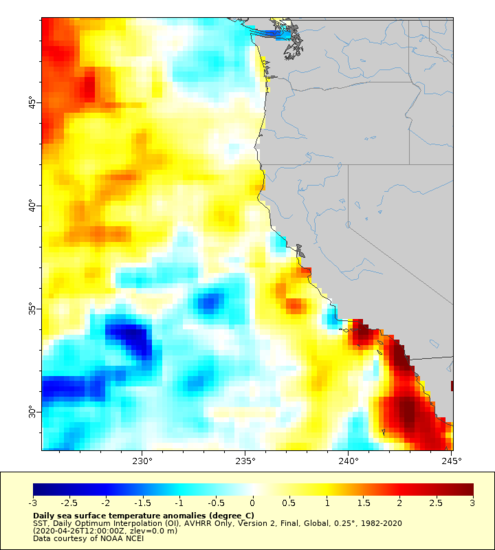 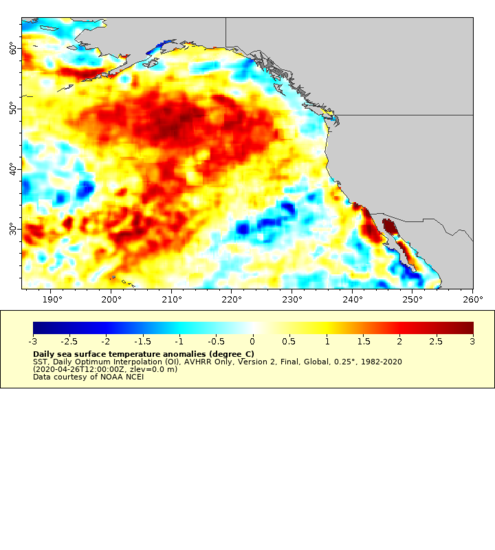