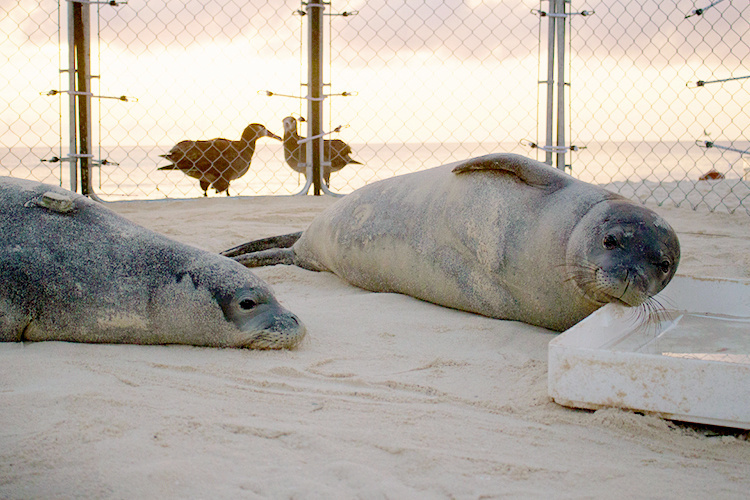 Two rehabilitated juvenile monk seals rest in their shoreline pen at Lisianski Islands. Seals are held in pens for 1-4 days when returned to the wild to help them acclimate to their environment after a long rehabilitation and transport.

On April 14, 2016, after nearly 7 months of rehabilitation at the Marine Mammal Center's Ke Kai Ola hospital on the Island of Hawaiʻi, seven female Hawaiian monk seal juveniles embarked on a journey home.

They boarded a Coast Guard C-130 Hercules airplane and were airlifted to Ford Island on Oʻahu, where they spent the next 48 hours in NOAA Fisheries' holding tanks. On April 17, they were placed aboard the NOAA ship Hiʻialakai for a three-to-ten-day return trip to the Northwestern Hawaiian Islands (NWHI).

The once-malnourished, now-healthy seals eventually arrived at their respective islands safely: Moʻo, Mahina, and Amaʻama at French Frigate Shoals on April 20; Kilo at Laysan on April 23; Neva and Puka at Lisianski on April 24; and Enaʻena at Kure on April 28. They then spent a few days in shoreline holding pens for a "soft release," in which they became acclimated to being in the open environment again before fully returning to the wild.

This transport of seven Hawaiian monk seals is the largest single transport ever attempted for the species. With a total of 15 seals now successfully rehabilitated and returned to the wild since 2014, this landmark effort is the culmination of a strong partnership between NOAA, the Marine Mammal Center, U.S. Coast Guard and local volunteers.

In the following Q&A session, David Schofield, NOAA Fisheries marine mammal response program coordinator for the Pacific Islands Region, provides an update on the seals and discusses their journey home.

Were there any issues fitting so many seals on the ship?

In the past, only a few rehabilitated Hawaiian monk seals had been transported on NOAA ships at once. This transport, however, is historic because a whopping seven seals were onboard a single NOAA ship. How did that work out?

There's plenty of space for the seals on the ship. But there's a lot of other gear on there, too. They did have to calculate every square foot of gear and supplies that was on the ship, because they had researchers who spend the summer conducting monk seal population research and response interventions, if necessary. They were going to the [NWHI] and they were taking supplies like tents food, water, generators, and seal research and response equipment. So they did have to calculate extra deck space for those seals, but they, of course, made that a priority. 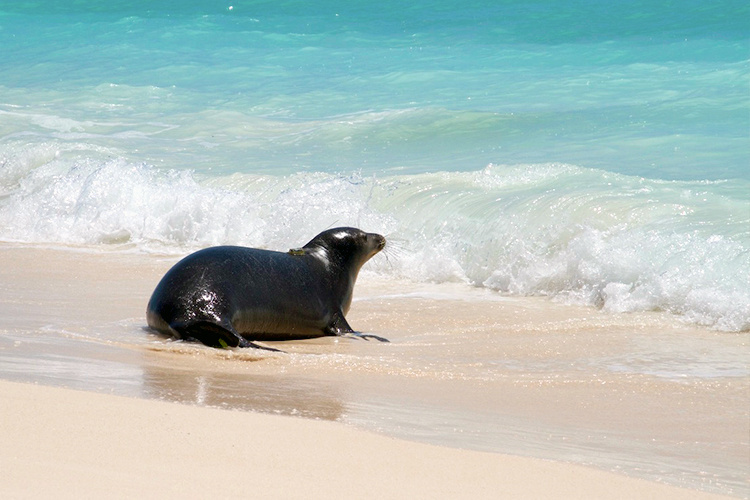 A monk seal being released back to the wild.

Why wasn't Kilo returned to Niʻihau as planned?

Originally, the plan was to return one of the seals Kilo to Niʻihau, where she was born, and the rest of the seals to their respective homes in the NWHI. But all of the seals were actually returned to the NWHI. What happened?

They could not release Kilo to Niʻihau because of the weather they couldn't get ashore, and they didn't want to wait an extra day because there were so many things tied to their schedule. They had planned ahead of time that if they missed the window to stop at Niʻihau (to do surveys and unload Kilo) because of the weather, they would just keep going. They couldn't wait for one seal because they had another six seals to return home and they felt that Kilo would do well on Laysan Island.

What determines how long the seals spend in soft release?

Moʻo, Mahina, Amaʻama, Kilo, Neva, and Puka all spent up to 4 days in their soft release pens, but Enaʻena left her pen after a single day. What factors affect how long they spend in soft release?

Seals may spend longer or shorter periods of time in soft release based on the animal caregiver's observations of the seal's behavior, weather conditions, or the ability to maintain the pen. We've had pens just bowled over by the surface waves. We've also had seals release themselves from the soft release, saying, "I'm done with this," and they lift up the pen and 'zoom

What information do the satellite tags provide?

All seals got flipper tagged, which is for the purpose of what we call "mark-recapture." It's so that you can identify them again in the future. Some seals had satellite tags placed on their backs which give information about location and diving behavior.

If the tagging data shows the seal going back and forth from shore, and then the tag shuts off for a certain period of time with the last known location on land, then that shows normal foraging and then hauling out and sleeping. The salt-water switch on the tag will click off when the animal is out of the water–so when it goes to sleep, the tag will go to sleep, and when it goes back in, the tag will turn back on.

Satellite tagging shows us movement patterns; and if there's dive data, to show if they're diving at depth. But then if you have a seal that has a track that goes way off into the sea and then all of sudden a couple days later there's nothing, one might surmise that that the seal maybe did not survive—this is a very possible occurrence.

How often is the tag data monitored?

It's monitored on a daily to every-other-day basis post-release until the tags fall off, which will be 6 months to a year.

This effort brings us up to 15 of these rehabilitations. This type of effort—of bringing malnourished seals from the Northwestern Hawaiian Islands to the main islands, fattening them up, and putting them back up—is continuously evaluated; therefore, we need to be able to demonstrate the post-release survival for the continuation of the program as a recovery tool. 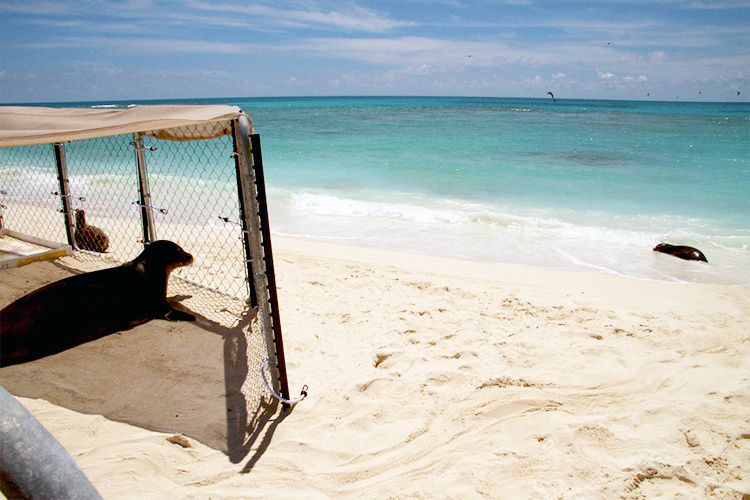 Basically, this is a recovery tool and we're measuring not only the short-term success of their release, but what do they do for the rest of their lives? Fifteen years from now, for example, will we have seen that each one of these successfully released females produced 5, 6, 7, 8 pups? How much does that improve the population size? This effort has the potential to greatly enhance the size and survivability of the population.

Do rehabilitated seals have any issues transitioning back to life in the wild?

Are there typically any issues with getting the animals to transition back to wild life, or do they normally just go right into it and they're fine?

The majority of seals released will acclimate and be reintroduced with no problem. There are some seals that sometimes will not do well, but it's the minority, and a very low percentage of them don't readjust.

The people that are managing the rehabilitation of these seals—everyone from the volunteers, to the veterinarians, to the paid staff of the Ke Kai Ola facility—are experts in their field and have been doing this work on the mainland for over 40 years, and all are specially trained and do everything in their powers to try to keep the animals wild. So there's no eye contact, and they're not hand-feeding them. They're trying to make the feeding times variable so the seals are not hearing the door open and knowing the fish is coming the same time every day.

There's probably some level of conditioning that happens in a rehabilitation setting because it's not the wild, so they might respond to things like people coming in, but there is a one-way glass so the seals can't see the Ke Kai Ola caregivers. Everybody is told to keep quiet and make no eye contact. If they have to go in to clean the enclosures, a minimal amount of time is spent in there and there's no gratuitous attention, and no interaction or playing with the seals—they are doing everything in their power to keep the seals wild.

Some aspect of this is that these seals are somewhat hardwired, if you will, from an instinctual standpoint to understand that there's a context of things in the wild. I've worked for years in marine mammal rehabilitation before I took this job as a federal natural resources manager specializing in marine mammals, and it seemed to be easier to reintroduce young animals because their early behavioral development would have been novel and in flux. It's part of their early-stage learning and then once they get to a certain age, they start to realize the norms of their environment, and that transitions from rearing period, to weaning period, to post-weaning period, and then at some point in time they turn into a seal. And they have to deal with seal things, like finding fish, avoiding large predators, and seeking mates—being a seal.

So there's some hardwiring that we think these animals maintain and that we rely on, and then hopefully their natural instincts kick in. The animals are also offered live fish—to rekindle that instinct that, "There's something moving so I'm going to go chase it," and that kind of a thing.

What dangers do the seals face?

In addition to those threats, the dangers that they may face is that there is the potential that the seals can become too acclimated to the rehabilitation setting and not make that jump that I described earlier to being a wild seal. That's always in the back of our minds, and again that's why we work so hard to try to keep them wild. The other dangers are just the dangers of the wild that all wildlife face—it's a jungle out there, as it were.

What is the status of the seven seals now?

Is there anything you can say about the status of the seals now?

They've made the trip. In my world, we talk about transitions for the animal: They went from being airlifted, to being put on a ship, to being put on a smaller boat, to a shoreline pen, and then to being released. So they did well throughout all of that and they ate really well and behaved normally. They've made it through those transitions, so that's quite a lot of milestones. We released Moʻo, Mahina, and Amaʻama from their holding release pens on French Frigate Shoals on April 24; Kilo on Laysan on April 27; Neva and Puka on Lisianski on April 28; and Enaʻena on Kure on April 29. We are now waiting on tracking data and reports from the field.