Scientists have discovered the source of the "bio-duck" sound, a strange noise that has mystified scientists and submarine captains in the ocean off Antarctica for decades.

Rich Press: In the Southern Ocean around Antarctica, there's this mysterious sound that reverberates under water all through the winter. Both the military and scientists have been recording what they call the "bio-duck" sound for decades. But for all these years, no one knew who or what was making it. Now an international team of scientists has solved the mystery of the bio-duck sound, and the results were published today in the journal, Biology Letters.

It turns out that Antarctic minke whales are the ones making all the noise, and this discovery has radically changed our view of that species.

Over the years, Antarctic minke whales have made news headlines. They’re the species hunted and killed by Japanese whalers in the Southern Ocean with the stated goal of scientific research. The new discovery about this same species of whale shows how much we can learn about these animals just by observing them in their environment.

Sofie Van Parijs: These calls are called the "bio-duck." It's just a name they were given a long time ago by some submarine captain, which I guess, he thought it sounded like a duck.

Rich Press: That's Sofie Van Parijs, a marine biologist with NOAA Fisheries and one of the co-authors of the study.

Sofie Van Parijs: And these are calls that have been recorded throughout all the Antarctic over the past 40 years.

Rich Press: Denise Risch is also a marine biologist with NOAA Fisheries, and she's the lead author of the study.

Denise Risch: They heard this sound, which is a low-frequency pulse of sound which is very regular. It almost sounds mechanical. So if you first hear it, you wouldn't necessarily think it's an animal, but it's very loud and very pervasive. You could hear it in the wintertime across the Southern Ocean.

Rich Press: Here's what the bio-duck sound sounds like...

Rich Press: Part of the problem was that no one thought there were minke whales down there in wintertime, since they're known to migrate north to warmer waters before then. But the clue to finally solving the mystery was uncovered by researchers from Duke University, who succeeded for the first time in attaching suction cup tags to Antarctic minke whales, tagging two of them. For as long as those suction cup tags hang on, the tags record information on the animal's depth, roll, and heading. And they also have microphones attached to record both the sounds the animals hear and the sounds they're making.

Denise Risch: You can attach these tags to an animal. They stay on for a couple of hours, and then they can be programmed to release at a certain time, and you can recover the tag and look at the data record.

Rich Press: When Risch received the tag data from the field team, she extracted the sounds made by the whales that were wearing the tags and also by other minke whales nearby.

Personally, I was surprised that, until now, no one knew for sure what sounds the Antarctic minke whales were making. But Van Parijs explained that minke whales in general produce some very strange and unexpected sounds.

Sofie Van Parijs: Minkes are unusual because they produce the most bizarre sounds. So, here off the East Coast of the U.S. they have these pulsed sounds, which are a bizarre type of sound to produce for such a small whale. And then in the Pacific they produce a sound described as a "boing." And this is kind of what it sounds like... It's this boinging noise they produce, so it's something completely different than what they do here in the western Atlantic.

And then you've got the dwarf minke whales who are off the east coast of Australia, that produce this Star Wars sound, and it literally does sound like this electronic zip-zang laser. So minke whales produce really unexpected noises, and the bio-duck is the same; it's another one of these just like "why would an animal produce this sound?"

Rich Press: Scientists have long used sound to study marine mammals because sound travels really well under water and it carries a lot of information. After all, that's why marine mammals use sound themselves. But with new acoustic technologies, scientists are using sound to study marine mammals in new ways. For instance, they now often deploy underwater listening devices that record passing marine mammals, allowing them to identify the animals by the unique call type and estimate their distribution and abundance. Scientists can leave those devices out during the whole Antarctic winter, allowing them to get observations in a time and place that's otherwise completely inaccessible to humans.

Sofie Van Parijs: In terms of understanding minke whale biology and just also their abundance, how many of them there are and where they go, this is really important.

Rich Press: Now that scientists know that the bio-duck sound is produced by Antarctic minke whales, they've started to go through the decades of archived recordings to see where and when minke whales appear. And they've found that, to their surprise, not all minkes migrate. Many of them over-winter in the Antarctic, deep within the pack ice. We just never knew they were there because, well, very few humans are ever down there in the winter to observe them.

Sofie Van Parijs: It's just showing how our preconceived ideas of what these animals do is wrong. They don't just do these standard behaviors that we think they do. Frequently, we think they do that because that's what we've been able to observe and, from that, we've made these assumptions. And they are correct to a certain extent, but they definitely don't tell the whole story. And what acoustics is able to do is to give us a much better view of the whole picture.

Rich Press: Using acoustics to study whales also has the advantage of not injuring or killing the animals that are being studied. Along with other non-lethal techniques, like taking skin samples for DNA analysis, scientists can learn a great deal about these animals without resorting to what they call lethal sampling.

Denise Risch: We now have a really powerful new tool in our toolbox to study this species. Using acoustics, we really don't need lethal sampling anymore.

Rich Press: Studying these animals as living creatures within their environment also opens up new avenues of scientific research. For instance, now that scientists know that some minke whales overwinter in the Antarctic, they can search for them in the historic archive of sound recordings. That will shed light on how the distribution and abundance of minke whales in the Southern Ocean has changed over the years, and offer insights into how climate change is driving changes in the Antarctic ecosystem.

As always, you can get more information about this story on our website. That's www.fisheries.noaa.gov/podcasts. There you'll find a link to the research paper online, photos of the minkes that were tagged for this research, and also a link to a NOAA website where you can listen to and download sounds from all kinds of marine mammals and other creatures. 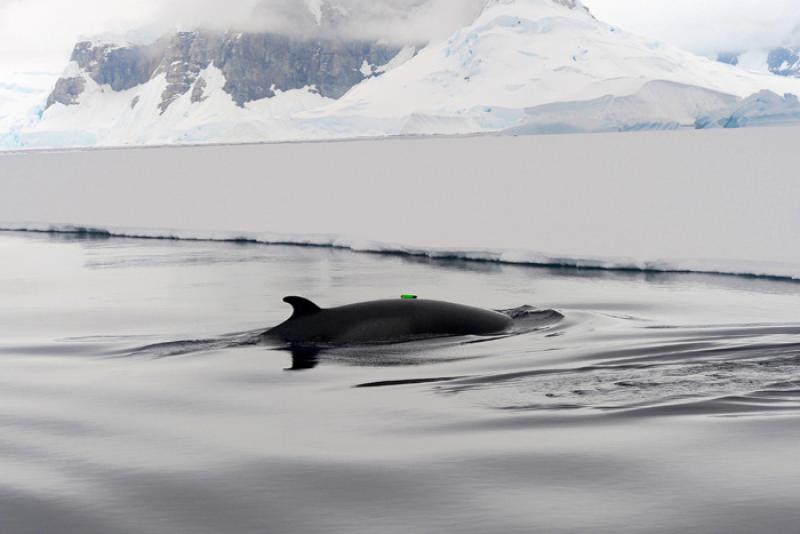 In the Southern Ocean around Antarctica, there's a mysterious sound that reverberates underwater all through the winter. Both the military and scientists have been recording what they call the “bio-duck” sound for decades. But for all these years no one knew who—or what—was making it.

Now an international team of scientists has solved the mystery of the bio-duck sound, and their results were published today in the journal Biology Letters. It turns out that Antarctic minke whales are the ones making all the noise, and this discovery radically changes our view of that species.

Over the years, Antarctic minke whales have made news headlines as the species hunted and killed by Japanese whalers in the Southern Ocean with the stated goal of scientific research. The new discovery about this same species of whale shows how much we can learn about these animals just by observing them in their environment.

Note: The audio clip of minke whales included in this podcast was provided by co-authors Ilse Van Opzeeland and Lars Kindermann, both of the Alfred-Wegener Institute for Polar and Marine Research.

K-12 students showed us the beauty of sharing the shore and sea with marine wildlife in the 2022 Share the Shore & Sea Youth Art Contest. “Whale watching” by Asa P., Grade 8, Hawai‘i