How will we manage fish populations as the climate changes? NOAA Fisheries biologist John Manderson is working on one small piece of the puzzle.

Rich Press: However fast you think climate change is happening on land, it’s happening even faster in the ocean, at least in terms of how animals are responding to it.

John Manderson: The effects of climate on the distribution of animals in the ocean is happening ten times faster in the ocean than it is on land.

Rich Press: That’s John Manderson, a biologist with NOAA Fisheries. Manderson is based in the New England region, and here he’s speaking about the part of the Atlantic he works in.

Rich Press: These changes present a big challenge to fisheries management, because they can affect our estimates of fish populations. That’s because if the distribution of fish changes, if the fish are no longer where they used to be, then we might miss some of them in our surveys.

John Manderson: One of the things that’s affecting these assessments is the fact that the habitat of these animals is changing its distribution as the climate changes, so the animals are shifting north and they’re changing their migration patterns to be earlier or later in time, and the surveys are fixed in space and time. And so essentially, the habitat is moving underneath the surveys.

Rich Press: For most species, these shifts in habitat would be picked up by the survey, so it wouldn’t be a problem, but for when it is a problem, Manderson is working on a way to account for those shifts. For his first case, he’s working on butterfish. Butterfish is a bycatch species in the Loligo squid fishery. Squid fishermen don’t target them, but butterfish do sometimes end up in their nets. Because they’re important as prey for tuna and other valuable species, NOAA surveys butterfish every year and puts a limit on how many can be caught by squid fishermen.

To account for shifting habitat in the butterfish assessment, Manderson first has to understand what butterfish habitat is. And for that, he’s turned to an expert.
Chris Roebuck: My name is Chris Roebuck, and I’m a fisherman from Point Judith. I fish for scallops, Loligo squid, and I used to fish for groundfish. Climate change is happening, no doubt about it. The species are moving because the habitat’s dependent on temperature, and they like a specific temperature, and that’s where they wanna be.

Rich Press: Now, Chris Roebuck, he knows a lot about butterfish habitat, because he’s a squid fisherman, and he spends hundreds of days a year at sea trying to avoid butterfish. So, Roebuck brought Manderson out on his boat and he did the opposite of what he usually does. The two of them went looking for butterfish.

Chris Roebuck: So, we went out, and what we did is we caught butterfish inside of the area that they had surveyed, and we caught butterfish outside of the area that they had surveyed. After 22 hours of being up, he couldn’t believe it, so he said, “I gotta lay down for a minute.” He went down and got in his bunk, and he came back 15 minutes later with a coffee, and he goes, “Man, I really needed a nap. How long was I out for?” I said, “About 15 minutes!” The guy’s a madman for work.

John Manderson: By talking with him and going out there with him, I have access to a guy who spends like 100 days a year out there and has done that for twenty years. And not only that, I have somebody who understands in a very deep way how the fluid there is structured and the relationship between the animals and that fluid.

Rich Press: Manderson spent a lot of time on Chris Roebuck’s boat, and, with Roebuck’s help, he’s built a model of butterfish habitat. That model is based in part on Roebuck’s years of experience on the water. It’s also based on data from a group of fishermen, including Roebuck, who do cooperative research with the scientists. That group has put temperature and depth sensors on their nets, so every time they bring in a haul of fish, they know the exact bottom water temperature where the fish were caught.

Rich Press: In other words, Manderson is mapping butterfish habitat based on bottom water temperatures, and he’ll be able to see how that habitat shifts as temperatures change. But it’s not like there are a million thermometers at the bottom of the Atlantic sending back temperature data, so for that piece of the puzzle, Manderson has teamed up with a group of physical oceanographers at Rutgers University that are experts in ocean modeling. That group can hindcast bottom water temperatures back to the time of the last butterfish survey, and with that, Manderson can account for year-to-year shifts in butterfish habitat. Here’s how...

John Manderson: We’re gonna take the model, the habitat model that we made with Chris, and we’re gonna reduce it down to its bare bones and talk about temperature, just make it out of temperature. And we’re gonna estimate how much of the total amount of temperature-defined habitat for butterfish you sampled during our surveys. And I’m gonna turn that into a number that we’re gonna include to scale the population.

Rich Press: In other words, if you know what you missed, then you can account for that bias. What Manderson’s proposing is not a wholesale change to the assessment method. Really, it’s a matter of fine-tuning. To make sure all the parts fit together, Manderson is working closely with the scientists who run the butterfish assessment, and they’ve incorporated some of these techniques into their population models. Paul Rago is one of those stock-assessment scientists, and he said that people have been working on incorporating environmental data into assessments for decades, but it’s becoming more of a reality today in part thanks to new technology and increased computing power.

Paul Rago: Fine-scale temporal and spatial information on resource abundance and fishing activity will certainly play a prominent role in stock assessments in the future. That, of course, creates a huge demand for timely information, and I think the infrastructure to support that, both from the acquisition and the processing side of things, is going to be a real critical need in the future.

Rich Press: But one critical source of information is the same as it’s always been, and it has nothing to do with technology or computer modeling. What it has to do with is old-fashioned communication. If we want to understand the habitat ecology of fish, then we need to work with fishermen.

John Manderson: The people who understand how those animals live in a fluid, better than anybody else, are fishermen. Nobody understands the habitat ecology of an animal better than its predator, and that guy is an incredible predator.

Rich Press: How do we manage fish populations in the face of a changing climate? Manderson, by working with fishermen, oceanographers and stock-assessment scientists, has proposed one potential solution. But the people you heard from today aren’t the only ones working on this problem. Researchers in many parts of the country are grappling with this issue as well. The world is changing quickly, and this story is just one example among many of how our science is changing with it.

As always, you can find more information about this story on our website. That’s www.fisheries.noaa.gov/podcasts. There you’ll find maps that show the survey area and how habitats are shifting within it.

Thanks for listening. Join us again next time for more stories about ocean life and ocean science. I’m Rich Press and you’re listening to On the Line.
[Music playing] 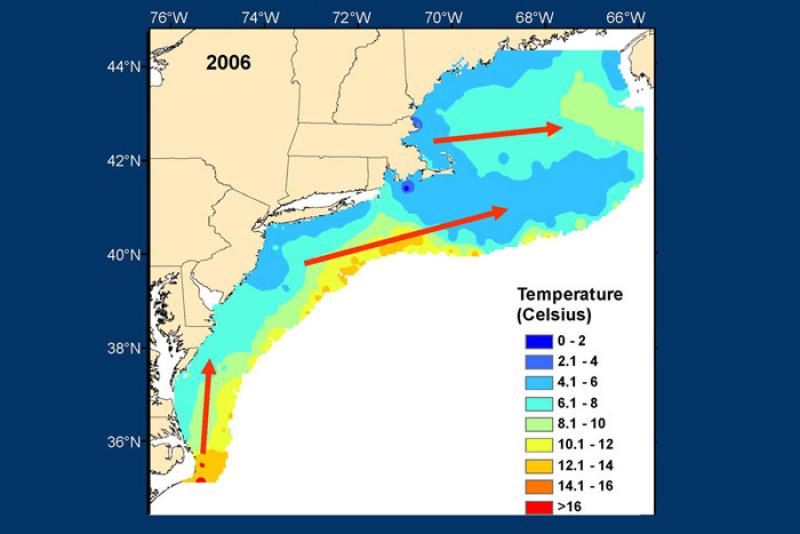 However fast you think climate change is happening on land, it’s happening even faster in the ocean. Marine species are particularly mobile, and they’re quickly moving toward the poles in order to stay cool as things heat up.

This poses a challenge to fisheries management because it has the potential to affect our estimates of fish populations. That’s because if the distribution of fish changes—if the fish are no longer where they used to be—then we might over- or undercount them in our surveys.

Most types of distribution shift would not affect population estimates because they’d be picked up by the survey. But for those cases where it could be a problem, our scientists are working on a solution.

John Manderson is a NOAA Fisheries biologist, and he’s working on the stock assessment for butterfish. By studying the habitat ecology of this species, Manderson hopes to map shifts in butterfish habitat caused by changing ocean temperatures. Those maps can then be used to fine tune estimates of butterfish abundance.

To do this, Manderson is working with physical oceanographers that model fine-scale changes in ocean temperatures. He’s also working with stock assessment scientists to find a way to incorporate his mathematical adjustment into their fish population models.

Perhaps most importantly, Manderson is working with fishermen. "Because no one understands the habitat ecology of an animal better than it's predator," he said.

Manderson and the scientists and fishermen he’s collaborating with aren’t the only ones working on this problem. All along our coasts, NOAA Fisheries scientists and their partners are developing ways to incorporate environmental data into stock assessments. The world is changing quickly, and this story is just one example among many of how our science is changing with it.

The ocean temperature models used in this research are created by MARACOOS. Other contributors include NOAA’s Northeast Cooperative Research Program, the NOAA Fisheries Habitat Assessment Improvement Plan, and the Mid-Atlantic Fishery Management Council.

Last updated by Office of Communications on September 08, 2021