Voices from the Fisheries: Danny Murphy

The Voices from the Fisheries series provides oral history interviews related to commercial, recreational, and subsistence fishing in the United States and its territories. This interview spotlights Danny Murphy, a commercial fisherman from Gloucester, Massachusetts. 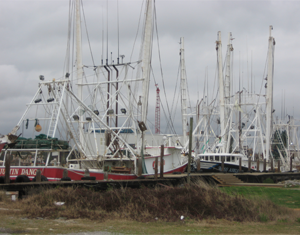 Abstract: Danny Murphy, 39, is a commercial fisherman out of Gloucester, Massachusetts. Mr. Murphy's father started tuna fishing later in his life, eventually owning a trawler which piqued perked his son's interest in fishing as a profession. Mr. Murphy began working on his father's trawler at around 16 years of age and would fish for groundfish and also dredge occasionally for scallops and sea urchins. Currently, Mr. Murphy owns a 36-foot trawler and fishes inshore for groundfish and scallops and is a member of Sector 2 in Gloucester. He joined a sector in the beginning; the common pool did not look appealing due to the perception that fisheries could close quickly once quota was used up. He has mixed feelings about sector-based management, pointing as a positive aspect to the flexibility to land fish in one big bunch if you are fishing and come across a lot of them. Mr. Murphy feels a negative about sectors is the leasing of fish and how larger vessels are able to lease from smaller boats; this has resulted, in his opinion, in larger boats from other ports fishing on inshore grounds that were traditionally fished exclusively by Gloucester-based small boats. He fears this pressure on the resource is affecting fish stocks and will put small boat operations out of business in his area.

DM: Um, my perspective, I think it's good for, if you make…if you're fishing you run into a bunch of fish you can take them home and sell them, it's good for that reason. I think it's bad if… I think the fish trading back and forth is a problem. I can lease my fish. I have a small boat with a small permit. I can lease my fish to a larger vessel. Before that we had Days at Sea and we could never, I couldn't lease my Days to a ninety-foot boat because the permits wouldn't match, but because now sectors, you know, now it's a quota and fish is a common currency, we can change fish back and forth, and I think negatively it's caused fishermen that haven't historically fished in a certain area, like my area is the Gulf of Maine, the inner, you know, inside Gulf of Maine, inshore, it's caused vessels that, you know, never fished the waters before to buy quota from the inshore Gulf of Maine and put it on their boats, and then fish exclusively in the Gulf of Maine now. I think it's really hurt the inshore bottom, in my opinion.

DM: I feel like there's a lot more stress, in the business, very stressful, just because it's, you know, you see these fish complete, three years ago I thought the codfish were completely rebuilt and now we can't find any, you know, it's a little stressful there. You try to…, you make decisions in your life that affect what, you know, you think things are going in the right direction and you buy a house, you buy a new truck, whatever, then next thing you know, guess what, there's no codfish around. So it's kind of stressful in that aspect, but yeah I can't say it's, you know, it's good in one way and bad in another. Financially things have been kind of the same only because I've been working harder at different things like scalloping, stuff like that, but, yeah, that's basically that.

Go to the full Voices collection.

Last updated by Office of Science and Technology on February 17, 2021