White Abalone, What Turns You On?

To save endangered white abalone, scientists are working to breed them in captivity. But first they have to figure out how to turn on white abalone.

White Abalone, What Turns You On?

Transcript: White Abalone, What Turns You On?

Rich Press: Imagine New England without lobster, or the Chesapeake Bay without blue crabs. Well, in California, abalone is an iconic local seafood. Unfortunately, this tasty mollusk has become scarce, mainly due to past decades of over fishing. In fact, the most prized of the abalones, the white abalone, is listed as endangered.

Kristin Aquilino: There are probably only a few thousand left in the wild.

Rich Press: That’s Kristin Aquilino, a biologist, whose post-doc research on white abalone is funded by NOAA Fisheries. She and many other scientists from NOAA Fisheries and elsewhere are working to bring white abalone back from the brink, but bringing back white abalone populations isn’t easy, in part, because of the way they reproduce.

Kristin Aquilino: The biggest problem is that abalone are broadcast spawners. They send their eggs and their sperm into the water column and the eggs and sperm have to find each other to create a baby abalone. The abalone that are left in the wild are so far apart from one another that it’s really, really unlikely for their gametes to find one another.

Rich Press: To save white abalone, scientists are raising them and trying to get them to reproduce in the lab. Dr. Aquilino runs the White Abalone Captive Breeding Program at the UC-Davis Bodega Marine Lab in Bodega Bay, California.

Kristin Aquilino: The goal is to produce enough in captivity that we can help recover the wild population. The great thing about abalone is that their native habitat is actually still relatively intact. It's not like we’re trying to restore a species for which their habitat is so degraded there’d be no place to put them. If we can make a bunch of white abalone and put them out there and get them to survive, they should do great.

Rich Press: That’s important not only because the species was a valuable seafood, but also because white abalone play an important role in the ecosystem. Without competition from abalone, urchin populations can grow unchecked and destroy kelp beds and kelp forests. To breed white abalone in captivity, first you have to get them to spawn, that is to release their eggs and sperm into the water. To encourage them, scientists put them in a solution of hydrogen peroxide.

Kristin Aquilino: Hydrogen peroxide creates free radicals in the water and we think that that’s the same chemical reaction or similar to the chemical reaction that happens when another abalone is spawning. So if you’re an abalone and you’re sensing these kinds of chemicals, you’re thinking, “Oh, you know, Betty over there is spawning. I better spawn too. I don’t want to miss the boat.”

Rich Press: Sounds easy enough, right? But the problem is the scientists can get the white abalone to spawn, but really, the animals, they’re just not that into it. They’re not in the mood. They spawn, but just barely.

Kristin Aquilino: In 2012, we had our first successful spawning in nearly a decade, and it occurred with two females spawning and one male spawning, the tiniest puff of sperm, like if we had blinked we would have missed it and it wouldn’t have been successful.

Rich Press: Aquilino thinks that the animals aren’t producing very many sperm and eggs in the lab, because they’re out of their natural element. In the wild, white abalone breed in springtime and something must happen a few months before then, some sort of environmental queue to tell the abalone, “Hey, time to get ready. Your big day is coming up.”

Kristin Aquilino: The animals that are in captivity are probably missing that environmental cues, and so one of our jobs as researchers is to try to figure out what really gets them to tick. What gets them to know, you know, spring is coming, we better put some energy into our gonads? It could be something like photoperiod, so in the late winter the days are getting longer. Maybe that’s a cue. It could be temperature. It could be diet. So those are some of the things that we’re experimenting with in our lab here.

Rich Press: The good news is that each year since 2012 the spawning has improved and this year they had a banner year. So Aquilino and her colleagues now have thousands of juvenile abalone, enough to start doing some experiments to find out what cues turn them on.

Kristin Aquilino: We have these really great clocks in our laboratory called astronomic clocks and they make the lights go on and off the exact same time the sun rises and sets in southern California. So our animals in the lab think they’re outside basically, and we’re actually trying to test if we have some of our animals on an accelerated photoperiod, instead of going forward one day in the day length, they go forward two days every 24 hours. Maybe we can trick them into reproducing more than once a year.

Rich Press: They’re also manipulating water temperatures in the lab, and feeding the abalone high protein diets. Meanwhile, the captive breeding program is just one piece of the puzzle. Other research partners, including NOAA’s Southwest Fisheries Science Center, are working to improve culture methods, doing genetic studies, and experimenting with techniques for releasing captive-reared abalone into the wild.

Kristin Aquilino: And I think there are a number of things that have happened that has allowed us to increase our success. One has been an incredible amount of collaboration among our partners.

Rich Press: Unfortunately, there are a lot of endangered species out there, and abalone might have a tough time competing for attention with famously charismatic species, like Chinook salmon, and sea turtles, and killer whales, but don’t judge white abalone too quickly.

Kristin Aquilino: When you look at an abalone in the wild or in the tank, all you really see at first is its shell. When I take people into the lab here and I show them the abalone, they don’t seem that impressed, but when I pry one off the side of the tank and show them that it has eyes and it moves, suddenly people go, “Oh, that’s kind of cute. I can relate to that animal, because it has eyes.” I agree that there are maybe some more charismatic endangered species, but I definitely connect to these animals and I think a lot of people do.

Rich Press: To find out more about white abalone restoration and about the research partners involved, check out our website. That’s www.fisheries.noaa.gov/podcasts. You’ll find some great photos and videos there as well. 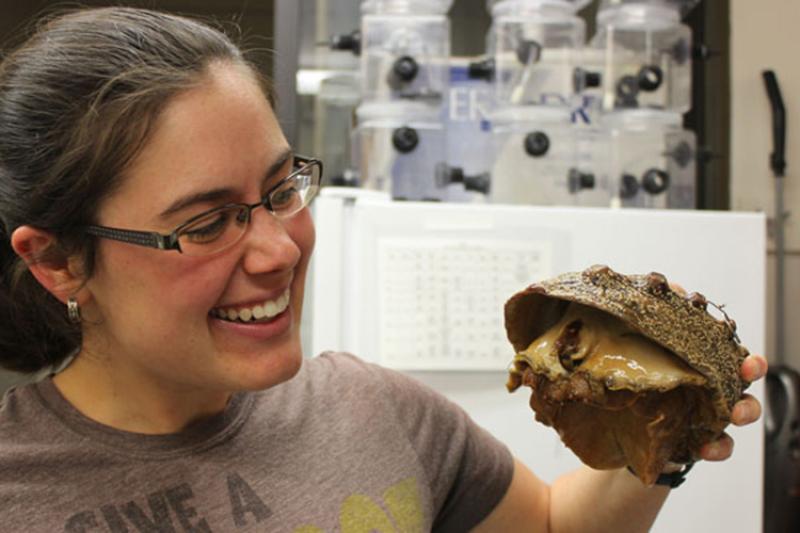 Imagine New England without lobster, or the Chesapeake Bay without blue crabs. Well, in California, abalone is an iconic local seafood. Unfortunately, this tasty mollusk has become scarce, mainly due to past decades of overfishing. The most prized of the abalones, the white abalone, is listed as endangered, and scientists from NOAA Fisheries and elsewhere are working to bring them back from the brink.

One of those scientists is Kristin Aquilino, who runs the white abalone captive breeding program at the UC Davis Bodega Marine Laboratory in Bodega Bay, California.

In this podcast, Aquilino describes the challenges of getting white abalone to breed in captivity. The biggest challenge: figuring out what turns them on.

Last updated by Office of Communications on February 12, 2021