A tale of wayward whales. 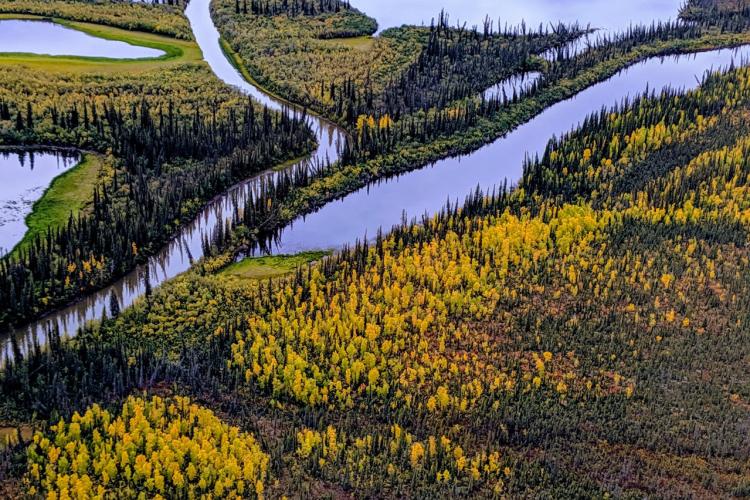 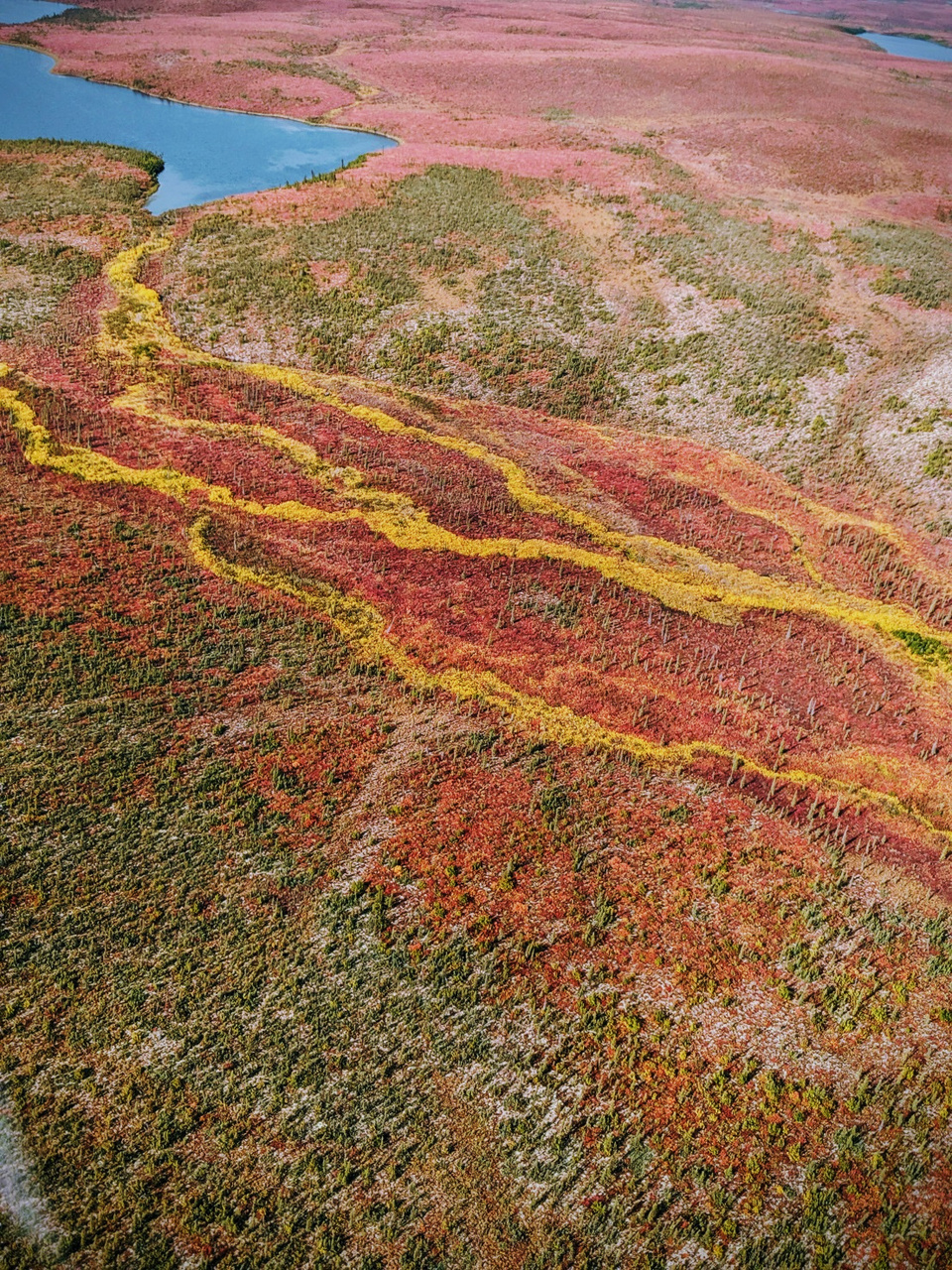 Fall color in the Alaska tundra.

For three weeks in August this year, our Aerial Surveys of Arctic Marine Mammals teams did something a little different. This year we were tasked to come up with an abundance estimate for the Bering-Chukchi-Beaufort population of bowhead whales. The best time and place to conduct aerial surveys for this stock is in the Beaufort Sea, where most of these bowhead whales feed in the summer months. After much planning and preparation over the last two years, our Chukchi Sea-based team relocated to Inuvik, Northwest Territories (NWT), Canada; our Alaskan Beaufort Sea-based team stayed in Deadhorse, Alaska; and we added a third team that split its time between Ulukhaktok, NWT, Canada to survey Amundsen Gulf, and Inuvik. In the days to come, there will be a blog about the bowheads we sighted. In the meantime, we want to share an unusual sighting of some unexpected visitors to the eastern Beaufort Sea.

The morning of August 21, 2019, began almost bright and warm after several days of bad to marginal weather stymied all three teams. Everyone was chomping at the bit to get airborne, and each team launched as soon as their planes were fueled and safety checks were made. In essence, we were all ready to “kick the tires and light the fires” to quote a famous movie!

Inuvik is a small town of about 3,000 in the Northwest Territories of Canada. It’s a bit inland so the transit out to the ocean takes us over stunning landscape. At this time of year, fall colors start to appear in the tundra. The landscape is ablaze with reds, oranges, yellows, and golds. Ribbons of dark green spruce and yellow birch trees intertwine. 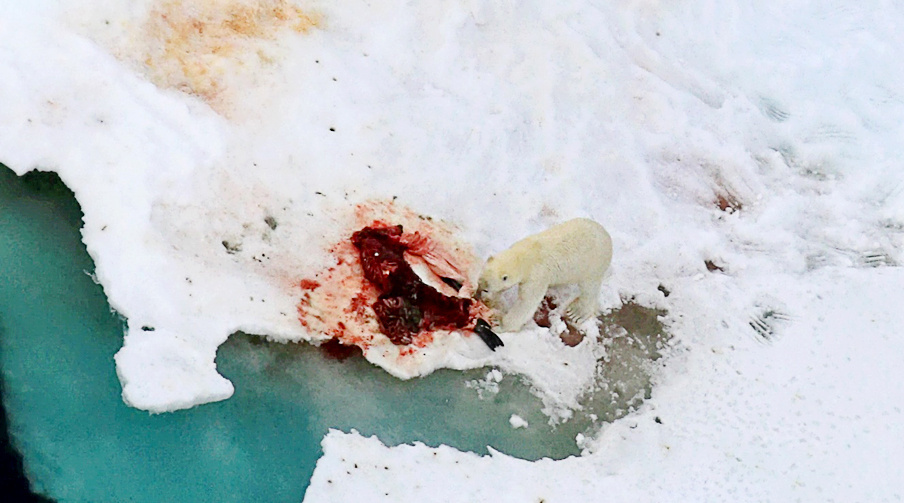 This image shows a polar bear at its kill site with a seal carcass.

Once each survey team reached its respective survey area for the day, all observers started looking for their main target, bowhead whales. In some areas, we encountered sea ice. On rare occasions when we fly over sea ice, we sight polar bear kill sites – sometimes with the polar bear still munching on its prey! Kill sites are few and far between. Additionally, although it may seem odd, kill sites are not easy to spot. Ice can be blindingly white on a sunny day and ice fields can be vast. For an observer flying over ice and water at about 115 knots, it is difficult to scan both the liquid and frozen habitats below. 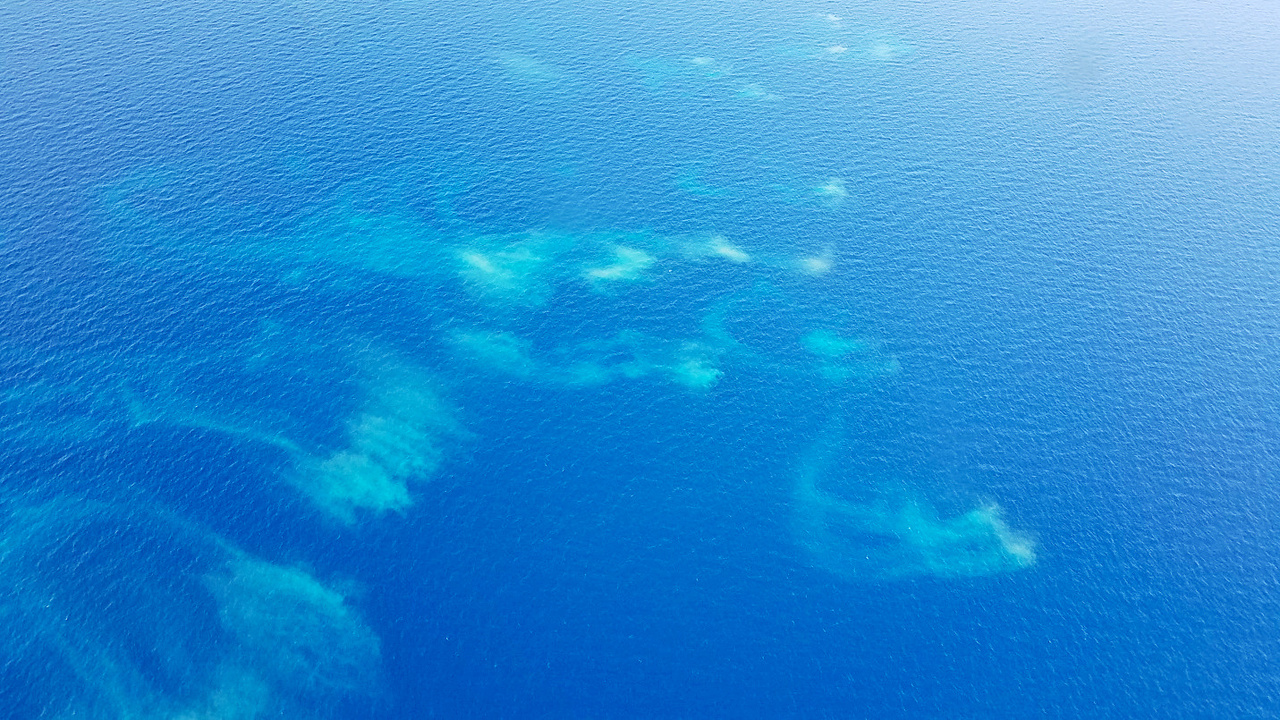 The mud plumes made by feeding gray whales in the Canadian Beaufort Sea.

Back over ice-free water, where we were gifted with clearing skies, sunny conditions, and amazing blue water, one team happened upon what looked like mud plumes. In the Chukchi Sea, we are familiar with these types of mud plumes, made predominantly by feeding gray whales. On this day we were cautious about getting too excited by these plumes. We were far from gray whale territory. It is quite rare to find gray whales in the Beaufort Sea. Bowhead whales are also known to be covered in mud that streams away as they surface. “Mark” called out an observer. “I have a gray whale”. What??? “Break left!” called out the team lead. Breaking from our transect, we circled back to the mud plumes and saw that, yes indeed, a gray whale was feeding in the Canadian waters beneath us.

After snapping photos to document our find, we headed back to the transect and continued on our survey. More gray whales feeding, more photos, more circling, and on and on it went. At the end of our transect, we headed east over to the next transect and found no gray whales feeding, even though we did see a few older mud plumes. However, on the next transect to the east, we found more mud plumes and more gray whales, including a calf! Wow! The team was giddy with excitement, “it was as if we had just discovered a new species,” according to one of our pilots. We may not have discovered a new species, but perhaps we discovered a new feeding area for gray whales. By the end of our survey that day we had a total of 15 gray whales, mostly feeding and a few just swimming in the area. 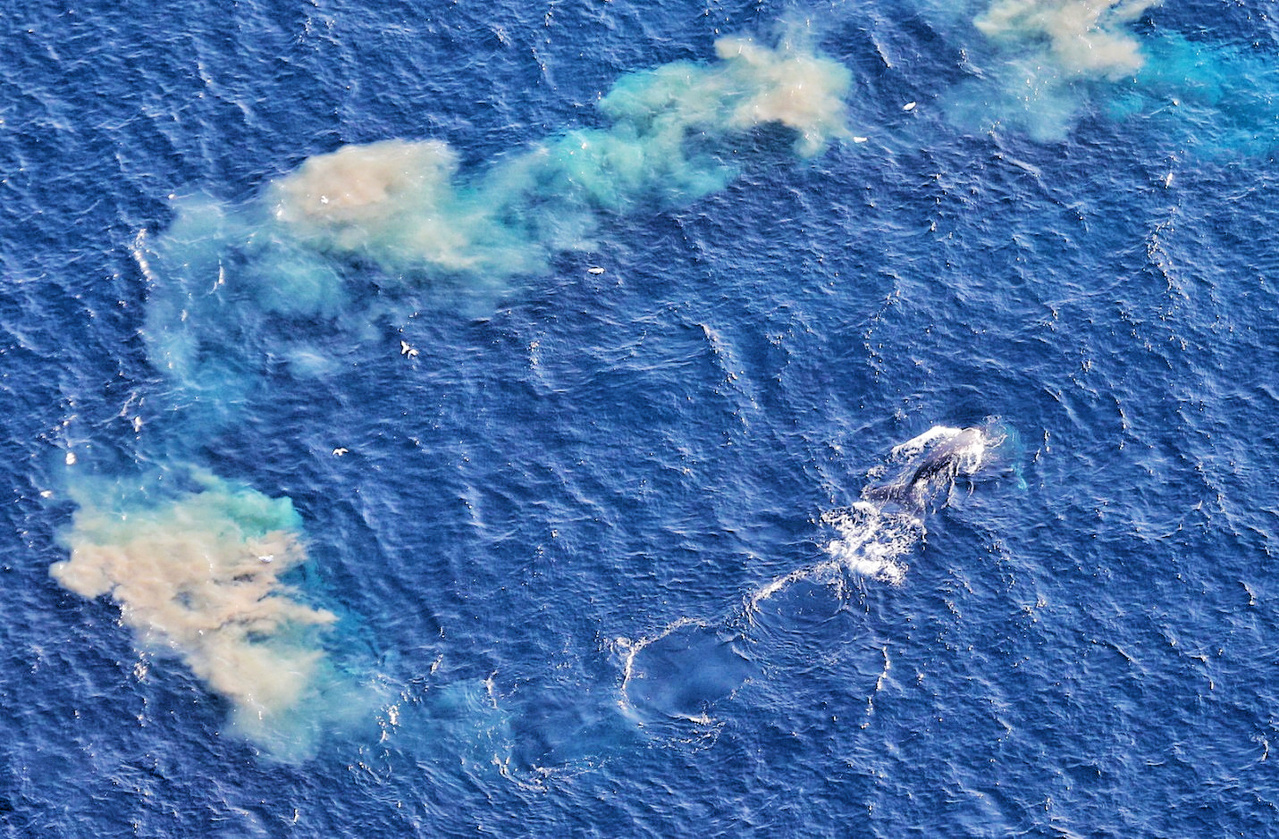 This image shows the semicircular mud plume trail left by the gray whale in the right side of the picture, just before it dove.

What does it mean to have gray whales in the eastern Beaufort Sea? It’s not like this was the first time they have been seen in Canadian waters. Most gray whale sightings in the Arctic are in the Chukchi Sea; in the Alaskan Arctic, the majority of sightings are in the southern Chukchi Sea southeast of Pt. Hope, Alaska, and the northeastern Chukchi Sea between Icy Cape and Utqiaġvik, Alaska. There have been a few, albeit rare, sightings of gray whales in the Alaskan Beaufort Sea. The earliest recorded sighting was in 1933 near Cross Island north of Deadhorse, and there were a few sightings over the years from vessel and aerial surveys. 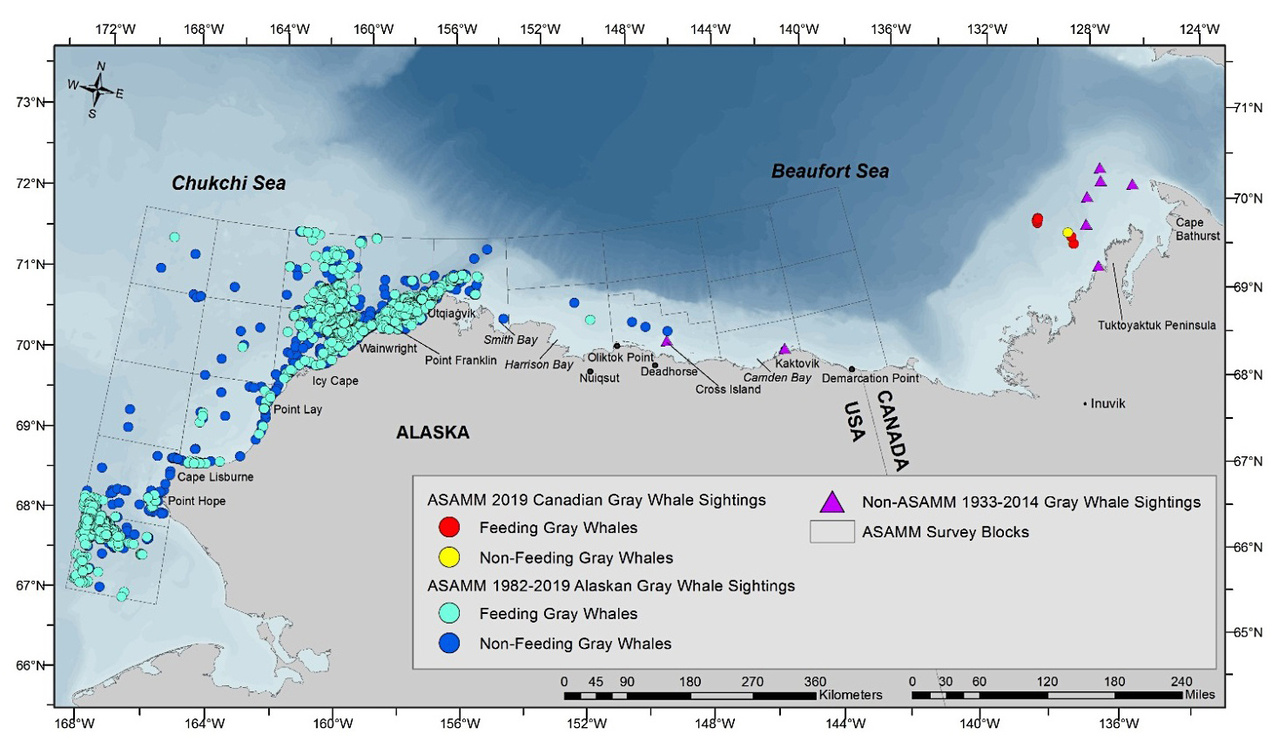 These gray whale sightings in the eastern Beaufort Sea are significant and raise more questions than answers. Observational effort in the eastern Beaufort Sea has been sparse, usually consisting of infrequent aerial surveys specifically for bowhead whales and belugas and a few annual research cruises collecting incidental information on marine mammals. How long have gray whales been feeding here? How many whales come here to feed? Have they been bringing their offspring here to teach them to feed here, too?  Are the same animals returning each year? Are they spreading news of their feast, an example of cultural transmission? How often do they appear - every year, or just when the sea ice has been far enough offshore to make access easier? How dense is the food in this area?  We know that some areas in the Chukchi Sea serve up a regular buffet; is it the same here? We have flown aerial surveys in the western Beaufort Sea every year, for over 40 years; why do we not see them transiting to this area through the western Beaufort Sea more often?

So many questions, so little time to investigate this year! Perhaps with the Northwest Passage opening, and sea ice forming later in winter and breaking up earlier in the summer, gray whales will continue to move farther east to take advantage of feeding grounds we don’t know about yet. With our environment changing so rapidly in the Arctic, we continue to discover new areas of interest and significance. Continued support for long-term research projects, such as this one, is the best way to learn about changes and trends occurring in the polar seascape. 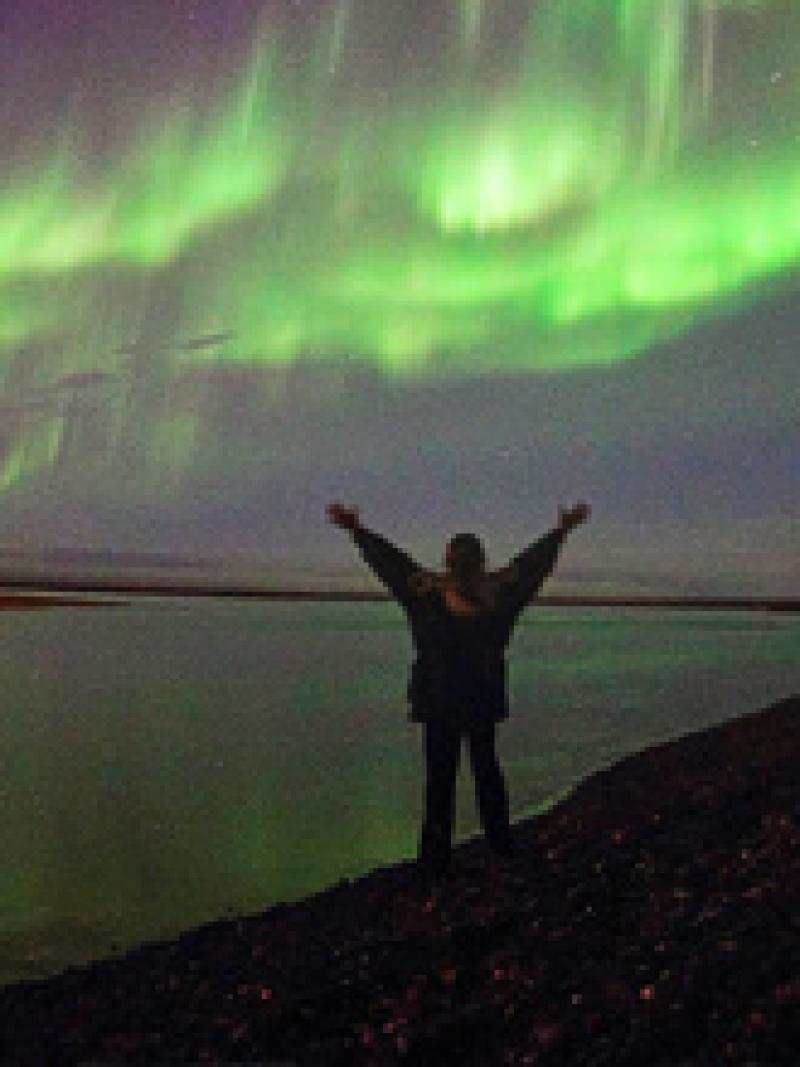