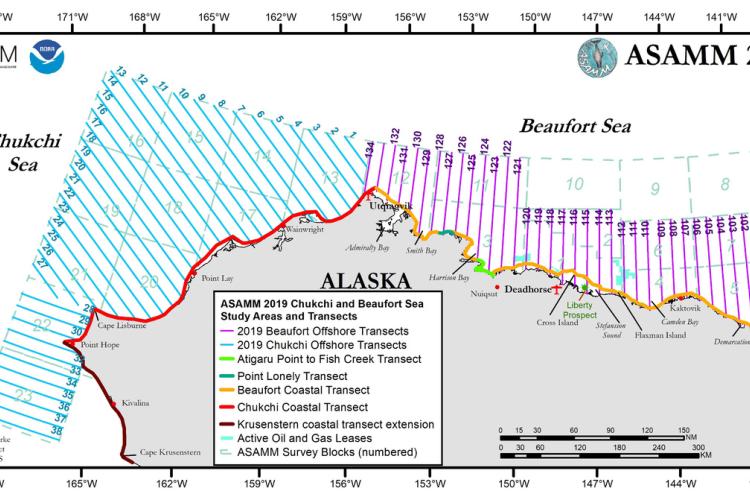 Inter-agency agreements were established between the Bureau of Ocean Energy Management (BOEM), Department of Interior and the Marine Mammal Laboratory, Alaska Fisheries Science Center, NOAA Fisheries, National Oceanic and Atmospheric Administration, Department of Commerce. The intent of these agreements was to provide funding to conduct surveys of bowhead whales (Balaena mysticetus) and other marine mammals in the Alaskan Arctic.

The Aerial Surveys of Arctic Marine Mammals (ASAMM) project was a continuation of the Bowhead Whale Aerial Survey Project (BWASP) and Chukchi Offshore Monitoring in Drilling Area (COMIDA) marine mammal aerial survey project. BWASP was conducted from 1979 to 2010 and targeted the autumn migration of bowhead whales through the western Beaufort Sea, although line transect data on all marine mammals sighted were collected. COMIDA surveys were conducted in the Chukchi Sea Planning Area in the northeastern Chukchi Sea from 1979 to 1991 and 2008 to 2010 to monitor marine mammal distribution, relative density, and behavior during the open-water (ice-free) months, from mid-June or early July to the end of October.  BWASP and COMIDA surveys were funded or conducted by the Minerals Management Service (now BOEM) and the Bureau of Land Management, and starting in 2008, the Marine Mammal Laboratory began co-managing the projects with BOEM.  In 2011, these projects were merged into ASAMM. Survey protocols remained consistent from1982-2019.

The goal of ASAMM was to document the distribution and relative abundance of bowhead, gray, fin, humpback, killer, minke, and right whales, belugas, and other marine mammals in areas of potential oil and natural gas exploration, development, and production activities in the Alaskan Beaufort and northeastern Chukchi seas.

Data from the ASAMM surveys provides important historic context to relate variation in marine mammal distribution or abundance to other variables, such as physical oceanographic conditions, indices of potential prey density, and anthropogenic activities if information on these variables is available. 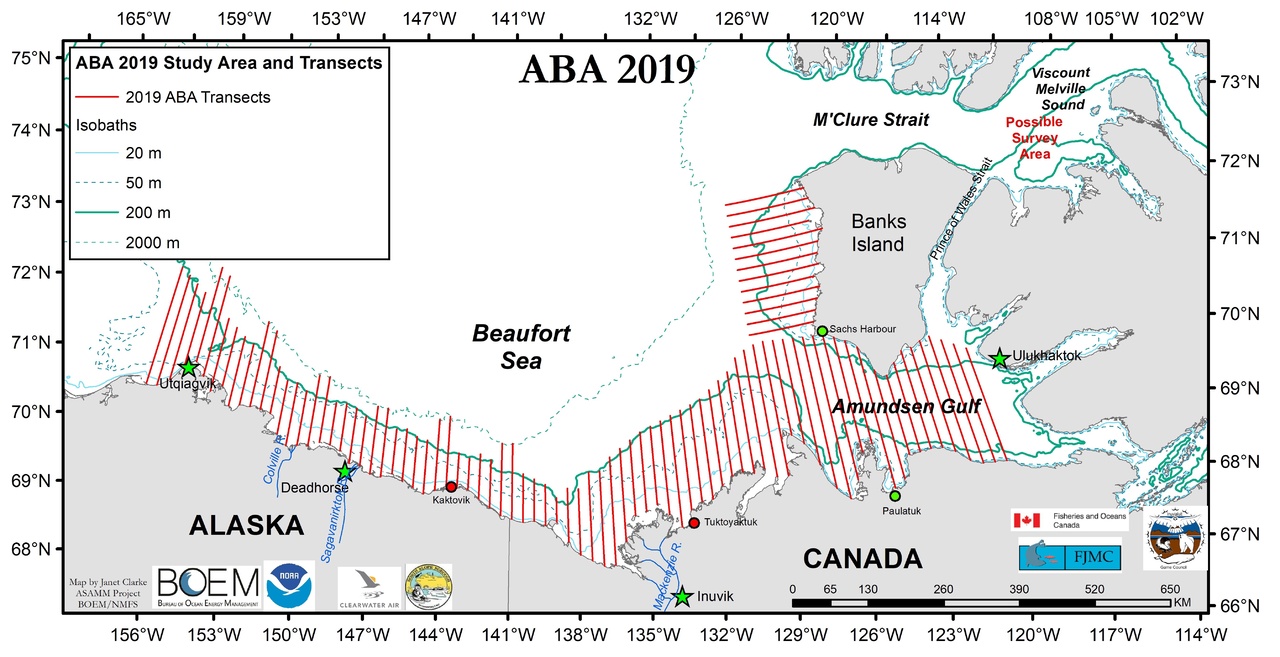 In 2019, the program conducted a bowhead whale abundance survey in the Alaskan and Canadian Beaufort Sea and Amundsen Gulf. This project, ASAMM Bowhead Abundance (ABA), is a collaboration between NOAA, BOEM, the North Slope Borough, and our Canadian colleagues in the Department of Fisheries and Oceans Canada, Inuvialuit Game Council, and Fisheries Joint Management Council.

The Bering-Chukchi-Beaufort (BCB) Sea bowhead whale stock is hunted for subsistence by Native groups in Alaska (and occasionally Russia).

The objective of ABA was to apply ASAMM line-transect methodology to transects covering the Beaufort Sea shelf and Amundsen Gulf, with additional transects west of Pt. Barrow, east of Banks Island, and possibly in Viscount Melville Sound, within a three-week period in August. This area time period is when the majority of the population is typically within a relatively small area and can likely be surveyed using aerial line-transect methods.

The abundance of the Western Arctic bowhead whale stock has been steadily increasing since the mid-1970s, the only stock of bowhead whales to do so…

Over 10,000 bowhead whales migrate annually through the Bering, Chukchi and Beaufort seas in a population that is growing at a rate of 3.4% per year…