During August 4–10, 2021 on Leg 2 of the 2021 AMAPPS abundance survey, we worked mainly in Canadian waters on the southern edge of Georges Bank, farther south to the Gulf Stream, and in international waters. 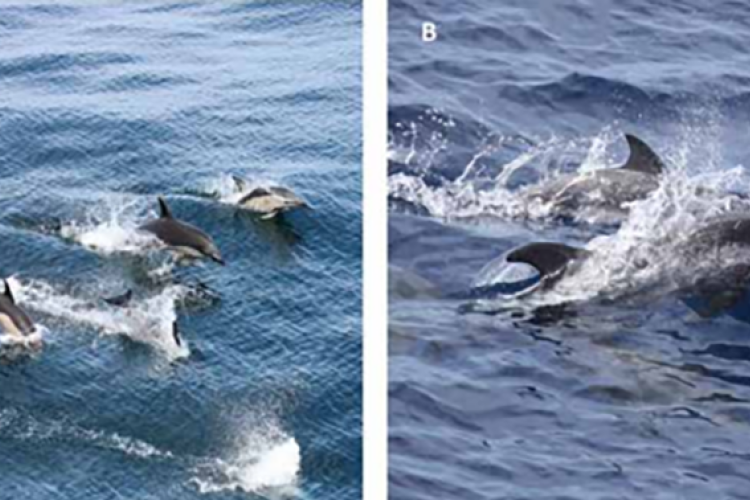 Common dolphins (A) and a mother and calf Atlantic spotted dolphins (B) photographed during Leg 2 of the AMAPPS abundance survey on the NOAA ship Henry B. Bigelow. Credit: NOAA Fisheries

Since the start of this leg on July 23 through this week, we have surveyed about 830 nautical miles. Unfortunately, some 180 of those miles were covered during strong Beaufort wind force scale 5 and 6, not the best conditions for detecting cetaceans using high-powered binoculars. Beaufort scale 5 or 6 winds are considered fresh to strong breezes, with wind speeds between 19 and 31 miles per hour. However, since that is all Mother Nature gave us, we will adjust the analyses accordingly.

Mother Nature also gave us warmer waters than we had seen before, and the observed distributions of cetaceans changed accordingly. Each species has its preferred water types. Common dolphins were in waters cooler than about 22°C (about 71.6°F), while Atlantic spotted dolphins liked it hot!

The bird team had another fantastic week with high diversity and several remarkable sightings. In this week alone we saw 21 species. Choosing a single highlight among the many is no easy task. For example, the least tern we saw southeast of Cape Sable, Nova Scotia is rarely seen anywhere in Canada. We also saw a young masked booby. This sighting is only the fourth or fifth ever recorded for this species in waters off Massachusetts, and a first for an AMAPPS cruise.

The other scarce species seen this week are more commonly associated with warmer water and typically found farther south than our study area. These warm-water species included two red-billed tropicbirds, a single white-tailed tropicbird, and a brown booby. In keeping with the warm-water theme, this week we also saw many Audubon’s shearwaters, more commonly seen in more southerly waters.

The acousticians were thrilled to recognize beaked whale vocalizations in real time out in the field! Beaked whale echolocation clicks are too high in frequency for humans to hear without help. We can identify different species by turning unique combinations of time, frequency, and intensity into an image, called a Wigner plot.

The night watch completed a conductivity, temperature, depth transect across the Northeast Channel, staying just south of the Canadian longline fishing fleet. The Northeast Channel separates the northernmost part of Georges Bank from Browns Bank and is in Canadian waters. The following night we conducted video plankton recorder (VPR) tows highlighting the variable oceanography and diverse plankton in the slope environment. We took advantage of being in warm, salty Gulf Stream eddies to sample for bluefin tuna larvae.

We were shadowed by schools of small jacks and flying fish, attracted to the lights on our side-sampling station. Last, we did a series of parallel VPR tows above Physalia Seamount finishing just before a series of thunderstorms moved into the area. The VPR continues to capture astounding pictures. 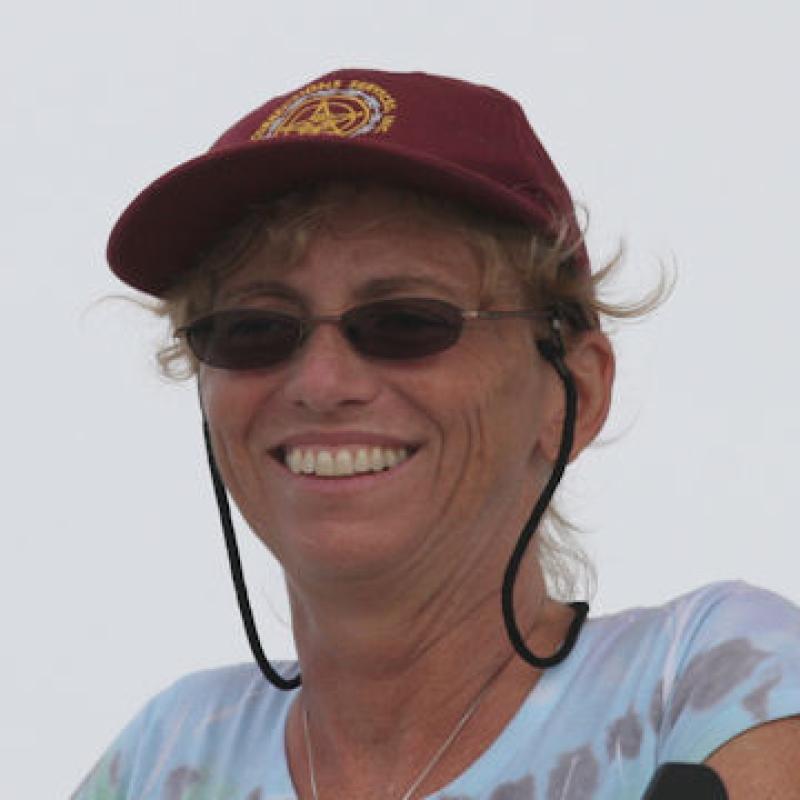 Common dolphins (A) and a mother and calf Atlantic spotted dolphins (B) photographed during Leg 2 of the AMAPPS abundance survey on the NOAA ship Henry B. Bigelow. Credit: NOAA Fisheries
View All