Blog#6 from the Northern Neighbors cruise on the NOAA ship Henry B. Bigelow exploring deepwater communities off the coast of the Northeast U.S. and Atlantic Canada 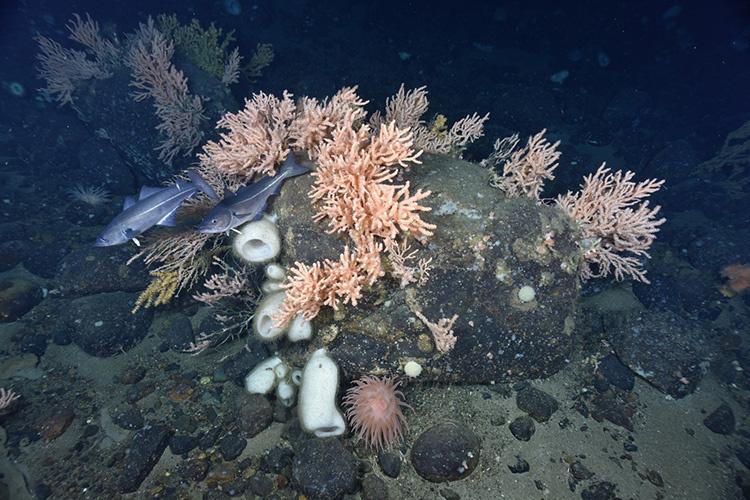 Our next survey was on June 20 in the Northeast Channel, which is the major channel between the Gulf of Maine and the rest of the Northwest Atlantic, bounded by Georges Bank to the south and Browns Bank to the north. At the mouth of the Channel is the Northeast Channel Coral Conservation Area (NECCCA), which, like Corsair Canyon, was classified as a Sensitive Benthic Areas (SBA) thanks to the research of the Department of Fisheries and Oceans, Canada and some work by Anna Metaxas. The government of Canada is proposing a larger Marine Protected Area (MPA) beyond the boundaries of the NECCCA.  Our surveys outside the NECCCA but within the Channel will allow them to assess the current boundaries of the NECCCA, and contribute to the ecological overview of the proposed MPA. 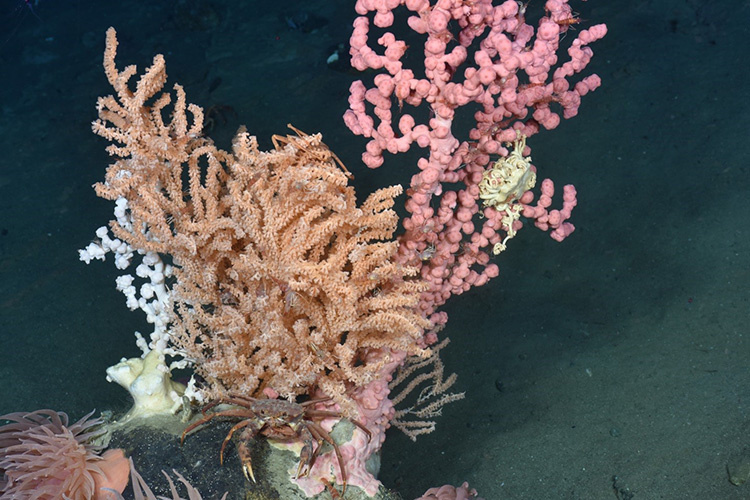 Bubblegum (pink at right; white at left) and Primnoa (orange) corals with a crab on a boulder in the Northeast Channel. Depth 551 meters. Photo credit: 2019 Bigelow/ROPOS U.S./Canada Transboundary Expedition

Because this is a channel, and not a submarine canyon, different physical forces are at work here that shape the overall environment. There aren’t really any steep walls as there are in the canyons. A lot of sediment is being transported out of or through the channel because of the water coming in and out of the Gulf of Maine. As a result, the soft bottom sediment habitats had features like dunes, ripples, and waves, indicating a very dynamic environment.

Starting our dive at about 687 meters, the bottom was mostly barren and the coral was sparse. As we slowly made our way up to 500-300 meters, things became more interesting. On the edge of a ledge just before a steep drop-off we found Paramuricea, bamboo, and other corals. We encountered many “coral oases,” the solitary boulders with large corals growing on top, including bubblegum and Primnoa.  Lost fishing gear was noted. 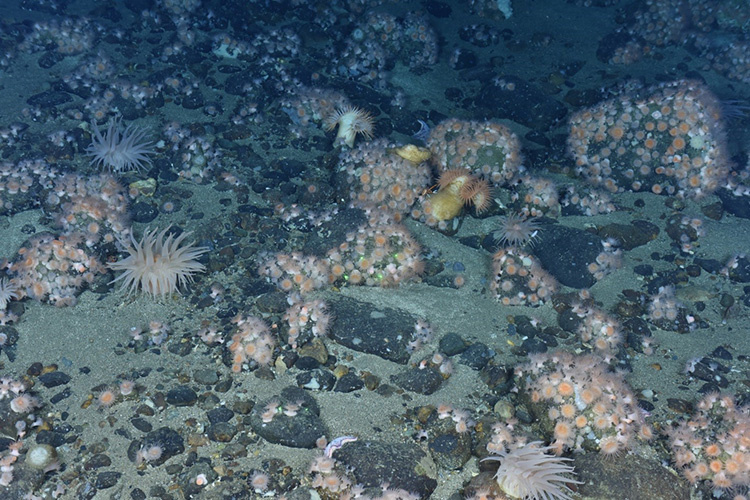 Things got even more interesting as we came up to 300-200 meters. There were lots of rocks, cobbles, and boulders. There were dense aggregations of anemones (“a carpet of anemones”) on some of the boulders. We noted that there were more Primnoa on the boulders than bubblegum coral, and some of the Primnoa were covered by zoanthids. Zoanthids are related to corals, and may be in fact “smothering” the coral, as the corals themselves sometimes did not appear to be too healthy. 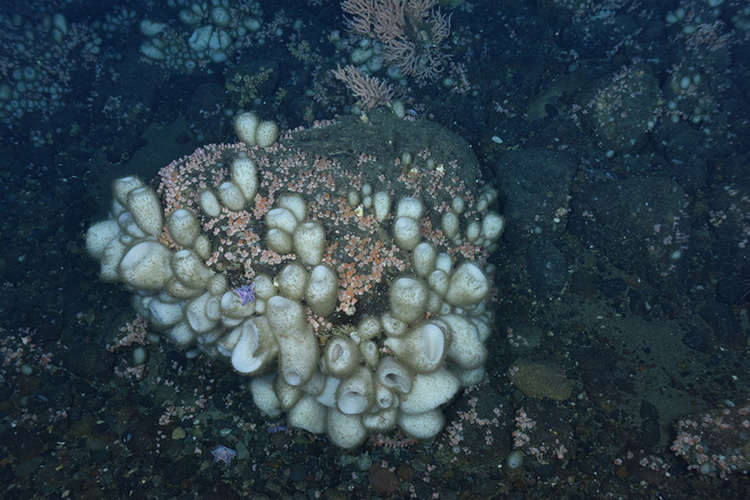 But most amazingly, there were incredibly dense concentrations of Russian hat sponges at these shallower depths. The Canadians, who are familiar with Russian hat sponges, were as awestruck as we Americans who had never even heard of them before. But none of this should be a surprise, as every dive we do with ROPOS yields incredible new sights and insights about the deep (and not so deep) ocean.