Hawaii’s Bottomfish Fishermen Catch Their Fish, and Eat It Too 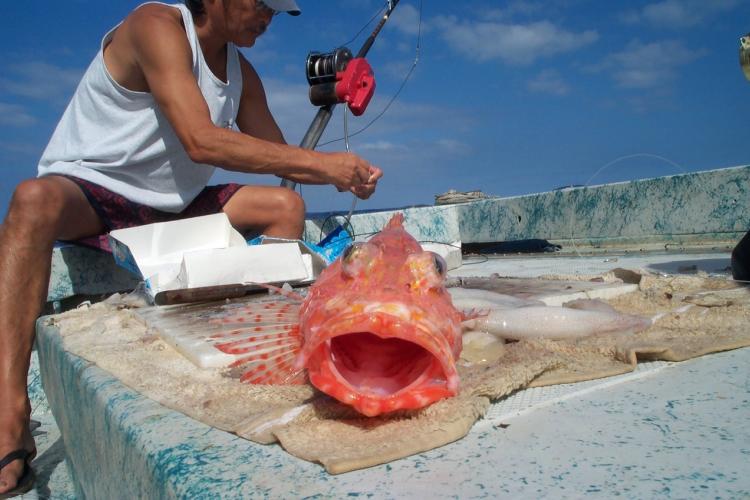 In the recent blog Onaga dai Bonkei!, we shared one of the artistic and culturally significant preparations of bottomfish that we heard during interviews for the Hawai‘i Bottomfish Heritage project. We’re collaborating with the Pacific Islands Fisheries Group to document the history of bottomfishing in Hawai‘i by listening to stories from veteran fishers. The Western Pacific Regional Fisheries Management Council has also been a key partner and is helping us transcribe the interviews conducted over the past year. So far, 31 of 46 interviews have been transcribed, resulting in over 1200 pages of stories! To celebrate National Seafood Month, we searched the transcripts for favorite dishes and preparations from some of the most skilled bottomfish fishers in the state.

Onaga (long-tail red snapper) topped the list as the fish most people identified as their favorite. While it can be cooked many ways, it was most often described as one of the best species to be eaten raw, as sashimi and poke. Some mentioned that the smaller fish, 12 pounds or less, were better for sashimi. And of course it has to be fresh—ideally fewer than three days old! Local monchong were also mentioned as a good fish for sashimi, as it’s clean and not fishy, although many other species were mentioned as well.

The next most popular favorite was gindai (oblique-banded snapper), followed closely by hogo (scorpionfish). These species aren’t usually targeted, so they aren’t common in the market. They are typically enjoyed steamed, Chinese style. One interviewee even had a special pan for steaming fish for parties. Another explained:

Other variations included oyster sauce, garlic, or chung choi (salted turnip), but all were finished by pouring sizzling hot oil over the fish.

Of course, many said that all of the “Deep 7” bottomfishes were delicious and versatile. Other preparations included dry rubbing, slicing, and deep frying with a sauce on the side (to keep the fish crispy); oven-baking with black bean paste, oil, cilantro, and oyster sauce; Japanese nabe soup; and even just frying with salt and pepper. In fact, more interviewees mentioned variations of fried preparations than any other style of cooking. However, they also noted: 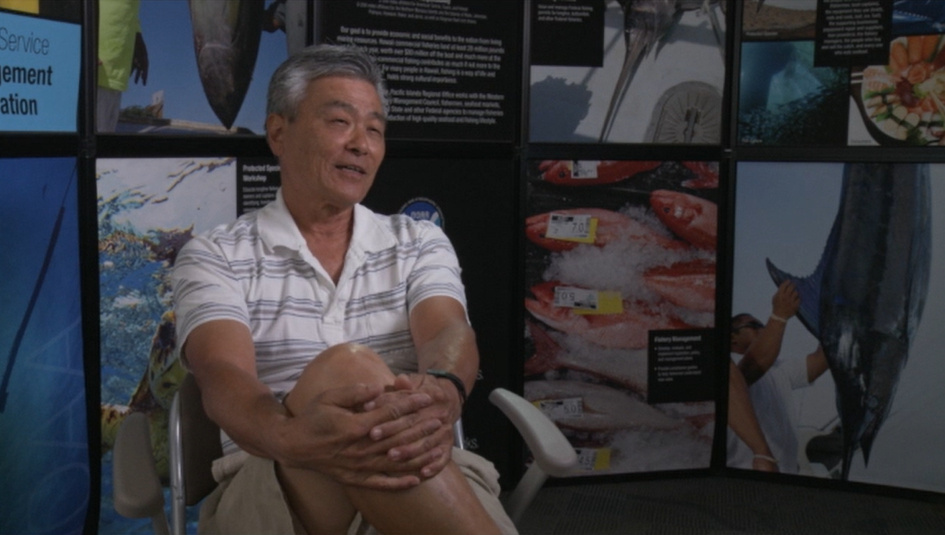 Kurt Kawamoto, NOAA Fish Biologist and key project partner who has fished for bottomfish in Hawaii for 40+ years.

Others said that their favorite fish depended on what they felt like eating at the moment:

That’s a hard question because every fish has different texture, different taste and all of them are good.

It depends on how you want — or what you feel like — how it’s prepared also.  Sometimes, I’m really ono for steamed fish, then, okay, look for this. Or if you want miso fish, then hogo is really good. I like hapu‘upu‘u. Monchong [pomfret], I really like, too. But the local bottomfish monchong [not] the longline monchong…you can eat it so many different ways!

A few interviewees said they didn’t eat much fish, or started to eat fish later in life. Takafuji started fishing in ‘74, and Kobayashi started bottomfishing in ‘85. 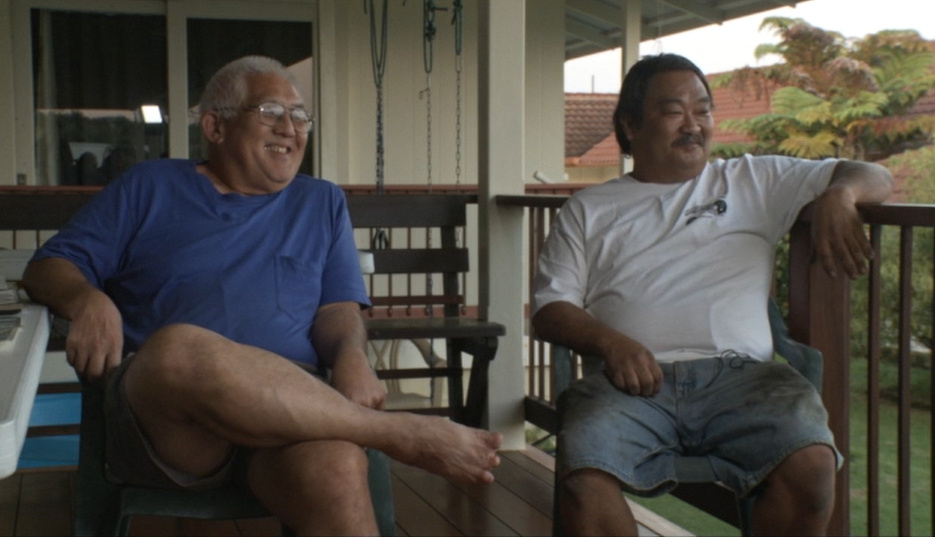 Nash Kobayashi and Ralph Takafuji talk about their favorite types of fish and different ways to prepare it.

We learned a lot about different ways to prepare bottomfish. This part of the interview made us all hungry!

For more information about this research feel free to contact us: pifsc.socioeconomics@noaa.gov

Moffitt:  On the bottomfish, what is your favorite one to eat?

And the first time I ever ate that was on the FERESA with Ed Shallenberger because on that boat what we were doing, because he didn’t have a lot of hold space, what he would do is every night after we were done fishing, we would have to clean all those fish, gill and gut all those fish and we’d hang it in the freezer.  Then after it was frozen the next day, we’d stack them all up like cordwood in the other part of the fish hold.

So while we were doing that, there’s nobody cooking.  So eventually, after being the guy who ties all the rigs, ties all the hooks, I became the cook and the observer, who got down all the information, measured every fish, everything.  So I would be cooking because we were getting tired of eating whatever we had.

To them the important fish to save was like the opakapaka, and all of that stuff.  So what’s left over is like the hogo, and stuff.  So I’d cut off the hogo and I’d dice it all up and give it a quick shake in Bisquick and fry it.  And, boy, that was good.  The texture is really nice and it reminded me of lobster.

Takafuji: Like Gindai. Gindai never went to the market. No matter how much we had, it all went home.

Moffitt: That’s one of questions. What is your favorite species to eat? Sounds like maybe Gindai?

Kobayashi: He started eating fish right, his house, we were looking at him like…Ralph is eating fish??

Takafuji: Um, yeah when I was growing up I didn’t eat fish.

Takafuji: I got married and I moved to Saipan for a little while because my wife wanted to go home to give birth. So I was fishing in Saipan. And the most hilarious thing, I come home from fishing, I wanted to get fish for eat. I was so tired, I was so lazy, I never like cook, I just ate the fish. So I started eating fish finally.

Takafuji: Well, when I was in Saipan, we mostly targeted onaga. We’d average like 600-700 pounds a day. And onaga, blackjacks, um, and lehi, they were the three that we mostly caught. So basically that’s what my kids grew up eating, when it came to fish.

Moffitt: How did you prepare it?

Takafuji: Um, me? I like raw. Onaga, I don’t know, I don’t see what’s so great about it. It’s actually kind of a junk fish if you ask me.

Kobayashi: I agree on that.

Moffitt: Hapu‘upu‘u’s raw or you cook that one?

Takafuji: You can eat them raw or actually the way Nash first time seen me eat fish was kinda like, I’m unusual okay, my mom would cut blocks out of it and she’d blanch it just so the outside edge would be cooked and I’d eat it with miso.

Moffitt: What is your favorite of the species?

Kobayashi: My all-time favorite is hapuʻupuʻu.

Kobayashi: I like mine steamed with black beans. A great eating fish.

Moffitt: Yeah I agree, I like that one too.

Kobayashi: Then there’s a… remember that aholehole moi that used to come up once in a while?

Takafuji: Aww, I don’t know what they actually call them, but yeah I know which one you’re talking about.

Kobayashi: Beardfish I think they call it? Some people tell it’s terrible but it tastes pretty good when you steam it with miso. But it’s a rare fish to catch. Beardfish.

Takafuji: What did we used to call them? Deep-sea moi.

Kobayashi: It looks like a moi with big eyes, blackish color. But it’s a great eating fish.

The PIFSC Socioeconomics Program and Pacific Islands Fisheries Group are collecting stories from fishermen who are experts in catching bottomfish.