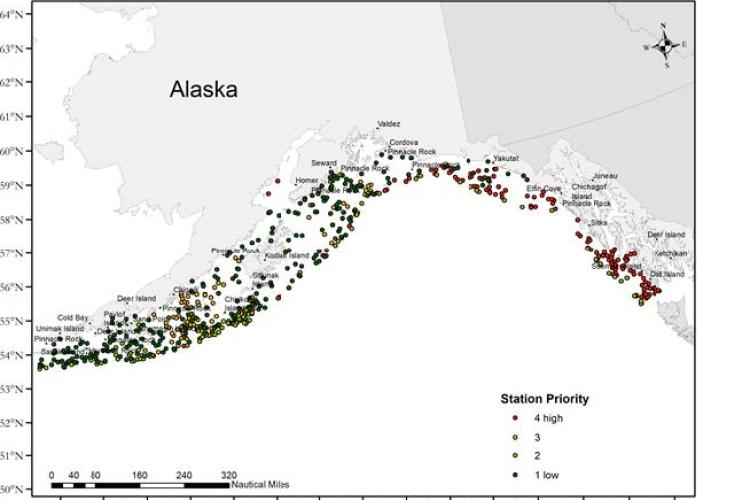 Map of data collection points in the Gulf of Alaska for measuring coral and sponge density and diversity. Color of points indicates priority for sampling a given location. Image courtesy of Sean Rooney, NOAA

For the past several days we have been leapfrogging from station to station as we head to the U.S. – Canada border in Dixon Entrance. During the day, we deploy the drop camera and at night we make long runs with the vessel to cover ground.

The Gulf of Alaska is a big place. To give perspective, it is roughly the same size as Texas or France.

Effective management of deep-sea coral and sponge ecosystems in Alaska requires knowledge of where these organisms occur and how their diversity and abundance varies across the seafloor.

The immensity of Alaska’s marine waters necessitates the development of predictive models to best determine where sponges and corals are likely located, since not every site can be explored given available time and resources.

In the previous Alaska Deep-Sea Coral and Sponge Initiative, scientists produced a series of predictive models that mapped where deep sea corals and sponges were likely to occur in each of the three major regions of Alaska -- the eastern Bering Sea, Aleutian Islands and Gulf of Alaska.

In the Aleutian Islands and eastern Bering Sea, coral and sponge model outputs have been field-tested and validated using underwater stereo cameras that allowed scientists to compare what was predicted to what was actually there.

The current expedition will do this in the Gulf of Alaska, by visiting up to 300 randomly selected sites. To ensure these locations are representative, factors such as water depth, whether the area can be sampled using a bottom trawl, and the predicted probability that corals or sponges are present, were taken into account.

We are deploying the stereo drop camera at each of these stations for 15 minutes to collect observations of the seafloor. The images collected will allow us to determine how accurate the coral and sponge models are and will be used to improve future model outputs.

The stereo-image capability will also allow us to make accurate measurements of the size of both deep-sea corals and sponges and the size of fish observed within these habitats.

Essential fish habitat, also known as EFH, is like real estate for fish. It includes all types of aquatic habitat and, in practice, specifies where a certain fish species lives and reproduces. Marine fish could not survive without these prime locations. Increased influences from climate change and human disturbance also threaten many of these habitats.

So far we have conducted over 70 stereo camera drops. We have observed many corals and sponges but we have also seen a lot of other less “exciting” habitats.

As Chief Scientist Pat Malecha explains, “This project is more than about simply looking for corals and sponges – it is an ambitious attempt to characterize vast areas of the Gulf of Alaska seafloor, including identifying areas with and without coral and sponge. Like the land above the ocean, the seafloor below it varies considerably from place to place. The bottom can be composed of mud, sand, gravel, boulders or bedrock and it can be flat or steeply sloped. These characteristics, along with depth, have a lot to do with what is found living on the seafloor. Although some areas may not harbor corals and sponges, the exciting thing is that each dive is different. There is usually something interesting to see on every one.” 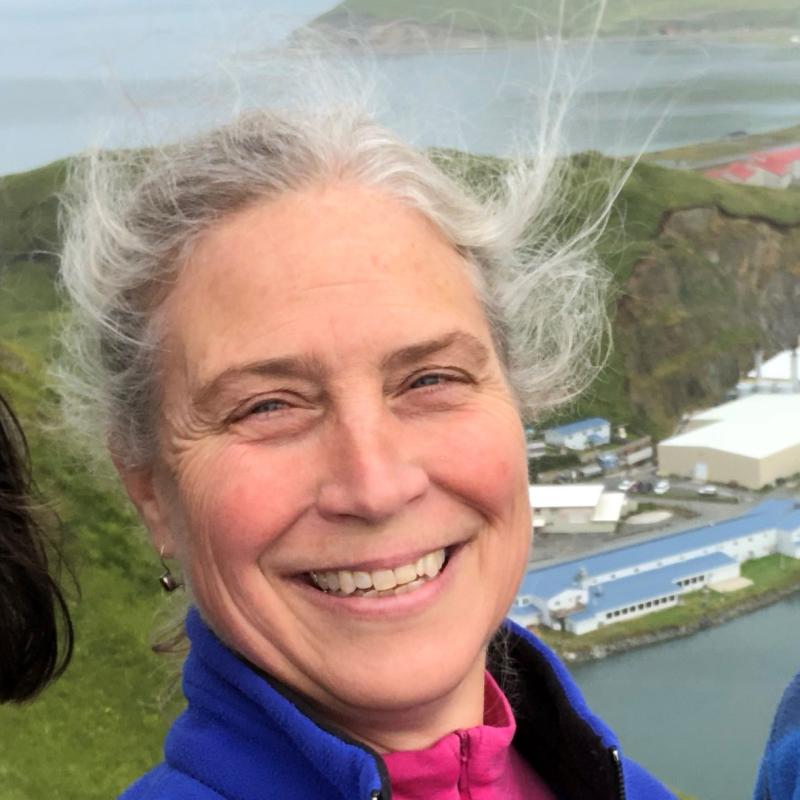 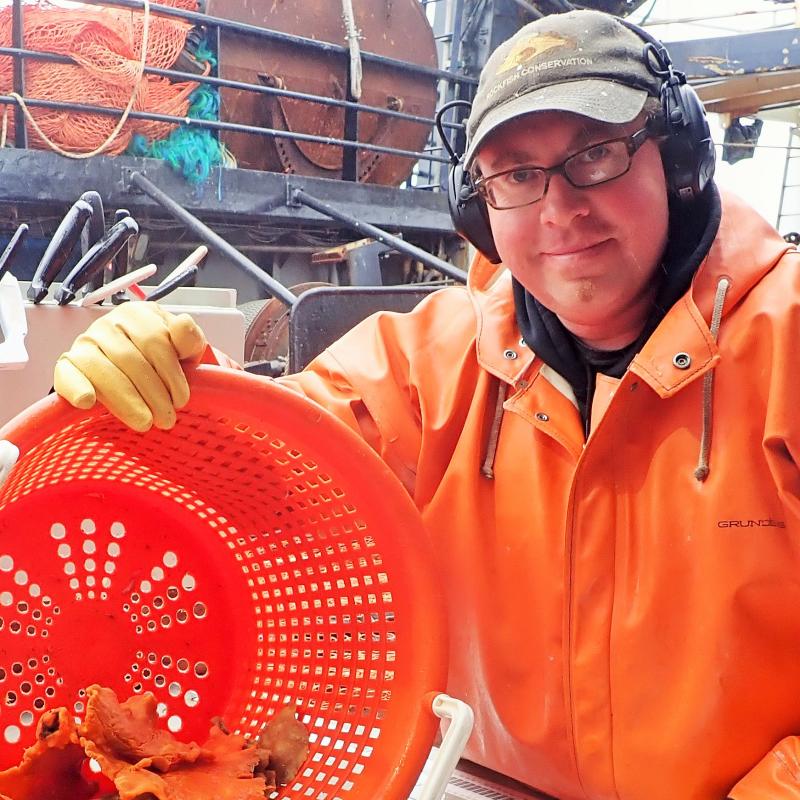 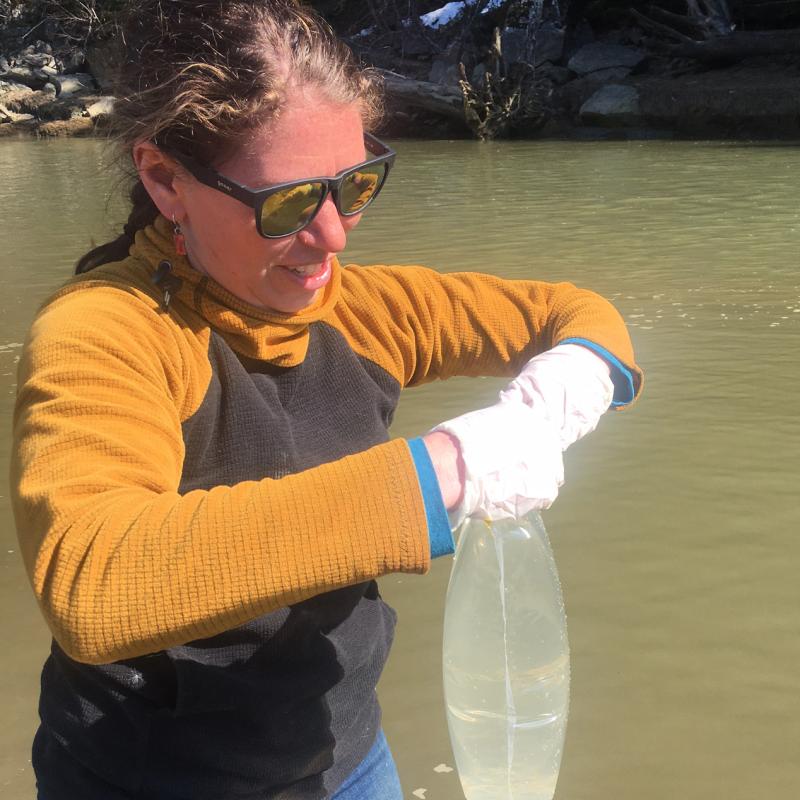