Fishery observers are a key part of the effort to help ensure that America has sustainably harvested seafood. For Oceans Month, we asked a few to blog about being an observer, what drew them to this work, their favorite observer memories, and more. 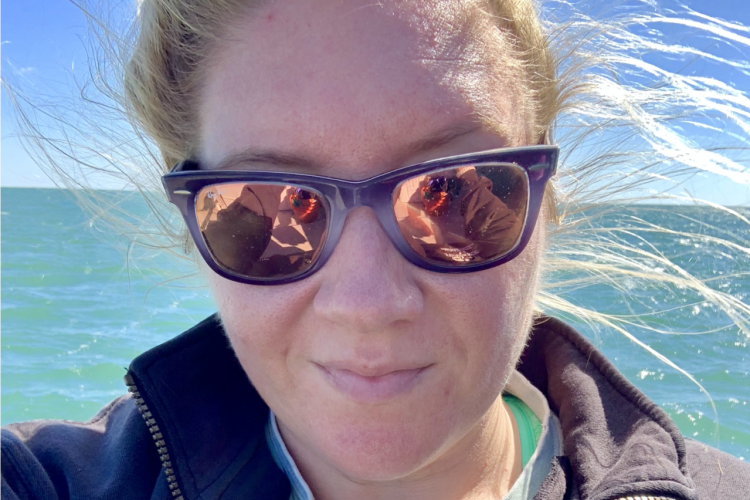 My name is Camille Smith and I have been observing for about two and a quarter years. I am originally from Quantico, Virginia, but currently live in North Carolina’s Outer Banks. That’s where my homeport is located, at the southernmost end of Roanoke Island in Wanchese.

I earned my undergraduate degree in biology from Providence College in Rhode Island. Then I received a second bachelor’s degree in marine science and biological oceanography from the University of South Carolina. I have always wanted to be a field biologist. When I read the fisheries observer job description on the Texas A&M Department of Wildlife and Fisheries Sciences job board, I jumped at the chance!

I love observing longline fisheries because you have the opportunity to see so many other species that you wouldn’t normally see on other trips, like chain dogfish and blackbelly rosefish. Longline trips target golden tilefish and I have sampled some that weigh up to 100 pounds! Part of the reason I love day trips out of North Carolina is because I only live about 20 minutes from the docks in Wanchese. Besides being very convenient, there’s no waiting around. I get antsy on trawl trips when I have to sit around for hours while the net tows behind the boat.

Gillnet trips are fast paced, and as the day goes by I love watching the deck fill up with thousands of pounds of Atlantic croaker or Atlantic cutlassfish. However, depending on the time of year and the target species, North Carolina days can be grueling and long. There are some days where you will leave the dock at 3:30 am and land at 12:30 am the next morning. Then you do it all again in a few hours! They’re always exciting and that almost makes up for the long hours and strain. 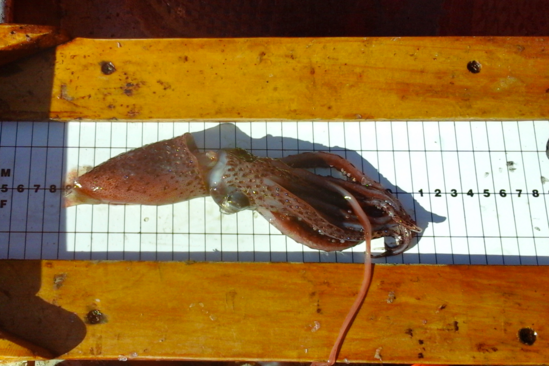 Reverse jewel squid caught in a trawl net while fishing off of the coast of Stonington, Connecticut. Photo credit: NOAA Fisheries/Camille Smith.

It’s hard to be grumpy at 6 a.m. as you watch the chaos of 15 fishermen setting six or seven nets at 15 knots each. The normal setting speed is between 6 and 12 knots, so 15 knots results in the captain, crew, and observer finding the closest thing to hold onto. The captains furiously turn their steering wheel and look back over their shoulder at their net reel. There are hollers of frustration and complaints on the radio about people setting nets on top of other people’s nets. The radio gossip alone is a solid source of entertainment. Plus, the sampling on these trips is never too bad because the catch is so clean, meaning most of the fish coming up in the nets are of the same species. Luckily, there are less species to sort through and most of the catch is kept, making our lives as observers a little easier.

One of my favorite trips was out of North Carolina’s Swan Quarter port. It was a three-day gillnet trip targeting spanish mackerel. Since we were on a small gillnet boat, meals consisted of instant coffee and hard-boiled eggs cooked over a tiny one-burner Coleman camping stoves. Fortunately, I had also brought a few peanut butter and jelly sandwiches to share. I slept in a cramped space in the bow (front) of the boat that the captain described as “Harry Potter’s under-the-stairs-closet.” It was cramped, but it was a cool few days. Another memorable trip in early 2020 was a gillnet trip out of Carolina Beach, North Carolina. We were on a small skiff with barely any standing room and even less space for observer data sampling. The captain couldn’t stop talking about how great his kids were and he bragged even more about his grandkids. It’s days like that that make you appreciate your job and the fishing industry as a whole.

The coolest thing I have seen so far is a reverse jewel squid. It came up in a trawl net while I was on a squid trip out of Stonington, Connecticut, in November 2018. The crew had never seen one before and we were all blown away by how pretty it was. It was a beautiful purple color and looked like it had been bedazzled by a jewel-happy 90s teenager.

When you’re not doing paperwork or sampling out on deck, multi-day trawl trips give you some downtime.* For trips like these I load up my Kindle with plenty of books, TV shows, and movies. My top three books include “The Bell Jar” by Sylvia Plath (it’s a personal favorite that I’ve read every May for the last 15 years!), “Bossypants” by Tina Fey, and “The Charm School” by Nelson DeMille. The three things I watch on almost every multi-day trip are “30 Rock,” “Bridesmaids,” and “The Royal Tenenbaums.” “30 Rock” came out in 2006 and between then and now, I’ve probably been through the series at least 10 times. I’ve probably also seen “Bridesmaids” and “The Royal Tenenbaums” at least 10 times each.

*Fishing, like other jobs and careers, can have periods of downtime. Observers often fill it with data responsibilities, talking and connecting with the captain and crew, or other observer-related activities. But sometimes, to break things up, observers will read or watch media while gear is fishing, the vessel steams between fishing spots, or the vessel and gear undergo maintenance.

The COVID-19 emergency resulted in disruptions in NOAA Fisheries’ observer programs, but we remain able to place observers throughout the country.  While it did take Northeast observers off the water, that should change in July.

An Abundance of Dolphins and a Rare Bird

The night shift! Due to covid protocols, we sailed with one person fewer than we normally would on each watch, and a last-minute adjustment left the night watch (midnight to noon) two people short. They did a great job keeping up with the work. Chief scientist Phil Politis stepped in to help both watches process fish. (Left to right, back row) Sean Lucey, Bill Duffy. (Left to right front row) Joe Warren, Katherine Foley, Katie Rogers. Credit: NOAA Fisheries
View All