Safety First! Practicing Safety Aboard The Henry B. Bigelow

Safety is an issue that everyone on the ship takes very seriously. 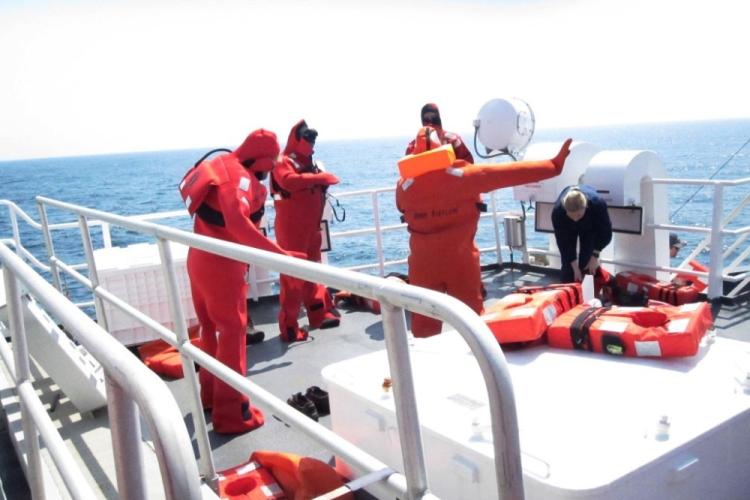 Safety is an issue that everyone on the ship takes very seriously.  Fire extinguishers, fire stations, emergency escape breathing devices (EEBDs), immersion suits, defibrillators, and personal flotation devices (PFD) can be found all throughout the ship.  Drills are designed by an officer who creates an emergency situation which could be a fire or chemical spill.  The emergency is always in a different area, and sometimes if it’s a fire drill, a smoke machine is used which definitely adds an element of reality! 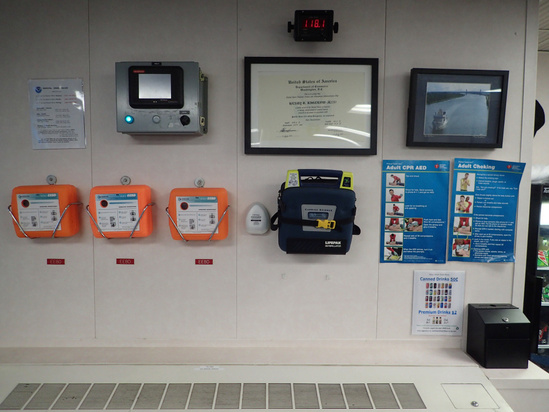 Drills are practiced once a week, and every single person aboard ship has a job during the drill.  It could be investigating the emergency, directing communications/activities, or mustering to a safe place, to name a few.  Once the alarm for the fire drill is set off, one ten-second tone, everyone immediately stops what they’re doing and heads directly to their assigned muster.  The ship crew split into on-scene, damage control (DC) locker forward, DC locker aft, engine room, and bridge groups.  The on-scene group is first on the site to assess the emergency.  Depending on where, what, and severity of the emergency, people from the DC lockers will assist with any needed equipment or personnel.

Meanwhile, the bridge is monitoring the events and guiding the responders.  The crew in the engine room have the ability to control the electric grid to either divert electricity from the hazardous area or make sure there is power for some other necessary task.

When the fire is extinguished and area secured, a fire hose is cleaned out by shooting water over the side.  This tests the pump and keeps the inside of the hose clean.  After the crew remove their gear and clean up the tools, the abandon ship alarm sounds with six short and one long tone.  The crew grabs some Emergency Position Indicating Radio Beacons (EPIRBs) and joins the scientific party on the bow.  We practice dressing into our immersion suits to make sure it fits, there are no holes, and there’s a light and whistle attached.  When everyone is finished, the captain announces “secure from drills and heed all further alarms,” and it’s back to regular ship life. 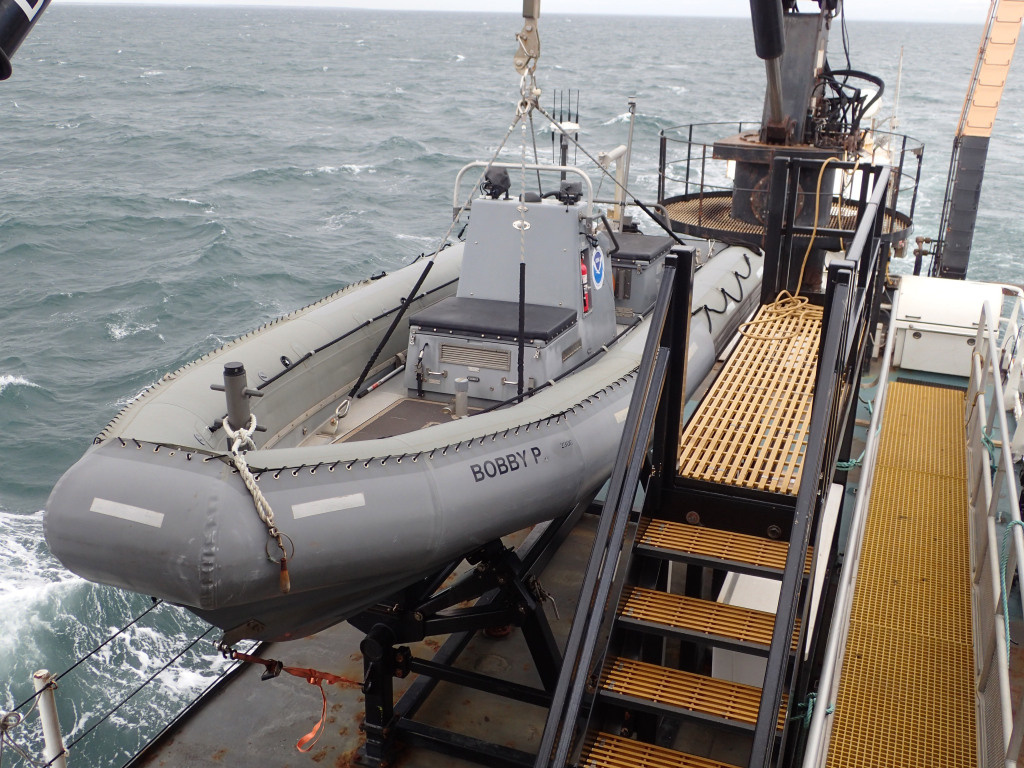 Occasionally, we’ll practice a man overboard drill which is announced by three long tones.  For this drill, a dummy or some floating object is thrown overboard.  The science crew musters to the flying bridge as lookouts.  Some crew are stationed at the hospital room and others ride out in a Rigid-Hulled Inflatable Boat (RHIB) to retrieve the “man overboard”.  The cold water makes a fast retrieval paramount for the victim’s survival, so it’s best to avoid falling over!

There is a chemical hood onboard for preserving stomach and gonad samples.  Gloves are always worn when filling sample jars, but in case of an accident, there is a spill kit and body/eye wash station nearby. 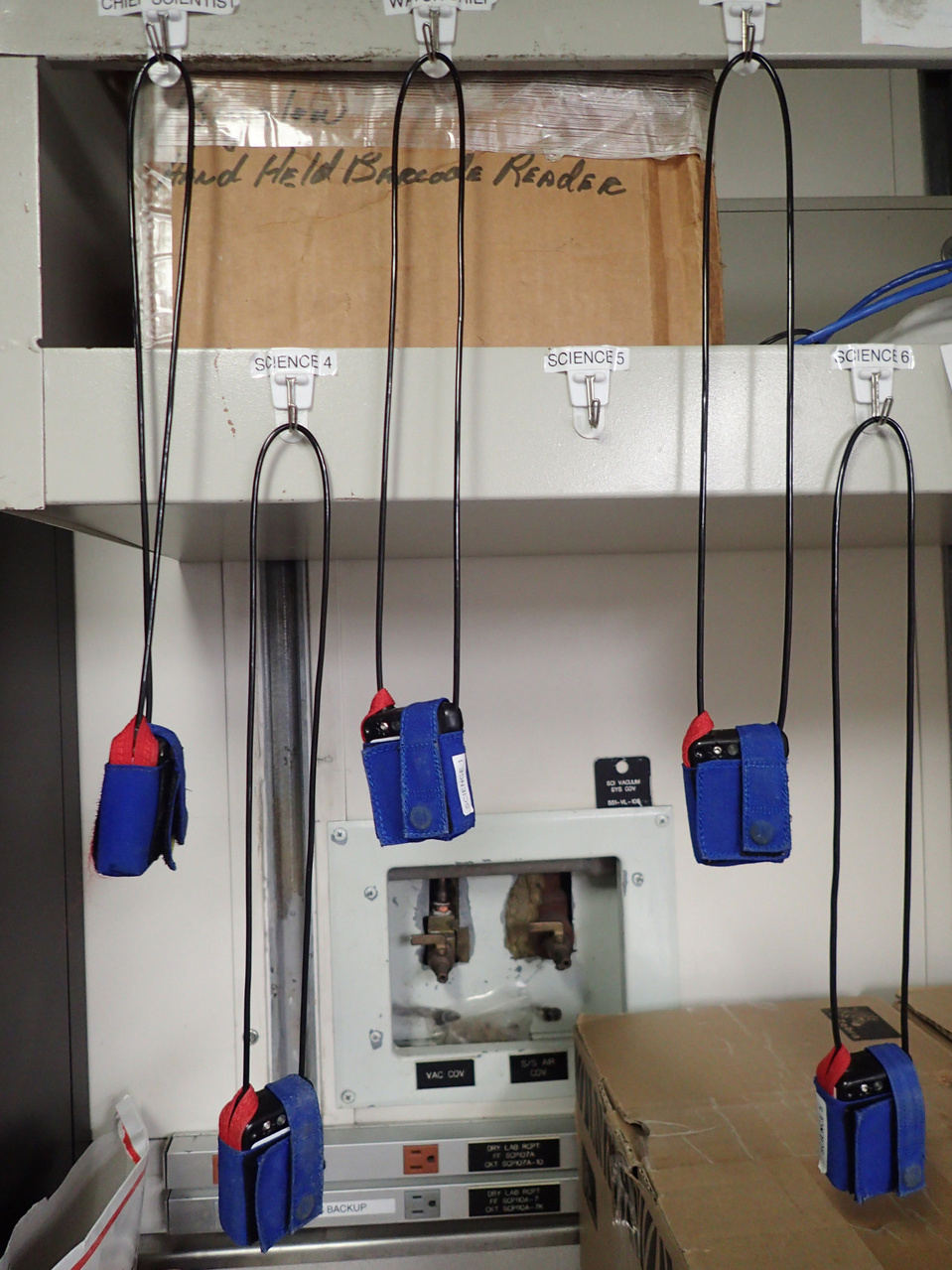 PFDs (personal flotation devices, or life jackets), helmets and man over-board beacons (MOBs) are always worn while working on the back deck.  When wet, the MOB sends a signal to the bridge that someone is in the water.

Safety drills aside, we are also encouraged to be mindful of tripping hazards, heavy weather doors, wet stairs, hot electrical boxes, slippery floor surfaces, dryer lint traps and in general, keeping one hand free to help you move around the ship.  One rogue wave could easily throw you down a staircase!  Ultimately, a successful trip is one where everyone comes back uninjured and alive. 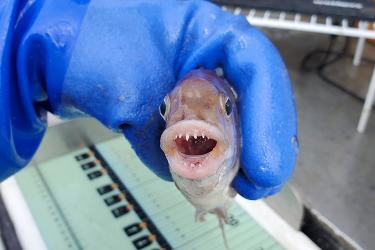