Greetings from the night crew aboard the NOAA Ship Bell M. Shimada! Operations on a research vessel are a 24/7 endeavor while at sea. On the Northern California Current Ecosystem surveys, those operations include sampling water at depth, deploying nets, operating the ISIIS (In Situ Ichthyoplankton Imaging System), amongst other tasks. In the early hours of May 26th 2021, the night crew had the rare opportunity to sample underneath a Super Flower Blood Moon. A “Flower Moon” is the name given to the May full moon as it aligns with the blooming of spring flowers. The Super Flower Blood Moon was not only the May full moon but was also the first total lunar eclipse since 2019! While sampling at sea under a lunar eclipse was a beautiful sight, the moon and underwater world we are sampling are more connected than one may think. Keep reading to learn more about the connections between oceanographic research and the moon.

If you have ever gone to the beach expecting it to be wide and sandy but were instead greeted by a high-water line, you can thank the moon! The position of the moon and sun relative to Earth drives tides. The celestial bodies both exert a gravitational pull on the Earth. Since the moon is so close, it’s pull is particularly evident in tides.  As the Earth rotates, the gravitational pull exerts a force on the oceans on the side of the Earth closest to it.  The gravitational pull of the celestial bodies cause the oceans to bulge on those sides, resulting in a high tide. As the Earth continues to rotate, the location of the bulge will move around the world. Since the orientations of the moon, Earth, and sun change over time, the various orbital paths of the three celestial bodies influence the timing and intensity of tides. On a full or new moon (like the Super Flower Blood Moon), the gravitational force of the sun increases tidal changes. This can result in a very high or low tide.

In modern times, the Shimada and other research vessels are equipped with high tech equipment to navigate. Early ocean explorers had to rely on celestial navigation, or using the position of objects in the night sky to direct themselves. The position of a ship relative to the moon and other celestial bodies can help determine where a ship is and how much time has passed at sea.

Many ocean animals around the world rely on the moon as a biological cue, or signal, that it is time for certain events to occur. Recently hatched baby sea turtles look for the light of the moon reflecting off the ocean’s surface to know which direction they should go to water. Many species of squid, corals, and other ocean animals time their spawning with the phases of the lunar cycle. Zooplankton and other deeper dwelling organisms vertically migrate from depth to the surface everyday with the change of light from day to night. This daily journey- sometimes over thousands of miles- is to find food and avoid being eaten in surface waters during the daytime.

Can you think of any other connections between the ocean and moon?

This post was written by Ashley Hann, who is a graduate student at Oregon State University and joined us on the NCC ecosystem survey.

Previous: Squishy Science Next: Roger That, We are Currently Enamored 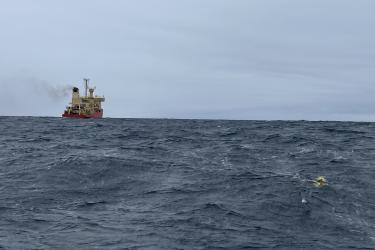 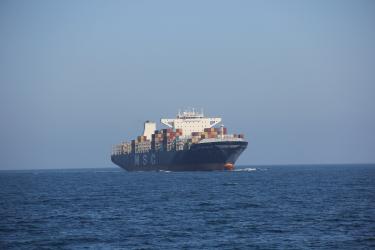 A cargo ship in the Channel Islands National Marine Sanctuary. Credit: A. Simonis/NOAA Fisheries
View All