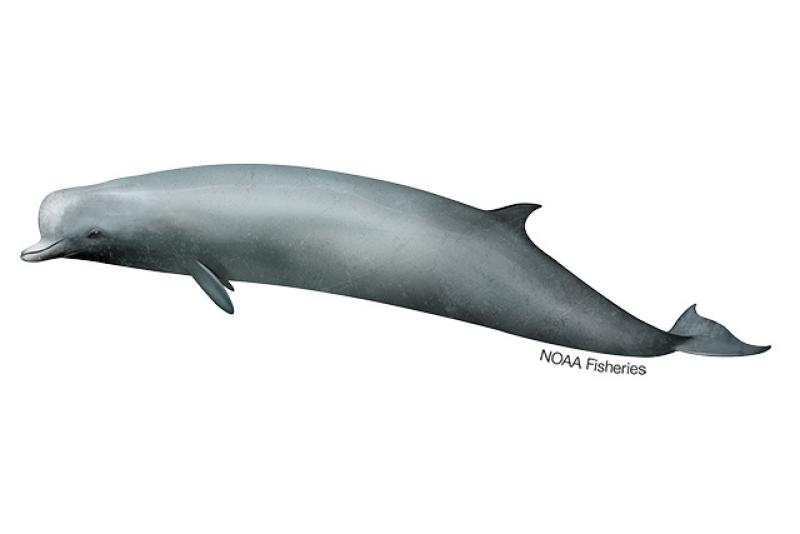 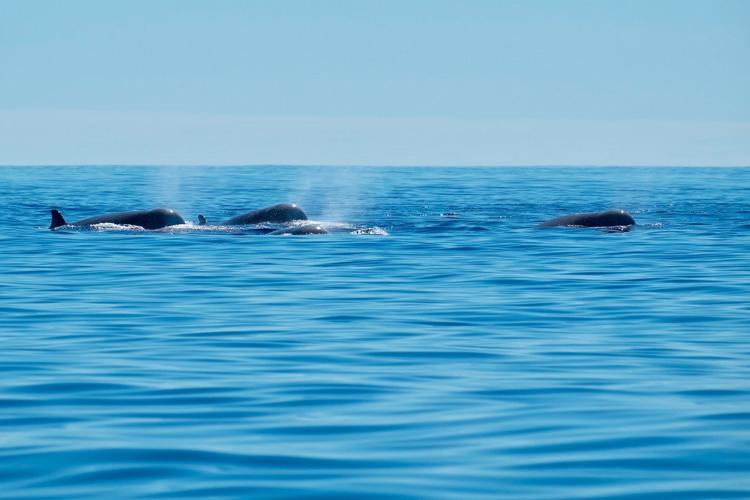 Northern bottlenose whales are the largest members of the beaked whale family in the North Atlantic Ocean, where they prefer cold, deep, temperate to sub-arctic oceanic waters. Their scientific name (Hyperoodon ampullatus) is derived from the Latin word ampulla for the bottle shape of their beak.

Overall, the beaked whale family is cryptic and skittish, making it difficult to distinguish between them. Northern bottlenose whales, however, are the most extensively studied of the beaked whales because they used to be heavily hunted, making carcasses available for scientists to examine.

Although they were easy targets for whalers long ago and currently face threats from human-caused noise, northern bottlenose whales in the United States are not endangered or threatened. Like all marine mammals, they are protected under the Marine Mammal Protection Act.

NOAA Fisheries estimates population size for northern bottlenose whales in its stock assessment reports. A stock is a group of animals that occupy the same area and interbreed. There is little information on the abundance of this species worldwide, and data are insufficient to estimate population trends.

As adults, northern bottlenose whales can reach lengths of approximately 36.7 feet and weigh up to 16,534 pounds. Males may be slightly larger than females. Northern bottlenose whales have a large, long, robust body with a small, triangular, hooked dorsal fin that is located about two-thirds down their back. They have a distinctive, bulbous forehead (known as a melon) that is lighter in color and a well-defined, bottle-shaped beak; however, these characteristics may vary with sex and age. The melon becomes steeper and flatter as the whale ages. Adult males have a pair of relatively small, conical teeth that angle slightly forward and are visible on the tip of the lower jaw. A second pair of teeth is sometimes hidden in the gums behind the exposed pair of teeth, and 10 to 20 additional vestigial teeth can be found in the gums of the upper and lower jaw.

While at the ocean surface, northern bottlenose whales produce fairly small, bushy blows every 30 to 40 seconds that are about 3.3 feet tall and visible from a significant distance. Their coloration varies from dark gray to brownish to olive, and their skin may appear lightly mottled and covered with scars and/or other markings. The dorsal side is darker than the ventral side, giving it a counter-shading appearance. The face and melon often appear light gray to white. Mature females often have a white band around the neck.

Northern bottlenose whales are usually found individually or in social groups averaging between four and ten individuals, but they have been occasionally seen in larger groups and loose aggregations of up to 50 animals. Groups may consist of various combinations and/or be segregated depending on age, sex, or life stage. Males are known to be combative, using their large heads to hit one another. This species does not tooth rake during aggressive encounters, unlike other species of beaked whales.

Regular dives of northern bottlenose whales range from less than 10 minutes to 60 minutes, commonly reaching depths of at least 2,600 to 5,000 feet, but they are likely capable of diving and holding their breath for up to two hours. While diving, they feed near the ocean bottom mostly on deep-sea cephalopods (e.g., squid), fish (e.g., herring), shrimp, sea cucumbers, and sea stars. Juvenile animals may feed on prey closer to the surface.

Northern bottlenose whales can be found throughout the North Atlantic Ocean and range from New England, Canada, Greenland, Iceland, England, and Europe up to Spitzbergen and down to the Azores and northern Africa (Canary Islands). They have been sighted from 30 degrees North to close to the ice edge in the Arctic. Scientists have conducted long-term studies of a resident group off of Nova Scotia, Canada (a large submarine canyon called the “Gully”), and strandings have occurred in the Baltic Sea, Bay of Fundy, and Rhode Island. This species can travel more than 620 miles.

Northern bottlenose whales reach sexual maturity between seven and 11 years. A sexually mature female will give birth to a single calf every two or more years during the spring or summer (usually between the months of April and August). Gestation lasts about 12 months. Newborn calves are about 10 to 11.5 feet in length and weigh 660 pounds. These whales have an estimated lifespan of at least 37 years.

Fishermen discovered spermaceti (a waxy substance used in oil lamps, lubricants, and candles) in Northern bottlenose whales in the 1850s, which started a commercial whaling fishery for the species. The species was also hunted for pet food. Whalers exploited the curiosity and social bonds of these animals, which were often attracted to stationary vessels and stayed with wounded or injured members of their pod. The fishery closed in the 1970s. During this time, whalers killed more than 80,000 Northern bottlenose whales.

For the last several decades, northern bottlenose whales have remained unexploited, except for the animals killed in the Faroe Islands drive fishery. In Canada and Norway, these whales were hunted for meat and oil until the population was depleted.

This species may be sensitive to underwater sounds and man-made noise. Deep-diving cetaceans like northern bottlenose whales use sound to feed, communicate, and navigate in the ocean. Sound pollution threatens them by interrupting their normal behavior and driving them away from areas important to their survival.

All northern bottlenose whales are protected under the Marine Mammal Protection Act. Our work protects this species by:

Our research projects have helped us better understand northern bottlenose whales and the challenges they face. Our work includes:

Like all marine mammals, the northern bottlenose whale is protected under the Marine Mammal Protection Act. NOAA Fisheries is working to conserve this species to ensure populations remain stable.

NOAA Fisheries conducts research cruises to collect information on beaked whale stocks, such as habit preferences and feeding ecology. These studies also help us estimate the abundance of beaked whales. Information from this research can be used in management actions to protect these animals.