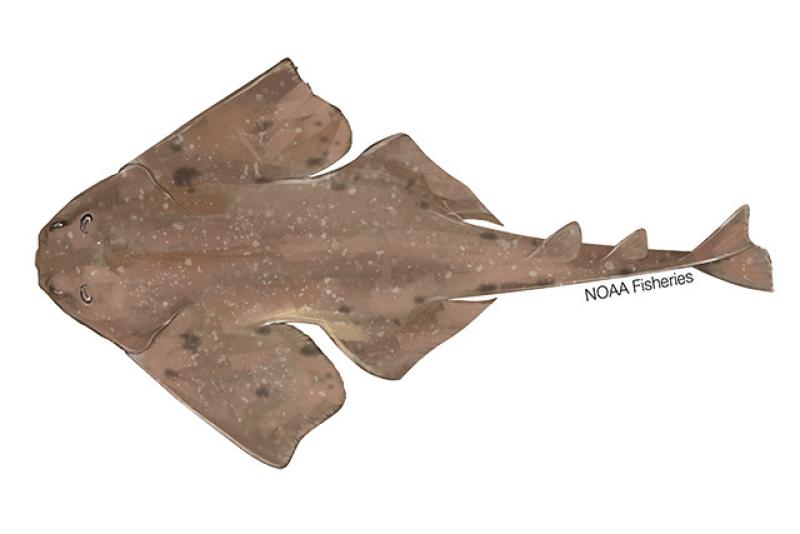 Angelsharks are recognized by their batoid shape (similar to a ray or skate). The smoothback angelshark can be distinguished from other angelsharks by its big thorns, sharp, tooth-like structures on the skin, that are present on the snout and above the eyes, a first dorsal fin that originates well behind the pelvic rear tips, and noticeable white spots in symmetrical patterns on the pectoral fins and body.

Smoothback angelsharks are ambush predators, meaning they lie in wait for prey to pass closely overhead before attacking. They eat small fish, including goatfishes.

Smoothback angelsharks are found in continental shelf and upper slope sediment habitats in the Mediterranean Sea and eastern Atlantic. These sharks are nocturnal bottom dwellers occurring in depths of 66 to 1837 feet and prefer to spend most of their time buried in the sand or mud during the day.

The primary threat to the smoothback angelshark is overutilization in commercial and artisanal fisheries, particularly demersal fisheries (e.g., trawl fisheries). Historically, angelsharks were so common that fishermen developed a special net designed specifically for catching them. However, over the last 50 years, significant population declines in angelsharks have been observed, with these declines coinciding with the start of trawling activities in the northeast Atlantic and Mediterranean. Because angelsharks are sedentary, bottom-dwelling species, they are highly susceptible to being caught in demersal and trawl fisheries. Consequently, as these fisheries expanded with the use of steam-powered trawlers in the 1890s, angelsharks began to suffer significant declines in abundance throughout their historical range. Evidence of illegal fishing operations have also contributed to declines in smoothback angelshark populations. The species is now considered to be possibly extirpated from the Aegean Sea, Tyrrhenian Sea, off the Balearic Islands and in the Catalan Sea, and is considered rare throughout the rest of its range in the northeast Atlantic. Because the demersal fisheries that historically contributed to the decline in smoothback angelshark are still active throughout the species’ range and primarily operate in depths where these angelsharks occur, the species remains at risk of overutilization.

The smoothback angelshark is listed as endangered under the Endangered Species Act.

In 2013, NOAA Fisheries received a petition to list the smoothback angelshark as threatened or endangered under the Endangered Species Act. In our 90-day finding, we concluded that the petitioned action may be warranted for the species. After completing a Status Review, we proposed to list the species as endangered and requested comments from the public. In 2016, NOAA Fisheries listed the smoothback angelshark as endangered under the Endangered Species Act.

We, NOAA Fisheries, issue a final rule to list three foreign marine angelshark species under the Endangered Species Act (ESA). We considered comments submitted on the proposed listing rule and have determined that the sawback angelshark (Squatina…
Final Rule
,
Foreign