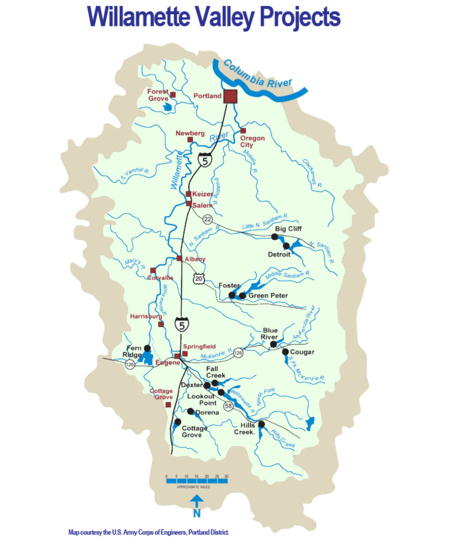 The Willamette Valley Flood Control Project consists of 13 dams in Oregon, operated by the U.S. Army Corps of Engineers (Corps). Most of these dams are "high head" dams that are over 250 feet tall. The primary purpose of the dams is to provide critical flood damage reduction for the entire Willamette Valley, including the cities of Eugene, Salem, and Portland. The dams also provide some hydroelectric generation (about 180 megawatts annually), along with recreational and fishing opportunities, water quality benefits, and municipal and irrigation water. The Willamette Project also includes maintenance of 42 miles of bank protection projects and operation of a hatchery mitigation program.

The Willamette Project has adversely affected Upper Willamette River Chinook salmon and steelhead by blocking access to a large amount of their historical habitat upstream of the dams and contributing to degradation of their remaining downstream habitat. The associated mitigation hatcheries that accompanied the dam building had an effect on the genetic diversity of Chinook salmon populations in the Willamette Basin. Other factors in the decline of Willamette salmon and steelhead include habitat degradation by other activities, hatchery effects, and harvest.

Reducing the adverse effects of the Willamette Project is one component of the Endangered Species Act (ESA) recovery plan for Upper Willamette River Chinook salmon and steelhead. NOAA Fisheries consulted with the U.S. Army Corps of Engineers, Bonneville Power Administration, and the U.S. Bureau of Reclamation (collectively, the Action Agencies) to evaluate the effects of the Willamette Project on these ESA-listed species, resulting in our Willamette River Biological Opinion.

In the Biological Opinion’s Reasonable and Prudent Alternative, NOAA Fisheries identified measures and timelines for completion that the Action Agencies must implement to reduce the Willamette Project’s effects. These measures include providing fish passage at three dams, temperature improvements downstream of another dam, improvements in downstream flows, screening of irrigation diversions, improving hatchery practices and facilities, and habitat improvement projects. In addition, the Action Agencies will carry out a series of research, monitoring, and evaluation measures to develop appropriate actions and evaluate their effectiveness.

A new entity called the Willamette Action Team for Ecosystem Restoration (WATER) fosters an ecosystem-wide perspective and cooperation among all concerned parties, including states and tribes. Five teams address implementation and adaptive management.

The Willamette Biological Opinion is not a long-term salmon recovery plan, but efforts to make the dams more fish-friendly, to improve river water temperatures, and to improve hatchery practices will measurably aid long-term recovery efforts. Please see the Upper Willamette River Recovery Plan to learn more about recovery for Chinook salmon and steelhead in the river.

In the Willamette Basin, there are four hatchery Chinook salmon programs, one hatchery summer steelhead program, and one rainbow trout program. All of these programs are funded by the Bonneville Power Administration, the U.S. Army Corps of Engineers, and the Oregon Department of Fish and Wildlife (ODFW), and are operated by ODFW using seven hatchery facilities in the Upper Willamette.

The primary purpose of these hatchery programs is to mitigate for fishery losses associated with the construction and continued operation of the 13 federal dams in the Willamette Basin. Hatchery fish provide important societal benefits in ocean and freshwater fisheries.

In the Willamette Valley basin, there are four hatchery Chinook salmon programs:

Chinook salmon in North Santiam River spawn, rear, and are released at the Marion Forks hatchery and Minto collection facility. Key actions in the Willamette Biological Opinion include:

Key actions in the Willamette Biological Opinion for the South Santiam hatchery at Foster Dam include using the hatchery program to reintroduce Chinook salmon back into historical habitat above Foster and Green Peter dams, preserving genetic resources of the historical population, and discontinuing the release of this stock into the Molalla River (developing a local stock).

For Middle Fork Willamette Chinook at the Willamette hatchery and Dexter collection facility, key actions in the Willamette Biological Opinion include using the hatchery program to reintroduce Chinook salmon back into historical habitat above Dexter, Lookout Point, and Hills Creek Dams.

For more information on these programs, visit the ODFW Hatcheries web page and our Upper Willamette Hatchery Programs page.

Operation of the Willamette Project impacts habitat that is important for healthy salmon and steelhead populations. It degrades rearing, holding, and spawning habitat below the dams, reducing the abundance and productivity of ESA-listed Upper Willamette Chinook salmon and Upper Willamette steelhead. Lack of upstream and downstream fish passage at the Willamette Project dams also prevent safe access to historical breeding and rearing habitat, restricting most of these fish to habitat below the dams.

A key habitat strategy of the Willamette Biological Opinion is to work with other partners in the basin to assess needs and identify and prioritize restoration projects. In addition, the Action Agencies will plan and carry out habitat restoration programs on off-site lands to protect and restore aquatic habitat to address limiting factors for ESA-listed fish.