After an earthquake and tsunami resulted in an accident at a nuclear power plant in Fukushima in March 2011, NOAA Fisheries tracked radiation levels in U.S West Coast tuna in order to better understand migration.

In March 2011, in association with the Great Tohoku earthquake and resultant tsunami, there was an accident at the Fukushima Daiichi nuclear power plant on the east coast of Japan. This accident released the radionuclides cesium 134Cs and 137Cs into the ocean next to the plant, exposing marine life to radioactive materials. 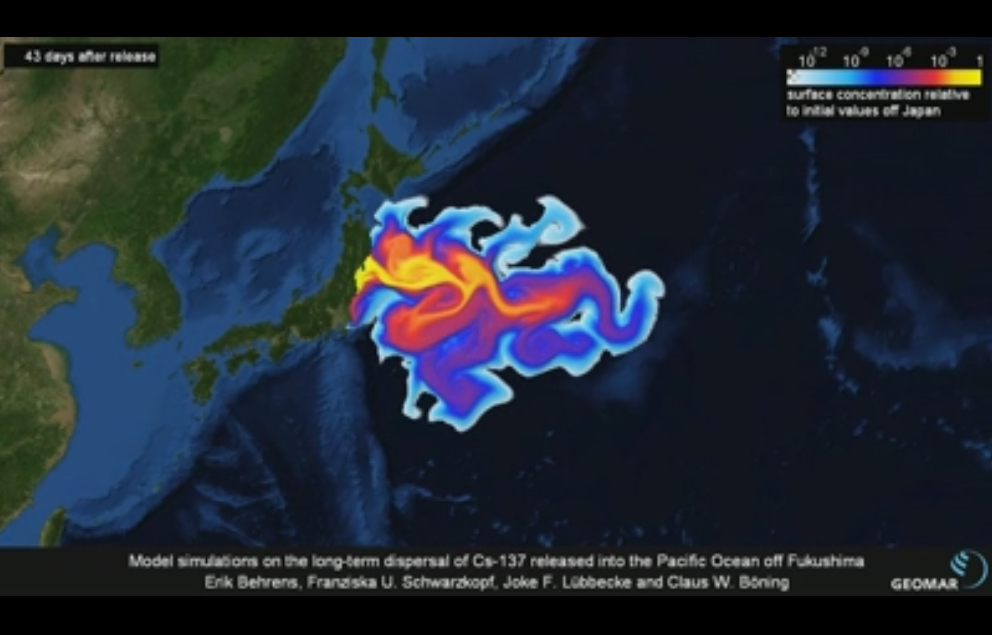 Pictured here are model simulations (using dye) on the long-term dispersal of 137Cs released into the Pacific Ocean off Fukushima following the Daiichi nuclear accident, 43 days, 367 days, and 1412 day after. While many of the exposed marine organisms remain around Japan, a number of species are highly migratory and swim across the North Pacific to the West Coast of North America. 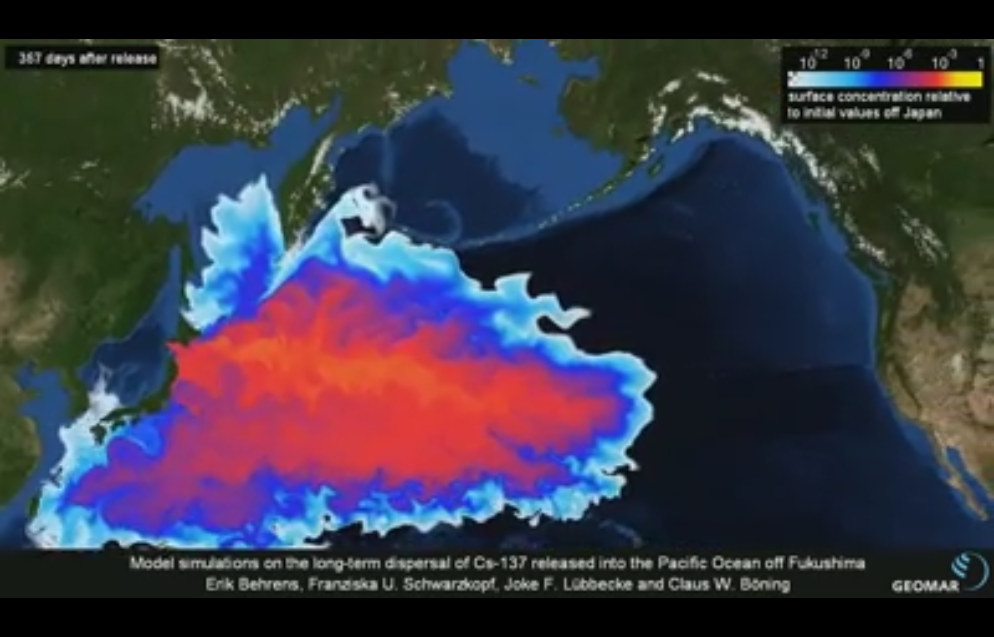 Two examples of these migratory fish are Pacific bluefin tuna (Thunnus orientalis) and albacore tuna (Thunnus alalunga), and both 134Cs and 137Cs have been detected in these species caught in the eastern Pacific. For public health, the levels of radiation are very low and far below levels that are considered cause for concern. 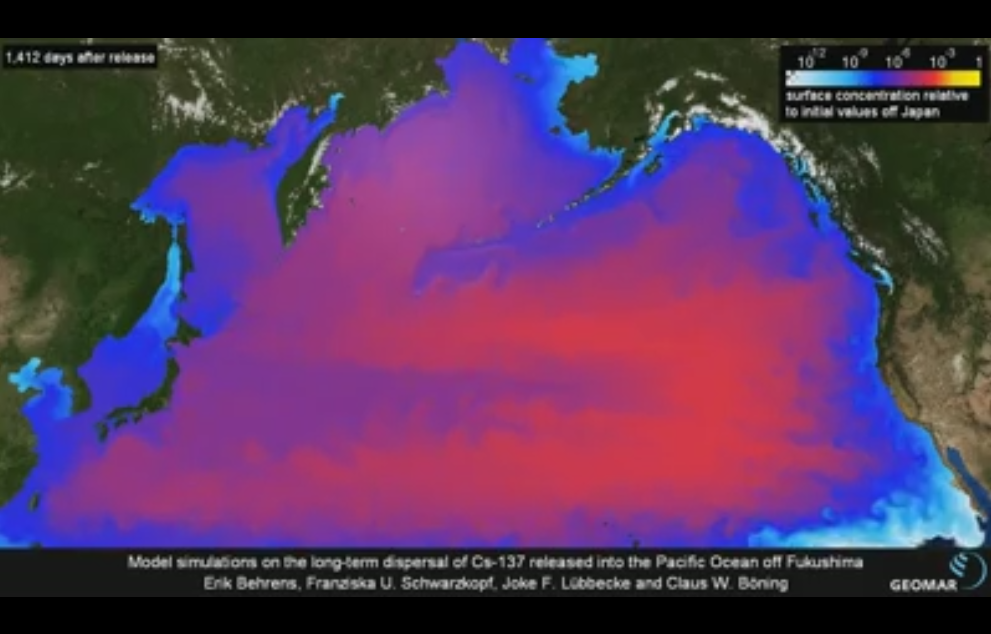 For scientists the 134Cs and 137Cs served as a marker indicating migratory pathways. If, for example, a Pacific bluefin tuna had detectable levels of 134Cs (which decays relatively quickly), it indicated that they recently migrated from Japan. This has provided important insight into the dynamics of tuna migration in the Pacific.

By definition, radiation is energy in the form of waves or energized particles. The two types are:

Where Does Radiation Exposure Come From?

Radiation has always been a natural part of our environment, with sources in the soil, water, and air. Man-made sources include mining, power generation, nuclear medicine, military applications, and consumer products. According to the National Council on Radiation Protection and Measurements (NCRP), the average person in the U.S. is exposed to an average annual radiation dose of 620 millirem (6.2 millisieverts), which is not considered harmful.2

The term background radiation refers to the radiation that is always present in the environment, mostly from natural sources and a small portion from man-made sources. Use this Personal Annual Radiation Dose Calculator from the U.S. Nuclear Regulatory Commission to see what your personal exposure is.

What is Radioactive Decay and a Half-life?

Radioactive decay is defined as the process by which a radionuclide releases energy (in the form of alpha particles, beta particles, or gamma rays) over time, transforming into a different state until the element is stable again. As they decay, radionuclides may transform into different elements completely. The half-life is the rate at which a radionuclide decays to half its original atoms and is measured as time, ranging from mere seconds, minutes, or millions of years.3

How Do Radioactive Materials Impact Humans?

The severity of the impact of radiation depends on the exposure, either chronic (continuous exposure over a long period of time) or acute (short-term exposure). Radioactive materials that release energy in the form of ionizing radiation may cause damage to living cells by changing the state of atoms inside genetic material, in turn causing mutations to DNA. However, type of exposure is important (internal vs. external), the dose, the radionuclide's half-life, where it concentrates in your body, and how your body metabolizes it.

Experts disagree on the exact definition and degree of "low-dose" exposure, but the protection standards for the U.S. conservatively assumes that any exposure to radiation carries some risk and risk increases with dose.3

What Are Cesium Isotopes?

137Cs and 134Cs are radionuclides produced by nuclear fission for use in medical devices and gauges and is also one of the byproducts of nuclear fission processes in nuclear reactors and nuclear weapons testing.

137Cs and 134Cs were already present in the environment before the Fukushima Nuclear Disaster due to nuclear testing in the 1950s and 1960s, nuclear fuel reprocessing in the 1980s, and the Chernobyl accident in 1986. However, the accident in 2011 supplements these established sources, and the long half-life of 137Cs (30.04 years) means it will persist in the environment for quite some time when compared to that of 134Cs (2.07 years).

How Does Radiocesium Impact Fish?

The concern for 137Cs in the marine environment is due to its intake and diffusion into fat content in biological tissue of fish and the potential for bio-accumulation through the food web. Marine fish have been shown to acquire Cs from both the aqueous phase and from diet.5

Of fifty bluefin tuna sampled off the U.S. West Coast in 2012, the smaller bluefin (recent migrants from Japan) had 134Cs (0.7 ± 0.2 Bq/kg) and elevated 137Cs (2.0 ± 0.5 Bq/kg) in their white muscle tissue, while most larger, older fish had no 134Cs and only background levels of 137Cs. For scientists, the radionuclides serve as a marker indicating migratory pathways. If, for example, a Pacific bluefin tuna had detectable levels of 134Cs (which decays relatively quickly), it indicated that they recently migrated from Japan.