Copepods drift with the ocean currents making them good indicators of the origins of water transported into the northern California Current (NCC). Copepod biodiversity (or species richness) measures the number of copepod species in a plankton sample. We can use species richness to index the types of water masses present in Oregon and Washington's coastal zone.

Off the Oregon and Washington coasts, species richness is low in the summer when sub-Arctic waters dominate and naturally contain zooplankton assemblages of low diversity (Figure CB-01; Hooff and Peterson, 2006). Alternatively, coastal waters are fed by the poleward flowing Davidson Current during the winter. The current brings a highly diverse assemblage of subtropical copepods to the NCC.

We use the monthly copepod richness anomaly (seasonal cycle removed) from May through September—the strongest upwelling period in the NCC—to index the biological response to climatological indices during the summer upwelling months (Figure CB-02).

Although copepod richness changes seasonally, basin-wide processes, indexed by climatological indices such as the PDO and ENSO, can also influence coastal waters richness. During negative (cool) periods of the PDO, species richness is low. During warm events, when the PDO is positive (warm), or during El Niño events, species richness is high (Hooff and Peterson, 2006).

Significantly, two cold-water species found in the northern copepod index are lipid-rich Calanus marshallae and Pseudocalanus mimus. Therefore, by indexing northern copepod biomass, we may also track the amount of lipid (wax–esters and fatty acids) transferred up the food chain (Miller et al. 2017). These fatty compounds appear essential to the growth and survival of many pelagic fishes.

We use the copepod community composition to track the seasonal and interannual changes in the copepod species. We base this indicator on an ordination technique called multidimensional scaling (MDS), which visually represents how similar the copepod community is among plankton samples. Figure CCI-01 shows the X- and Y-axis scores from the MDS averaged from May - September for each year.

Years dominated by cold water copepods cluster on the negative X-axis. Years dominated by warm water copepod species cluster on the positive X-axis. This relationship seems to be related to the PDO and alongshore advection, as shown in Figure CCI-02. A negative–phase PDO results in more boreal water coming into the NCC, and, therefore, more cold-water copepods (negative axis score). Alternatively, a positive–phase PDO results in more subtropical water coming in either from the south (as during the large El Niño events of 1983 and 1998) or offshore (as during the El Niño–like event of 2005), resulting in more warm-water copepods (positive axis score).

We define the date of the biological spring transition each year as the day when the copepod community has changed from a winter (southern, warm-water) community to a summer (northern, cold-water) community.

We suggest that the timing of the summer copepod community may be a more useful indicator of the spring transition from downwelling to upwelling. The onset of the summer copepod community indicates the first appearance of the food most favorable for salmon, sardines, and sablefish. Large, lipid-rich copepods, euphausiids, and juvenile forage fish dominate this community and help fuel a productive, lipid-rich food web.

Alternatively, the arrival of the winter copepod community marks the fall transition and the end of the upwelling season. 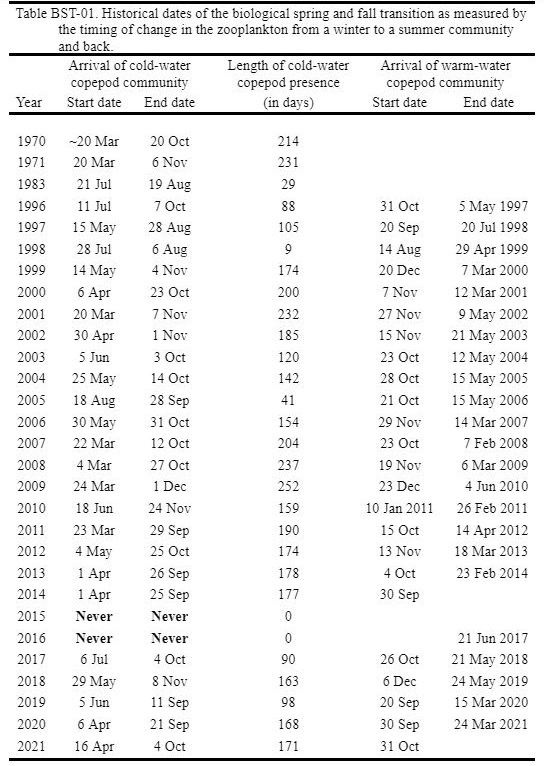 Download the raw data file (.CSV) or view below. 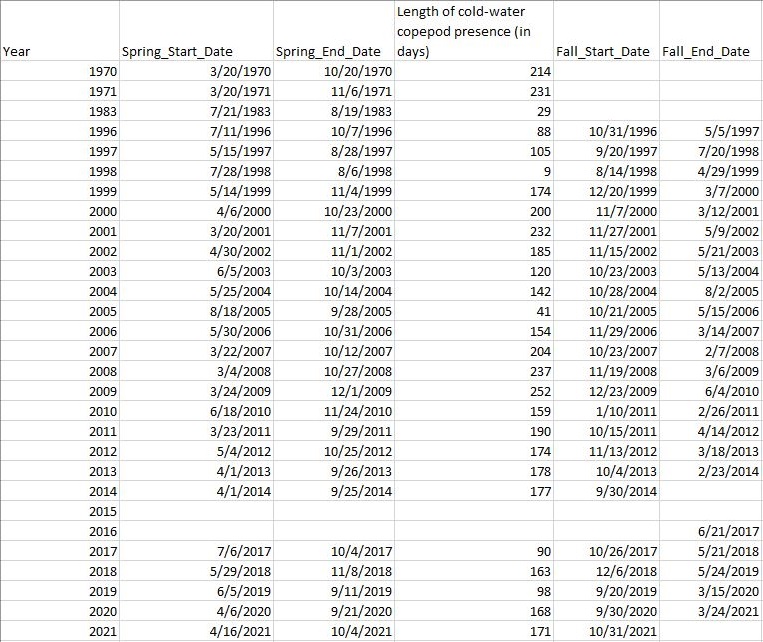 Most marine fishes in the NCC spawn in late winter and early spring (Brodeur et al., 2008). Winter-spawned fish larvae that grow and survive through spring provide a food base for juvenile coho and Chinook salmon and steelhead during their first marine summer and are easier to sample than their older counterparts. By tracking winter-spawned fish larvae, we developed a winter ichthyoplankton biomass indicator as a proxy for potential food available to juvenile salmonids during their early marine, critical growth period (Daly et al., 2013). 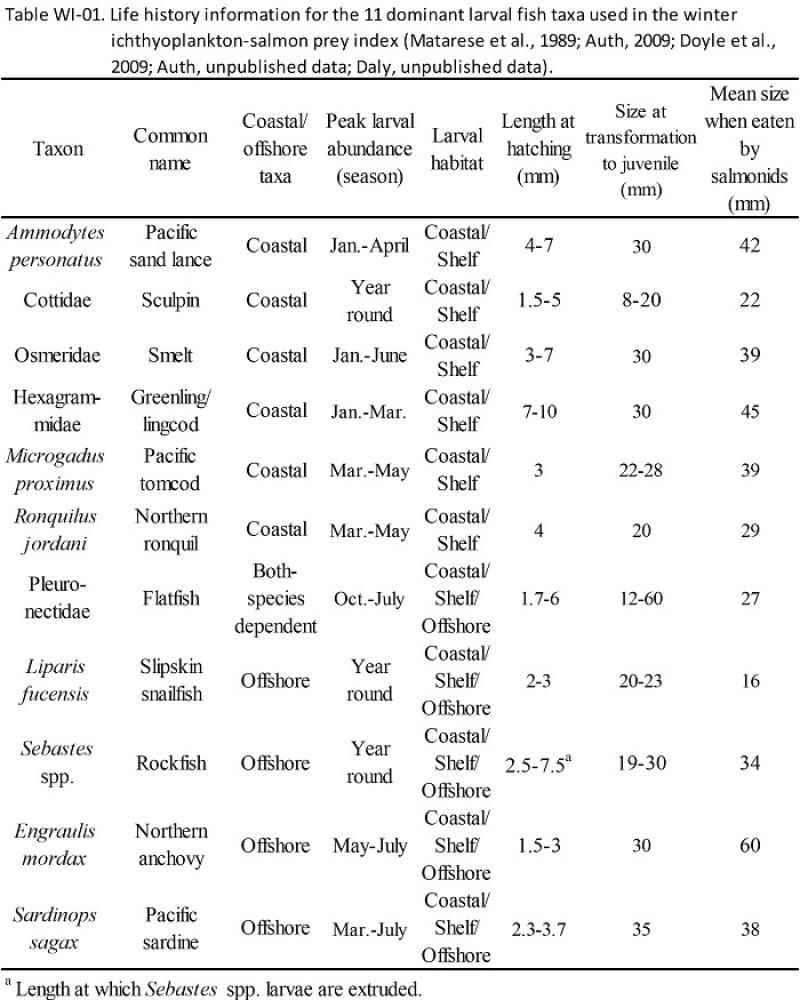 Figure WI-01 shows the total winter ichthyoplankton biomass composed of food items for juvenile salmonids and the proportion of the total composed of nearshore versus offshore taxa.

The ichthyoplankton biomass of nearshore species is typically higher during colder ocean conditions with a higher biomass of taxa such as larval Pacific sandlance, smelts, and sculpins. Alternatively, the nearshore ichthyoplankton community can shift to a higher composition of larval rockfish, anchovies, and sardines during warmer ocean conditions.

The number of juvenile salmon caught during our surveys can serve as an index, or surrogate measure, of ocean survival for yearling Chinook and coho salmon.

We have observed the highest average juvenile Chinook and coho salmon abundance during May cruises in the Columbia River vicinity. In May, we rarely catch subyearling (fall) Chinook salmon (Figure JSS-02).

In June, we see the highest average abundance in the vicinity of the Columbia River and off the Washington coast (Figure JSS-02).

Coho salmon distribution has been more widespread, whereas both yearling and subyearling Chinook salmon were far less common off Oregon than Washington.

Catches in all months were very patchy. We generally caught half of the fish in ~5% of the trawls per cruise and did not catch any fish in 40% of the trawls (Peterson et al. 2010). Patches most generally occurred for both yearling Chinook and coho salmon off the Columbia River and the Washington coast in May and June (Figure JSS-02) and very near shore for yearling and subyearling Chinook salmon in September.

The lowest June catches of Chinook and coho salmon were associated with:

Conversely, the highest June catches occurred during years with a negative signal (cold phase) of the Pacific Decadal Oscillation (1999-2003 and 2008-2013).

Ocean Indicators of Pacific Salmon on the West Coast