An introduction to the ocean ecosystem indicators of Pacific salmon marine survival project.

As many scientists and salmon managers have noted, variations in marine survival of salmon often correspond with periods of alternating cold and warm ocean conditions. For example, cold conditions are generally good for Chinook (Oncorhynchus tshawytscha) and coho (O. kisutch) salmon, whereas warm conditions are not. 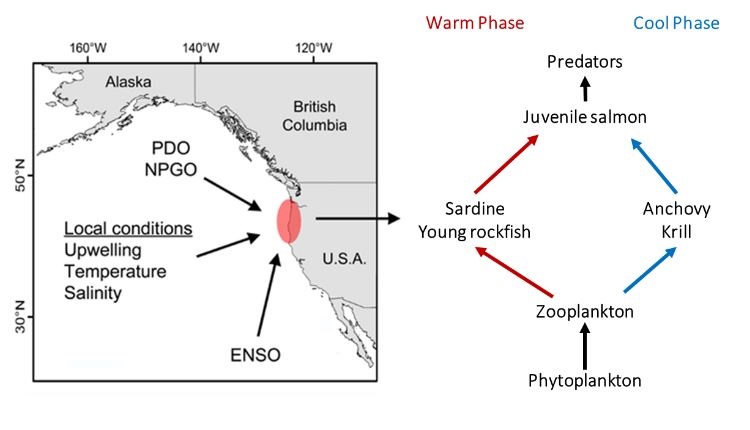 We developed a suite of physical and biological indicators spanning different times and places. These indicators help us understand better the linkages between climate variability and the growth and survival of juvenile salmon. These indicators characterize ocean conditions experienced by juvenile salmon in the northern California Current. They offer new insight into the mechanisms that lead to the success or failure of adult salmon runs. Biological indicators, for example, are directly linked to the success of salmon during their first year at sea through food–chain processes.

We have derived these indicators from:

Our 25-year time series spans a wide range of ocean conditions, allowing us to observe how salmon and other ecosystem components respond to, and recover from, short-term climate variability. For example, sampling has occurred during alternating warm and cold phases of the Pacific Decadal Oscillation.

Sampling across climate extremes has provided many insights into ocean conditions' role in controlling the survival and growth of coho and Chinook salmon.

In addition to salmon return outlooks, the indicators presented here may be useful to those trying to understand how variations in ocean conditions might affect the recruitment of fish stocks, seabirds, and other marine animals. We reiterate that trends in salmon survival track regime shifts in the North Pacific Ocean. These shifts are transmitted up the food chain in a more-or-less linear and bottom-up fashion:

The same regime shifts that affect Pacific salmon also affect the migration of Pacific hake and the abundance of sea birds, both of which prey on migrating juvenile salmon. Therefore, climate variability can also have "top-down" impacts on salmon through predation by hake and sea birds (terns and cormorants). We are actively engaged in research to address "bottom-up" and "top-down" linkages.

Back to Ocean Ecosystem Indicators of Pacific Salmon on the West Coast.