Fisheries locations on the map and the fisheries descriptions available by the links below are intended to provide a general overview of the U.S. fisheries that catch highly migratory species and make landings along the U.S. West Coast. For specific details on West Coast highly migratory fisheries and their management, refer to published data sets made available annually in the Council's highly migratory species stock assessments and fishery evaluations (SAFE) documents, or regulations published in the Federal Register and codified in the Code of Federal Regulations, see 50 CFR part 300 and 50 CFR Part 600.

For more information or questions on Permits, contact wcr-permits@noaa.gov or 562.980.4238. 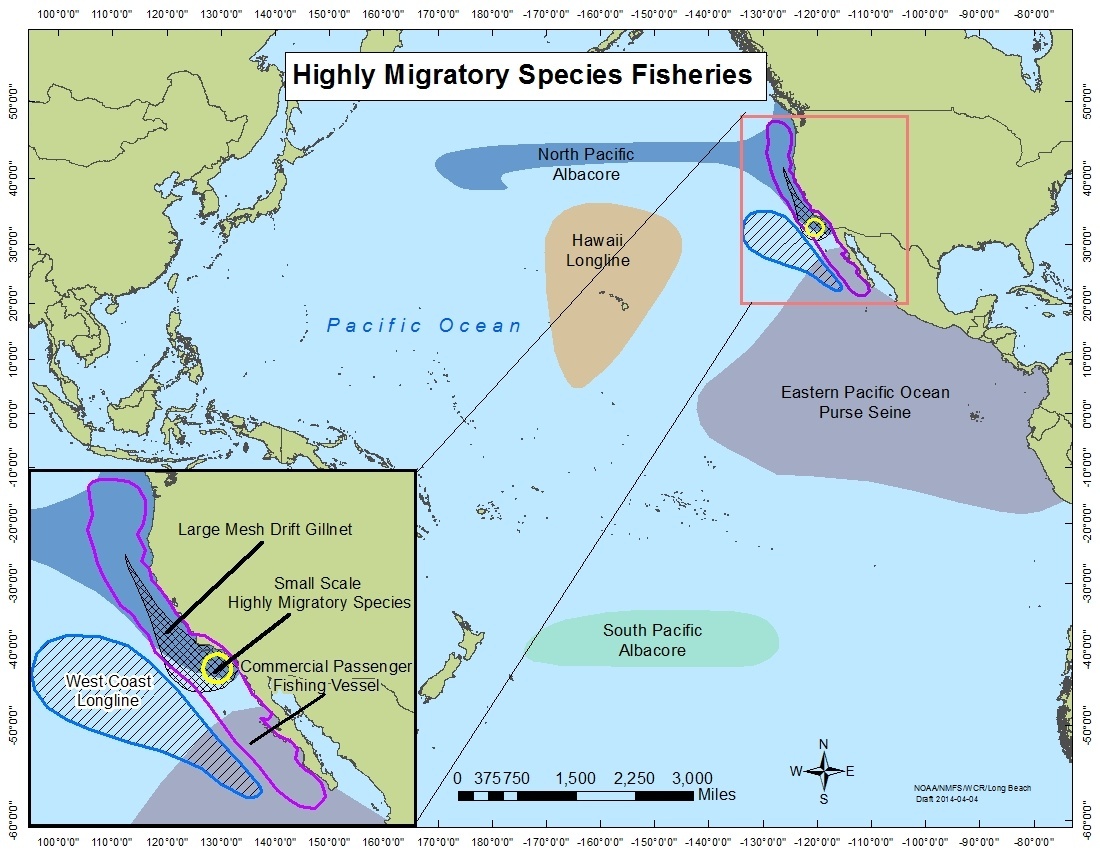 A number of anglers recreationally fish for highly migratory species (HMS) on CPFVs. CPFVs in Oregon and Washington often target North Pacific albacore tuna, while vessels fishing in waters off California target yellowfin tuna, Pacific bluefin tuna, albacore tuna, and dorado (dolphinfish or mahi mahi). A significant portion of HMS landed in California are also caught in the waters off Mexico on the aptly named “long-range” boats. Other HMS species captured on CPFV trips, though relatively infrequently, include thresher and mako shark. The CPFV fleet operates year round, but has a peak HMS fishing season in spring and summer. CPFVs come in all sizes, from the 20 foot “4-pack” to the 60 foot “party boat.” On average, there have been over 200 CPFVs permitted to conduct trips targeting HMS at any point during the year. In recent years, anglers have been able to catch HMS species during any month of the year. Anglers are subject to recreational fishing bag limits with their catches constrained to boats limits for some species.

Recreational anglers typically use hook-and-line (rod and reel or pole-and-line), which is a hand-held fishing rod with a manually or electrically operated reel attached, though some anglers successfully target HMS using spearfishing gear. 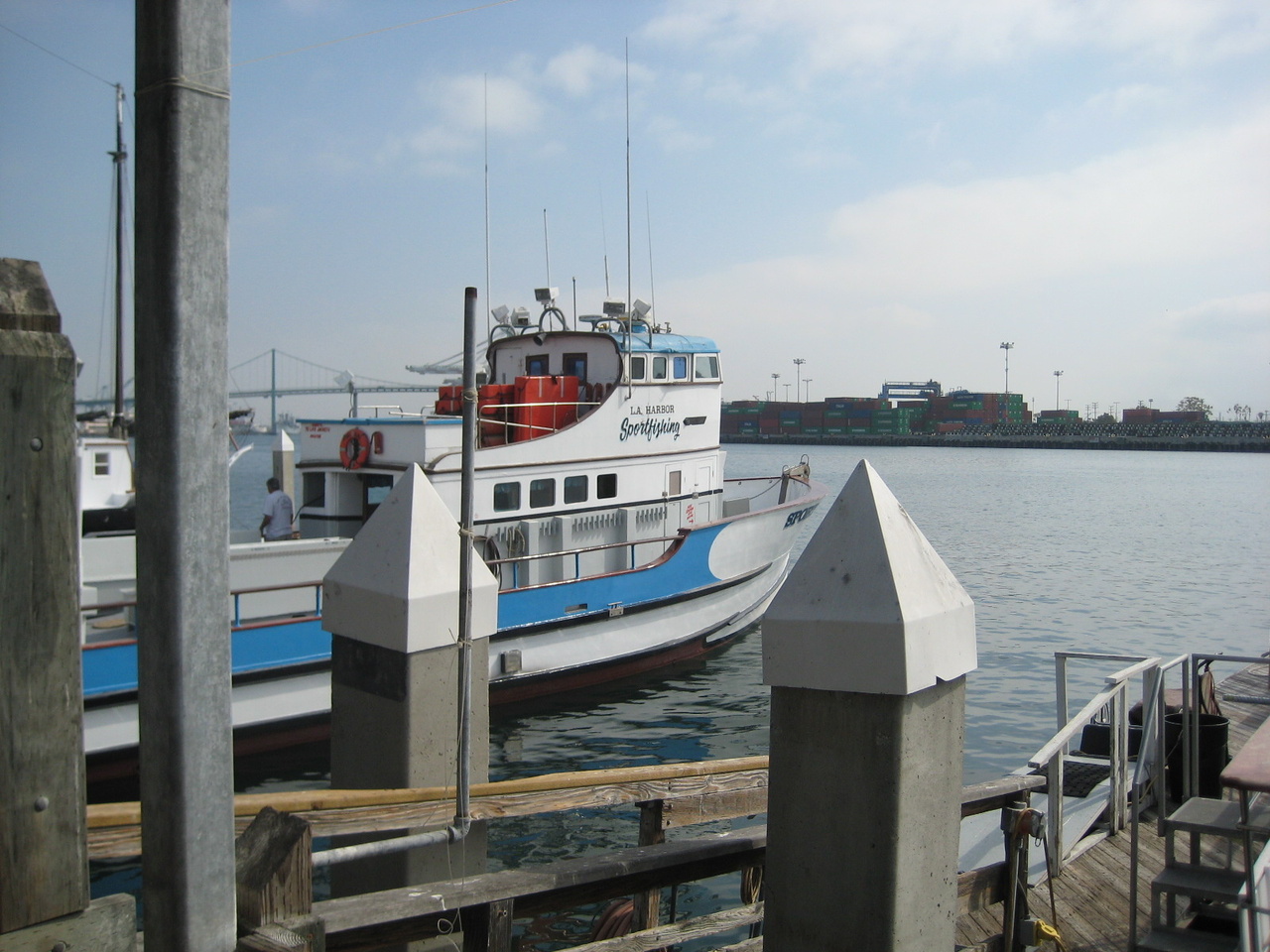 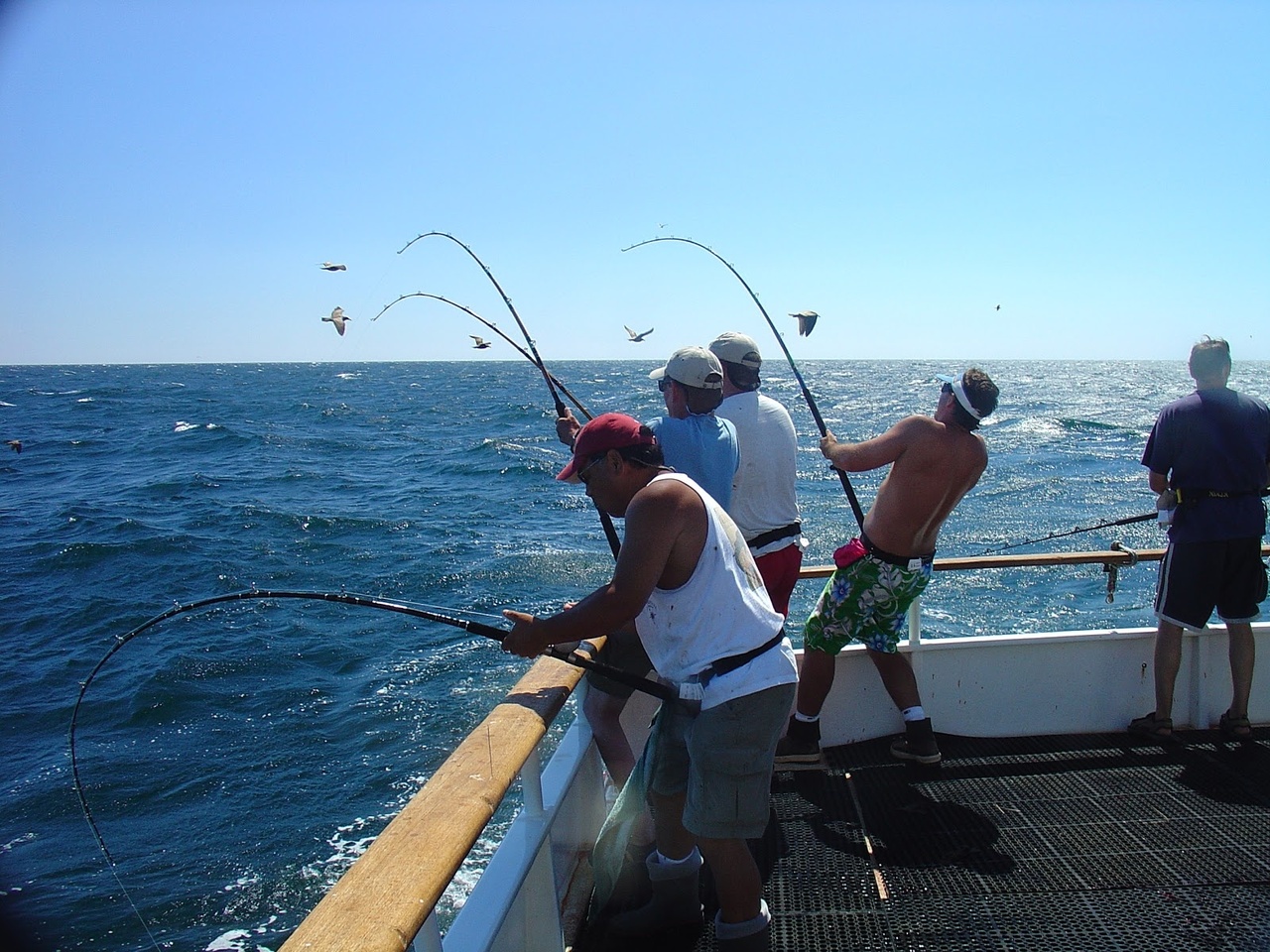 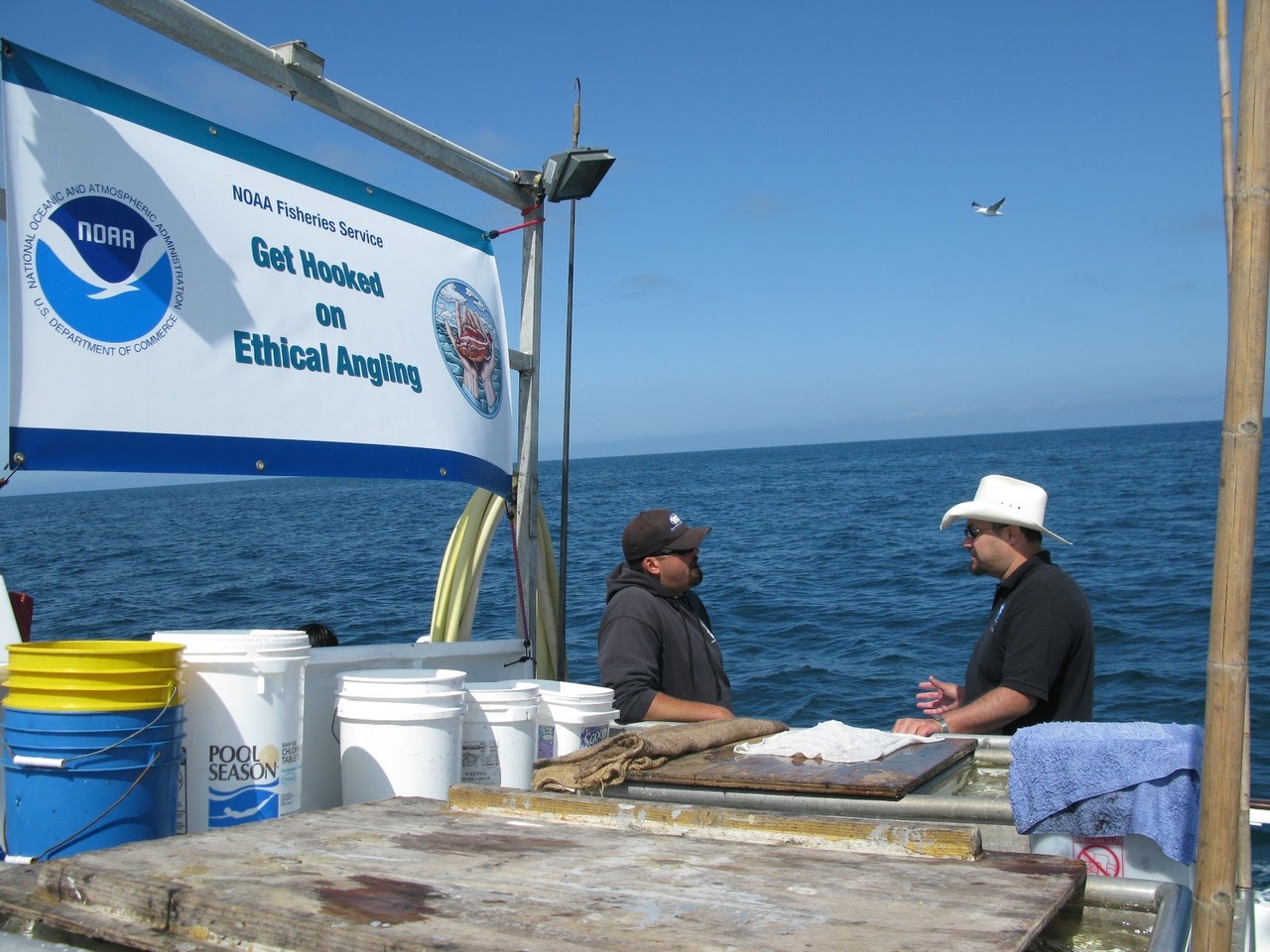 There are two components to the U.S. tuna purse seine fishery in the eastern Pacific Ocean: (1) large purse seine vessels (greater than 425 cubic meters), and (2) coastal purse seine vessels with smaller fish hold volumes (between 54-212 cubic meters) that are based on the U.S. West Coast and only opportunistically fish for tunas. A purse seine net includes floats and weights and is used to encircle schools of fish. The net is enclosed using a purse line threaded through rings attached to the bottom of the net.

Coastal (small-scale highly migratory species): Small coastal purse seiners, less than 510 cubic meters in carrying capacity, primarily target pelagic species including Pacific mackerel, Pacific sardine, anchovy, and market squid. Some of these vessels also target Pacific bluefin, yellowfin, and skipjack tunas when those species enter coastal waters of the southern California Bight, typically from May to October. From 2002 to 2012, the number of vessels participating in this fishery ranged from 1 to 11, landing approximately 3,500 metric tons of highly migratory species, with a value for the fishery of approximately $3.3 million. 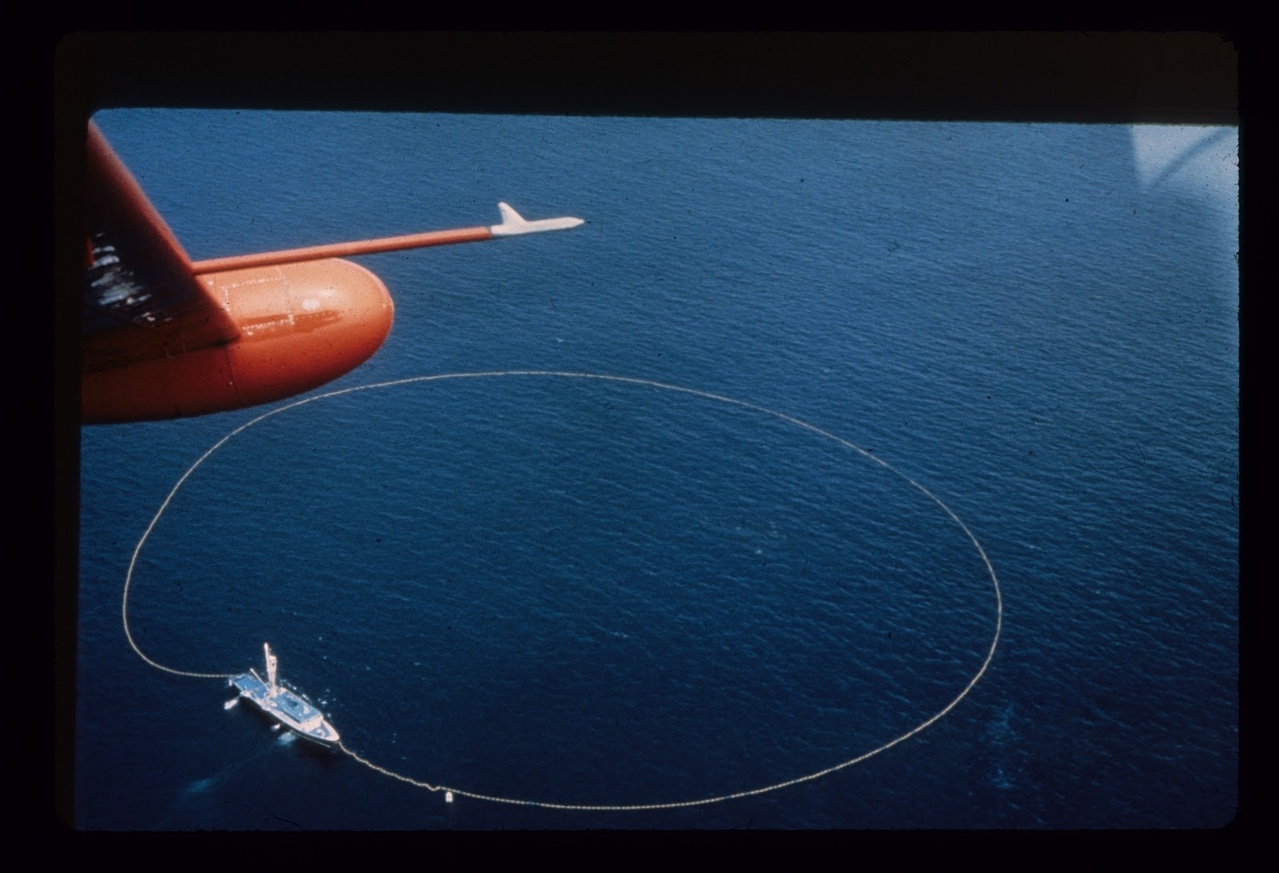 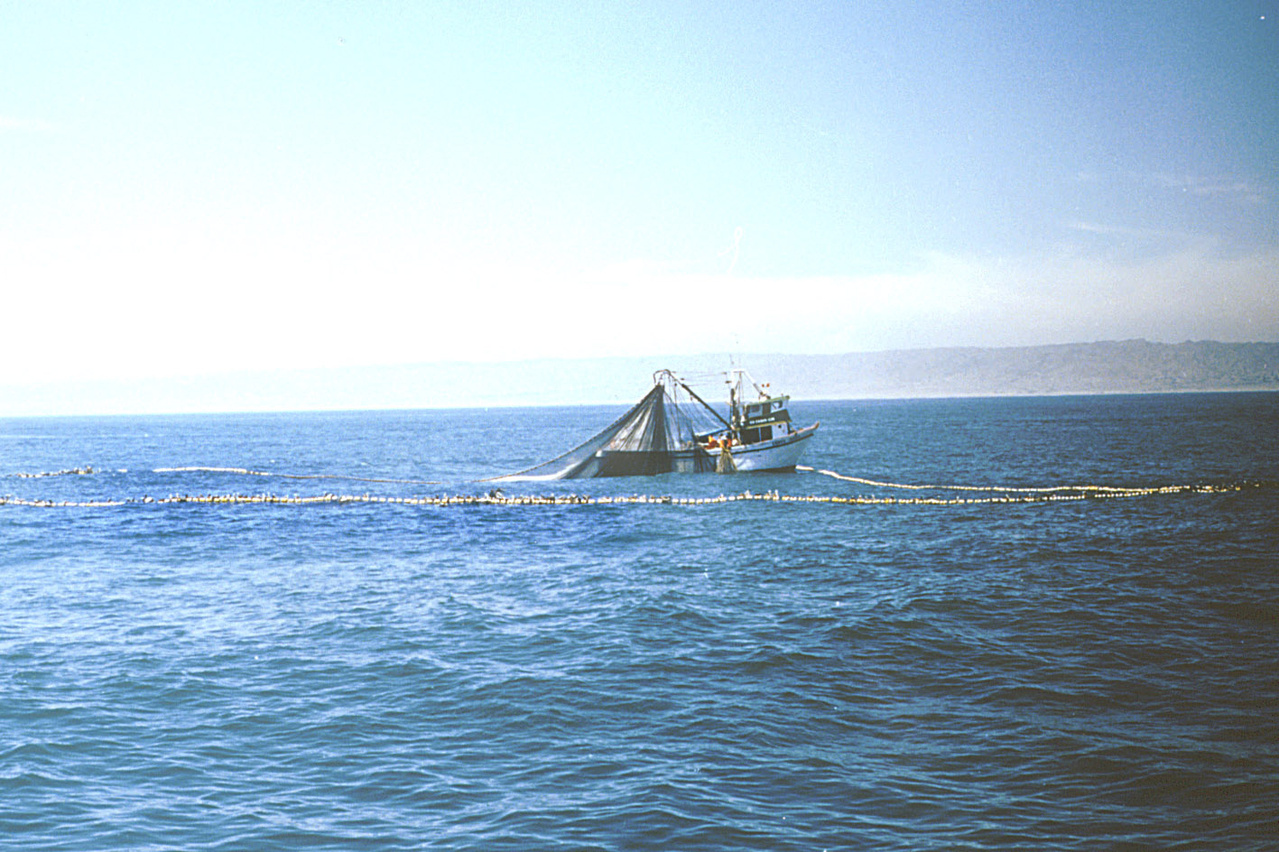 The West Coast large mesh drift gillnet fishery primarily targets and harvests swordfish, but also harvests other commercially valuable species such as thresher and mako shark, and opah. The majority of the drift gillnet fishing occurs from mid-August through January.

The fishery operates under a limited entry permit system with mandatory gear requirements and time-area closures, including the Pacific Leatherback Conservation Area Closure (PLCA) which prohibits drift gillnet fishing from August 15 to November 15 in roughly 213,000 square miles within the exclusive economic zone (EEZ). The PLCA was implemented by NOAA Fisheries in order to protect endangered leatherback sea turtles during the period when they are foraging off the West Coast.

Since the PLCA was enacted in 2001, the number of active participants in the fishery has declined from over 75 vessels in 2001 to approximately 21 in 2018.

A drift gillnet is an unanchored panel of stretched mesh (14 inches or greater) suspended vertically in the water by floats along the top and weights along the bottom. Regulations require large mesh drift gillnets fishing off the West Coast to be equipped with acoustic pingers and net extenders. These regulations were recommended by the Pacific Offshore Cetacean Take Reduction Team to minimize drift gillnet interactions with marine mammals. 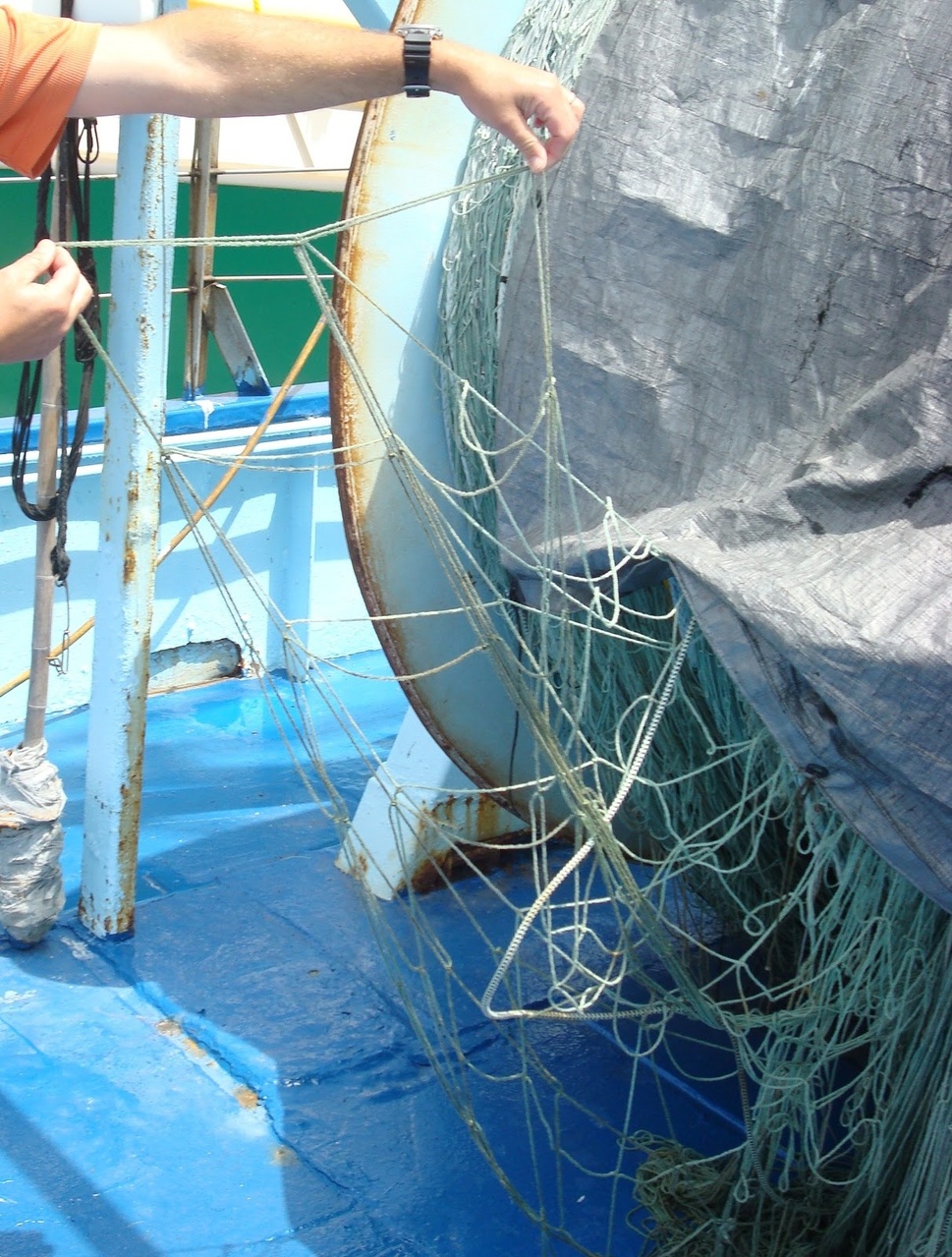 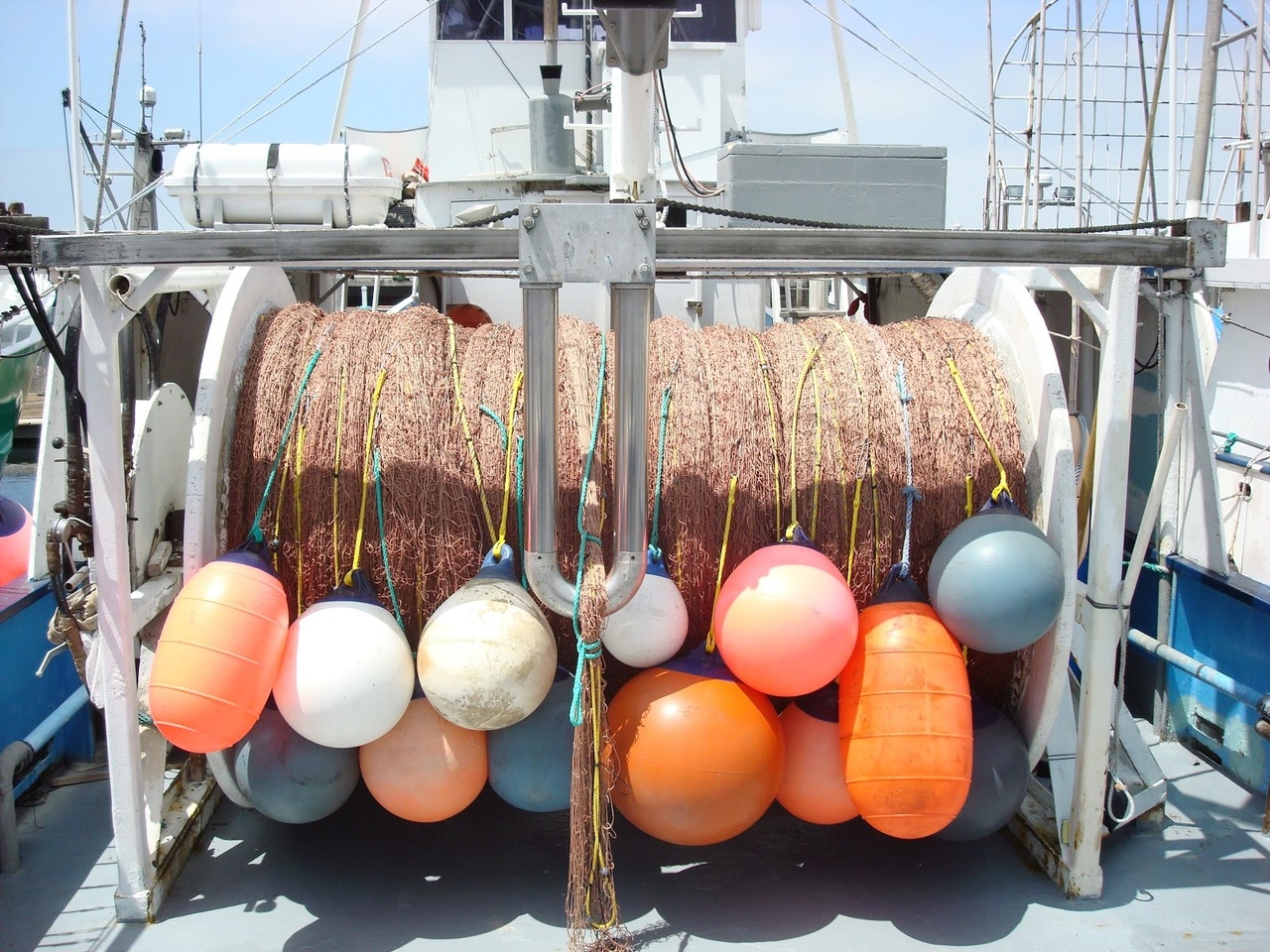 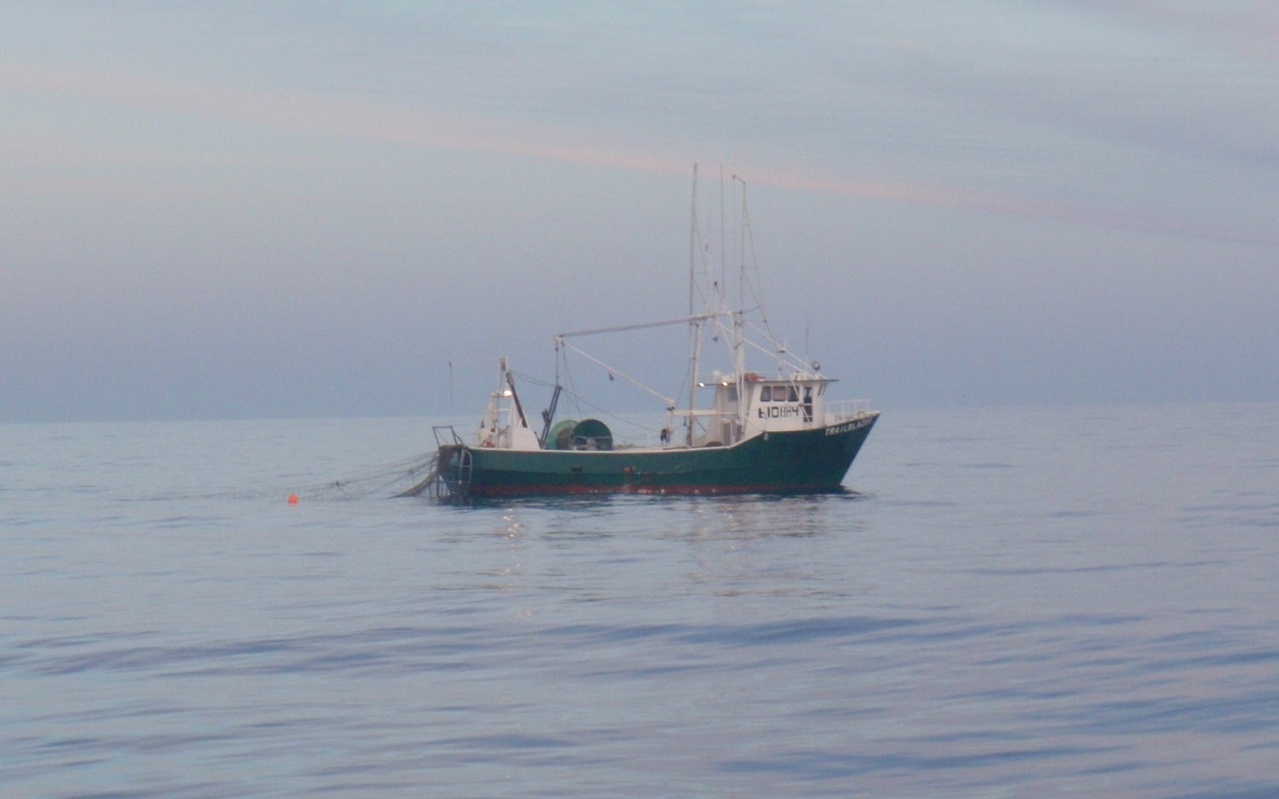 Deep-set buoy gear (DSBG) targets swordfish primarily from June through December. DSBG is a hook-and-line fishing gear that targets swordfish at depths between 200m and 400m during daylight hours. A surface buoy array allows for strike detection. Vessels may use up to 30 hooks at a time and must remain near the fishing gear to actively tend to the gear.

Beginning in 2011, a series of research fishing trials were conducted off the U.S. West Coast to develop this gear type. This initial research indicated that both standard and linked DSBG were effective for selectively targeting swordfish, with lower bycatch and protected species interactions than other common gear types such as drift gillnet and longline. These promising results led the Pacific Fishery Management Council (Council) to recommend that NOAA Fisheries issue exempted fishing permits (EFPs) to fishermen to expand testing of DSBG off of California and Oregon.

EFP fishing began in 2015, with approximately six vessels using DSBG through 2017. In 2018, approximately 27 vessels fished with DSBG under EFPs, landing 66.9 metric tons of swordfish round weight, and earning a total of $610,102 in revenues.

In September 2019, the Council made a final recommendation to NOAA Fisheries to authorize DSBG as a legal gear type under the Highly Migratory Species Fishery Management Plan. NOAA Fisheries is working to implement this recommendation. In the meantime, DSBG fishing continues under EFPs. 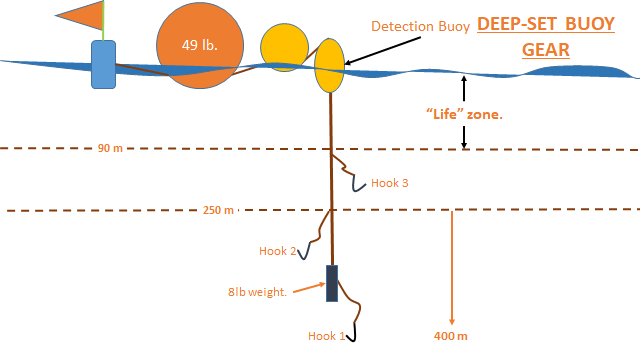 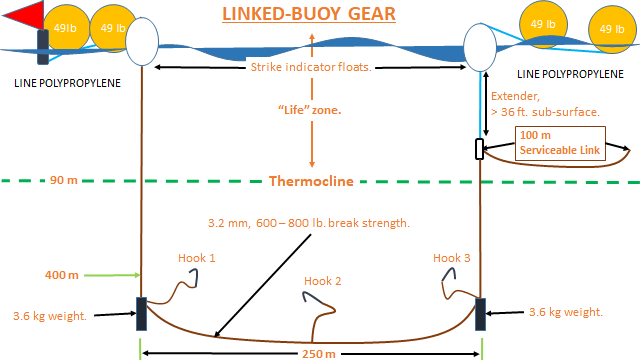 West Coast-based: This fishery targets bigeye and yellowfin tunas using deep-set longline gear during fall and winter. U.S. West Coast-based vessels must fish on the high seas outside of the exclusive economic zone (EEZ). The use of shallow-set longline gear is prohibited, both within the EEZ and on the high seas, under the Fishery Management Plan for U.S. West Coast Fisheries for Highly Migratory Species (HMS FMP). Tuna landings and ex-vessel value information for this sector is confidential and cannot be disclosed as less than 3 vessels have participated in the fishery since 2005.

Hawaii-based: This longline fleet offloads in California during the fall and winter and in Hawaii during the spring and summer. It is managed by NOAA Fisheries Pacific Islands Regional Office and the Western Pacific Fishery Management Council, and often fishes in the eastern Pacific Ocean.

A longline is comprised of a dropper line which suspends a drifting main line that extends horizontally in the water column from which gangion lines with hooks are attached. 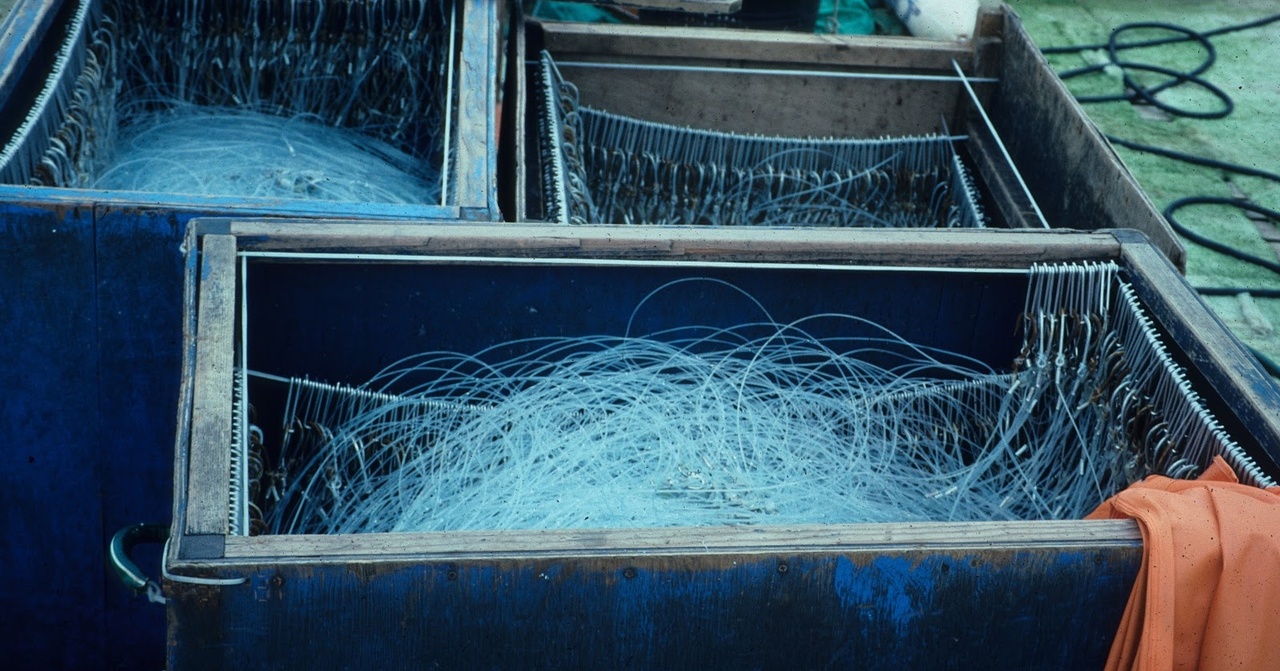 North Pacific: This fishery operates across the North Pacific and along the U.S. West Coast, both inside and outside of the U.S. exclusive economic zone (EEZ). Fishing typically takes place from June through October annually. The U.S. commercial vessels that fish for albacore use troll/jig gear (surface hook-and-line) and pole-and-line gear (baitboat). The United States - Canada Albacore Treaty extends U.S. fisherman access to fish in Canadian waters and Canadian fisherman access to fish seaward of 12 miles offshore of both nations. From 2013-2017, an annual average of 589 vessels permitted by the United States and Canada participated in this fishery and landed an annual average of 10,859 metric tons of albacore with an average annual value for the fishery of approximately $36.2 million.

Trolling vessels like the ones below, attach 10-20 fishing lines of various lengths to the outriggers to target albacore tuna. 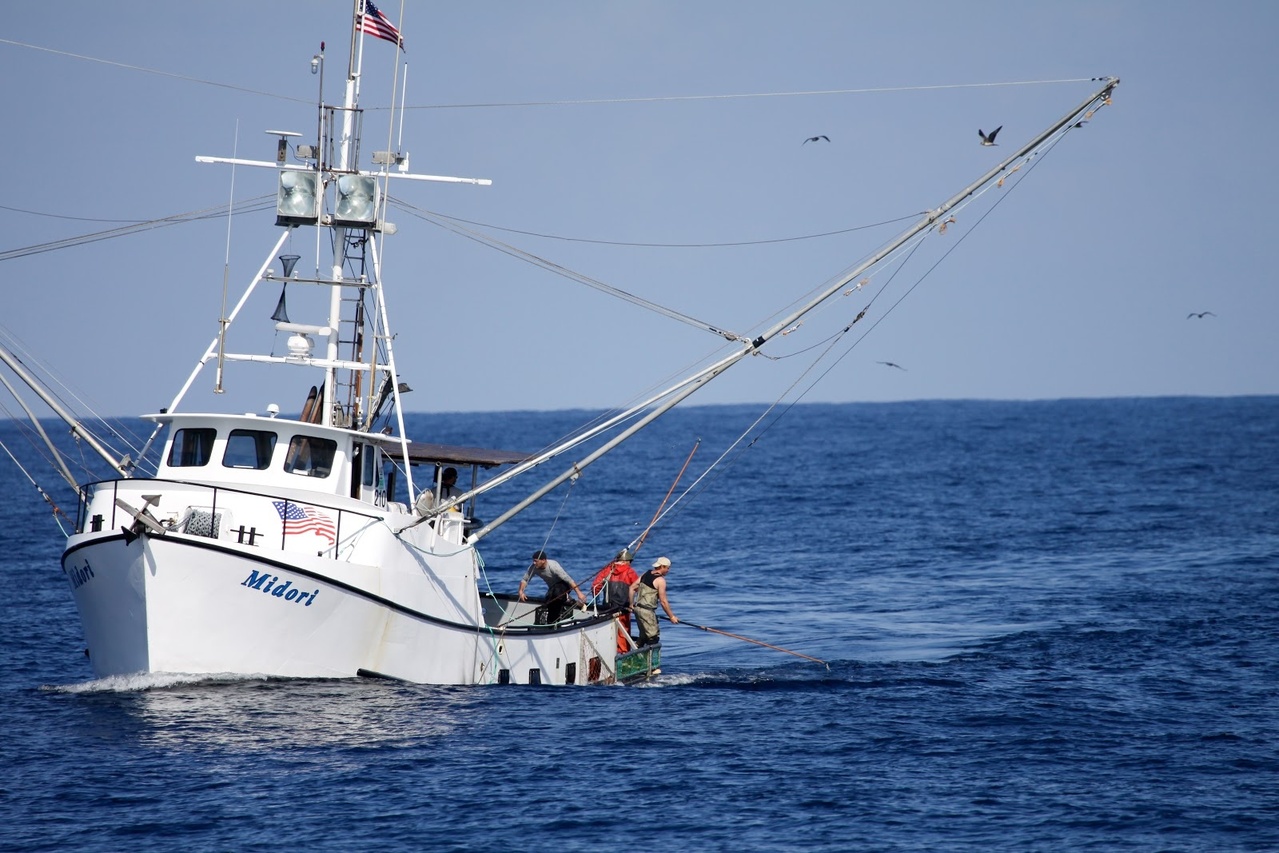 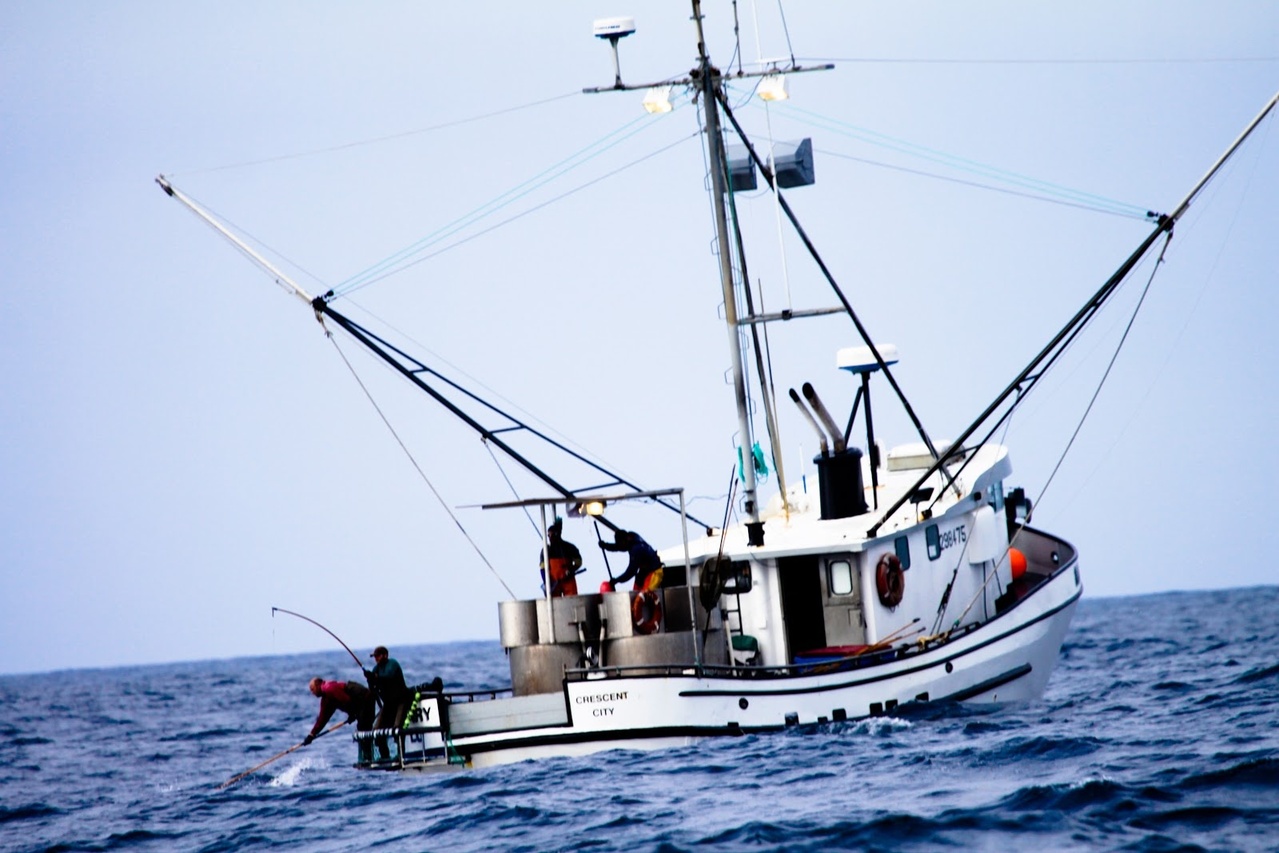 The harpoon fishery targets swordfish basking in surface waters. These fish are mainly encountered within the Southern California Bight from May through December, with the peak season occurring between July and September. From the 1900s to 1980s harpoon gear was the primary gear for harvesting swordfish, but in the early 1980s many fishermen switched to large mesh drift gillnet. In 2018, 14 vessels landed approximately 10 metric tons of swordfish with a value for the fishery of about $132,000.

Harpoon gear includes a pole or stick that is propelled only by hand, and not by mechanical means. The gear consists of either a pointed dart or iron attached to the end of the line several hundred feet in length. The other end is attached to a floatation device. Spotter planes are sometimes used to assist harpoon fishermen in locating basking swordfish. 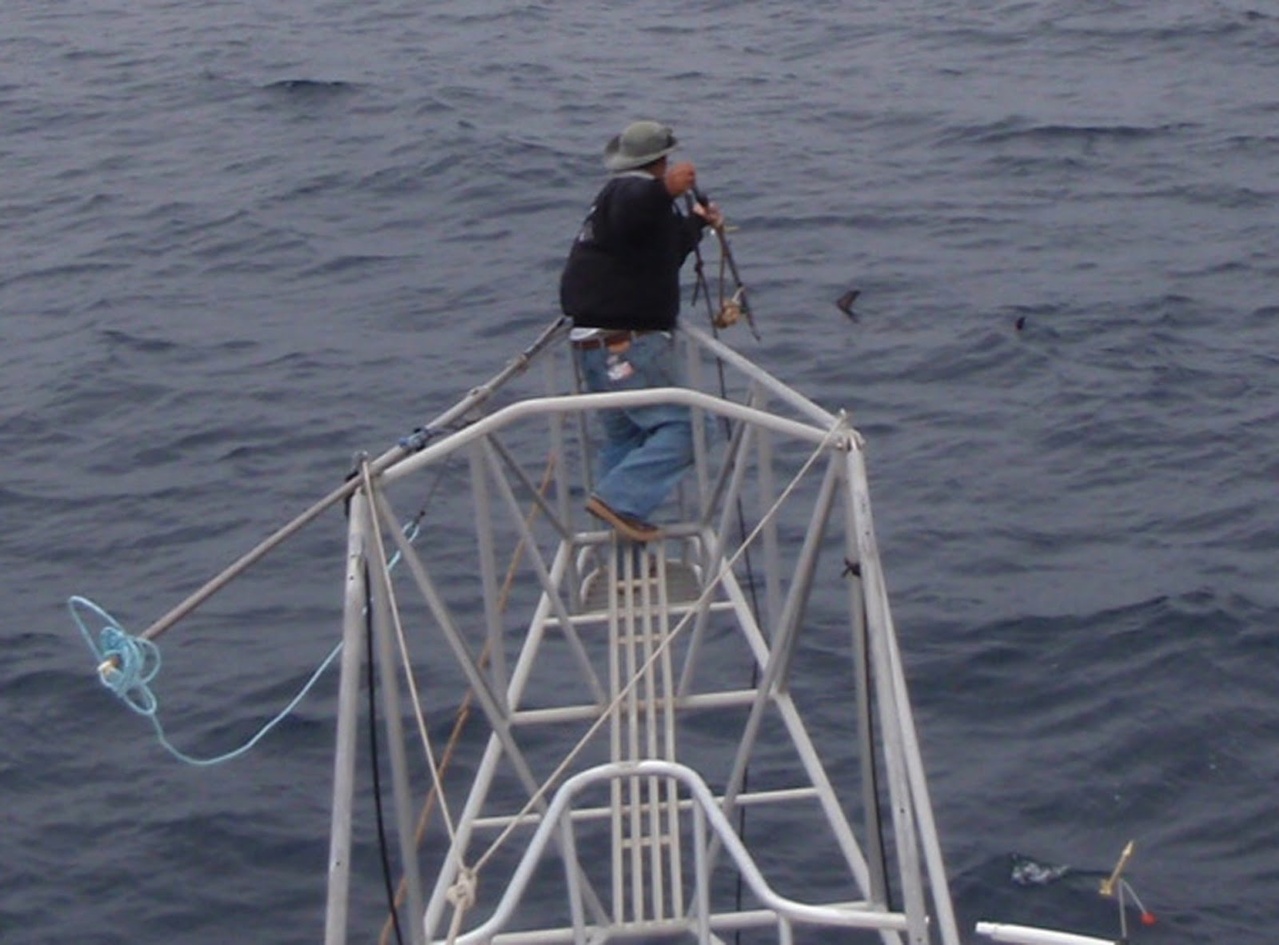 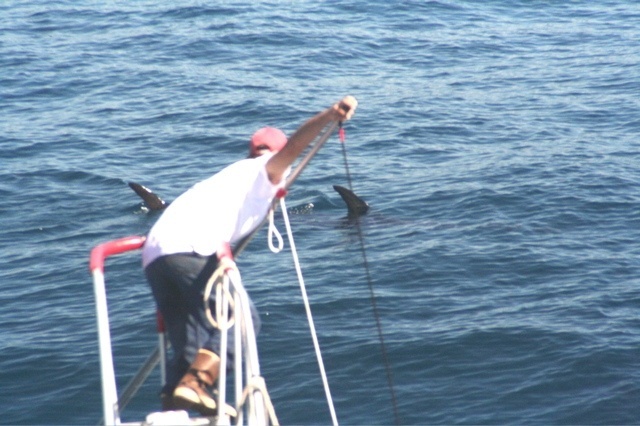