The James J. Howard Marine Sciences Lab is uniquely situated In the Mid-Atlantic, on the Sandy Hook peninsula located about 12 miles from New York City. With the Atlantic Ocean on one side and New Jersey bays and rivers on the other, the lab is uniquely positioned to conduct research in highly urbanized waterways. Yet we are within several hours of relatively undisturbed estuaries in southern New Jersey.

Our location within this busy metropolitan area allows us to work closely with interested international, federal, regional, state, and academic scientists, and to participate in undergraduate and graduate education programs as advisers and mentors.

The primary mission of the Howard Laboratory is to conduct research in ecology, leading to a better understanding of both coastal and estuarine organisms and the effects of human activities on nearshore marine populations.

The most unique aspects of the Howard Laboratory is its seawater system and laboratories, The lab houses organic and inorganic chemistry labs and several controlled temperature rooms. The seawater labs are designed to be flexible and adaptable to various types of experimental designs and aquaria. 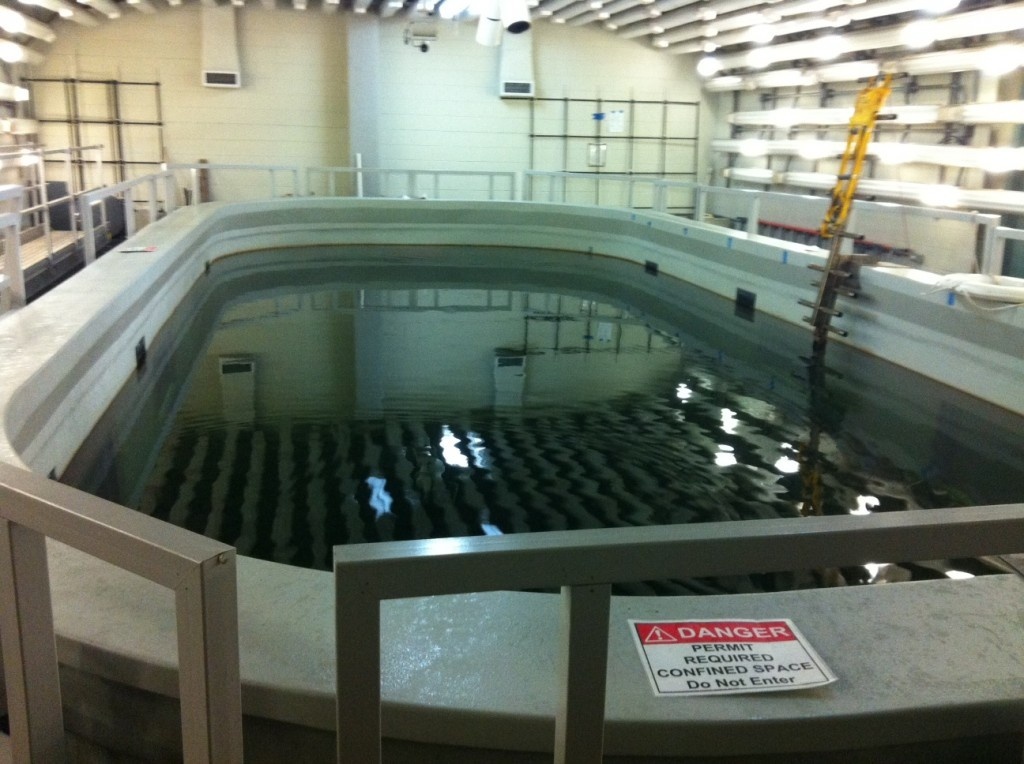 There are 12 research laboratories, including a large, two-story 32,000-gallon research aquarium. This aquarium is housed in a sound-retardant room with a programmable lighting system that allows us to simulate daily and seasonal changes in light intensity and photoperiod, for any time of the year and for any place in the world. Currently, one seawater lab contains twin 4000 gallon experimental recirculation systems that allow us to control water temperature and salinity for experiments, or for the growth and development of aquaculture species. A new recirculating aquaculture system is planned for construction in 2020. Another lab is dedicated to ocean acidification impacts on living marine resources.

The Howard lab also has several meeting and conference rooms.

The Howard Marine Laboratory was preceded by NOAA Fisheries' Sandy Hook Laboratory, which began operation at Fort Hancock in 1961. It was established as a research arm of the Interior Department's Bureau of Sport Fisheries and Wildlife, following passage of the Marine Game Fish Act in 1959, and became a regional center for research on marine game fish and the environment. In 1971, the laboratory became part of the newly formed National Oceanic and Atmospheric Administration and the National Marine Fisheries Service (now NOAA Fisheries). Research expanded to include studies of ecosystem responses to toxins and other environmental degradation, focusing on the New York Bight, where inshore impacts were profound. In 1985, the Sandy Hook Laboratory was destroyed by arson. Most equipment, and a 33,000 volume fisheries library were lost. After the fire, the staff moved into trailers and old former army barracks to carry out modest experiments in limited space. In 1986-87, New Jersey was selected as the location for constructing a new facility close to the former laboratory site. At the groundbreaking ceremony in 1989, the new lab was named the James J. Howard Marine Sciences Laboratory after the late James Howard, U.S. Representative of New Jersey's 3rd District, who led the lab rebuilding effort.