The purpose of Amendment 5b to the 2006 Consolidated Atlantic Highly Migratory Species (HMS) fishery management plan (FMP) is to end overfishing on, and rebuild the dusky shark stock. Draft Amendment 5 to the 2006 Consolidated HMS FMP (77 FR 73029) proposed measures were designed to reduce fishing mortality and effort in order to rebuild various overfished Atlantic shark species, including dusky sharks, while ensuring that a limited sustainable shark fishery for certain species could be maintained.

After reviewing all of the comments received on Draft Amendment 5, NOAA Fisheries concluded that further analyses were needed for dusky shark measures and decided to do so in a separate FMP amendment, environmental impact statement, and proposed rule.  The FMP amendment for non-dusky shark species (scalloped hammerhead, sandbar, blacknose, and Gulf of Mexico blacktip sharks) included in draft Amendment 5 was renamed Amendment 5a and was developed into a final rule and final environmental impact statement. The future FMP amendment for dusky sharks was renamed Amendment 5b and focused on:

If you have any problems accessing these documents, please contact nmfs.sf.webmaster@noaa.gov. 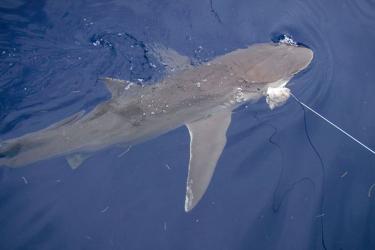 Last updated by Office of Sustainable Fisheries on 08/29/2019