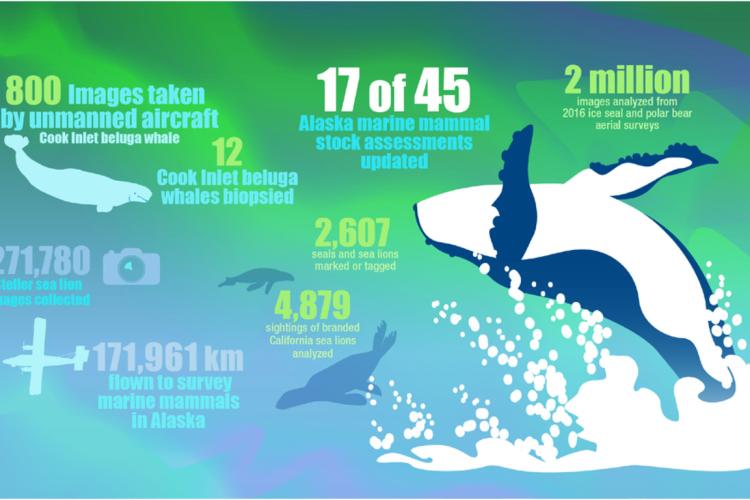 Our marine mammal research involves collecting information that agency managers and other constituents need to make informed management decisions to comply with the Endangered Species Act, the Marine Mammal Protection Act and other relevant statutes to protect whales, seals, porpoises and sea lions in Alaska. Some marine mammal populations are a primary food source for Alaska Native communities and we provide science expertise to Alaska Native Commissions responsible for co-managing these harvests with NOAA Fisheries. With support from the Bureau of Ocean and Energy Management we have been able to conduct a multi-disciplinary survey of the Bering and Chukchi seas that involved passive acoustic monitoring, biological and physical oceanographic sampling, and aerial and shipboard visual surveys for marine mammals and seabirds. Data collected through this research informs population assessments for a wide variety of species and is used by NOAA managers and by other management bodies (notably the International Whaling Commission).

As part of the NOAA Fisheries Species in the Spotlight initiative, we began several new studies on the endangered Cook Inlet beluga whale population, including genetic research and use of hexacopters to photograph the whales. Through the hexacopter project, conducted in collaboration with the Southwest Fisheries Science Center and the Alaska Department of Fish and Game, scientists hope to monitor calf production and learn more about whale injuries and disease, which is important for conservation and recovery efforts. This work complements ongoing acoustic studies by NOAA Fisheries affiliates to learn more about beluga whale hearing and the impact of human-generated sound on this endangered species.

We participated in an International Whaling Commission survey of whales in the Bering Sea. We used passive acoustic monitoring (e.g., sonobuoys) for the first time on this survey to locate and collect critically needed genetic information on two eastern North Pacific right whales. This is the world’s smallest whale population, with an estimated 30 animals remaining.

We conducted extensive surveys of harbor seals in southcentral and western Alaska, including Cook Inlet, Iliamna Lake, Kodiak Archipelago, Bristol Bay, and the eastern Aleutians. Many areas were surveyed in both June and August to study the transition from molting, which occurs in August, to pupping, which occurs in June each year. These surveys are
needed to investigate whether a change in historical survey protocol would result in improved information on the number of pups born and the proportion of seals on shore and available for counts. Surveys were also conducted in collaboration with the National Park Service to study the behavior and movements of harbor seal pups in tidewater glacial fjords. This research is increasingly important to help ensure responsible wildlife viewing given the growing numbers of tour vessels visiting the area, warmer water temperatures, and changing ocean habitats.

Polar bears and seals are vital resources for northern coastal Alaska Native communities and are key species in Arctic marine ecosystems. Yet no reliable abundance estimates are available for vast portions of their ranges. In 2016, we conducted aerial surveys in partnership with the Russian Federation and the U.S. Fish and Wildlife Service to monitor ice-dependent seals, including bearded and ringed seals, and polar bears in the Chukchi Sea. In 2017, we completed image analysis on two million infrared and high-resolution color images collected from surveys.

Northern fur seals breed at six locations in the North Pacific and Bering Sea. Three of these locations--Pribilof Islands, Bogoslof Island and San Miguel Island--are in the United States. The Pribilof Islands population has declined dramatically in recent decades and efforts are underway to understand the cause of the decline. Three hundred pups were marked so we can follow them throughout their lifetimes, adding to our understanding of fur seal behavior and migrations.

During the years 2013-2016, NOAA Fisheries declared an Unusual Mortality Event for California sea lions due to consecutive years when emaciated sea lion pups were found along the California coast in high numbers. Our research this year detected the end to this Unusual Mortality Event. Our scientists assessed the growth rates of California sea lion pups born in 2016 (from birth to 7 months) and for animals born in 2017 (from birth to 4 months of age). Pups in both years grew at average or above average rates, suggesting that they were getting sufficient nutrition from their mothers and that their mothers may have had an easier time finding food for themselves than in previous years.

We conducted a biennial survey of Steller sea lion abundance in Alaska. This year, the survey included an aerial photographic survey of Southeast Alaska through the Shumagin Islands in the Western Gulf of Alaska. During the 57 flight hours, 20,407 images were collected. An uncrewed hexacopter was also used to survey sites in the central Aleutian Islands that couldn’t be surveyed in 2016. We are able to monitor trends in Steller sea lion abundance through long-term surveys like this, which is critical for effective conservation and recovery efforts. New approaches are being used to streamline data processing, including a Zooniverse site and a crowd-sourced competition to develop an algorithm to automatically count sea lions in images.

Comparisons of Manned vs Uncrewed Surveys to Assess Cetacean Density

A field comparison of manned and uncrewed aerial systems (UAS) surveys of large cetaceans in the Arctic was completed in 2015 with support from the Navy and the Department of the Interior and the Bureau of Ocean and Energy Management, and through a partnership with the North Slope Borough and Shell Oil. In 2017, the results showed that estimates of cetacean abundance were similar using either aerial platform, but the abundance estimates calculated from images collected by the UAS were less precise than the estimates calculated from observations by human observers in the manned aircraft. The UAS surveys were limited by the same types of weather that limit manned surveys for cetaceans and were 10x more expensive (at current costs) than the comparable manned survey.